Will a Government Shutdown Cause the Market to Crash?

When you see markets rallying strongly without news, does it ever make you question whether there is something that drives the market besides for news?

This article was written on Sunday Dec 16: Last Monday, the market dropped over 70 points from its intra-day high to just below 2600SPX, and a reporter on television claimed it was due to the “postponement of the Brexit vote.” Yet, around mid-day, the market began to rally off its lows, and ended positive for the day. But, there was no substantive reason cited for this rally. The same television announcer simply noted that “stocks are rising after a wild day in the market yesterday.” Does that make “wild days” in the stock market a reason for a rally? I guess that is the best they could do when there was no news available to explain the rally.

But, could the market have rallied without news? I mean, nothing positive came last Monday to “cause” that turn-around in the market we saw that day!?

So, when you see markets rallying strongly without news, does it ever make you question whether there is something that drives the market besides for news? If not, it should.

Many of you question me about “what happens if” some event occurs that causes the market to tank. Well, those events usually are just coinciding with the market dropping rather than actually being the cause. Otherwise, how can you explain a market rally as being “caused” by a particular event, yet the market will also fall based upon the same event?

You have to learn to be a more discerning market participant, rather than simply buy into what you are told about markets. Rather than take “reasons” at face value, put some thought into what you are being told and ask yourself if this is an intellectually honest analyst you are listening to, or if they are simply providing you with a superficial perspective. The great majority of the time, you are listening to or reading a very superficial perspective about the market.

One such example is if you believe that a government shut down will certainly cause the market to collapse. Well, it certainly sounds good. It certainly makes sense since markets don’t like uncertainty. And, it certainly would fit many pundit’s narratives, especially if the market does drop in the coming weeks coinciding with a shut down. Unfortunately, history that not support such a premise. 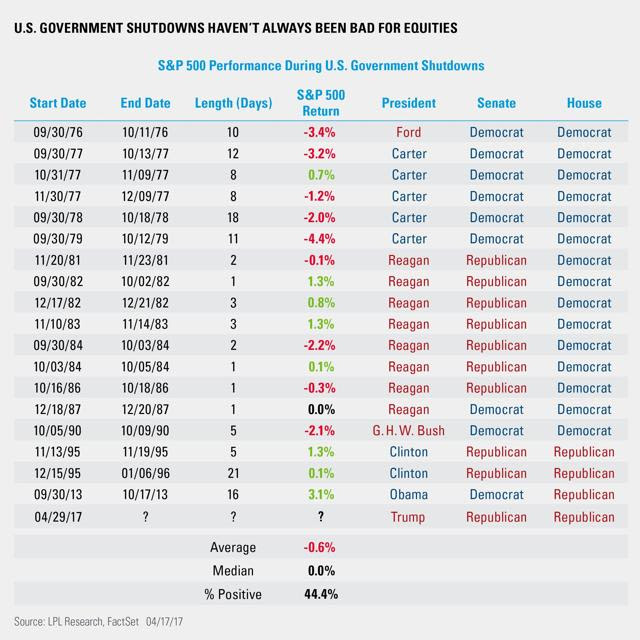 The truth is that what mattered most about how the market would react to a government shut down was whether the market was in a bull trend or a bear trend at the time of the shut down. Nothing more and nothing less. That really means that these events are meaningless to the market.

Of course not. It simply means that these exogenous events do not affect the market in the way many would expect from a “logical” perspective. And, do you know why that is the case? It is simply because the market is not a logical environment. Rather, it is an emotional one. And, exogenous factors are not as important to the market movements as so many erroneously believe.

Consider the conclusion presented in a paper entitled “Large Financial Crashes,” published in 1997 in Physica A.:

“Stock markets are fascinating structures with analogies to what is arguably the most complex dynamical system found in natural sciences, i.e., the human mind. Instead of the usual interpretation of the Efficient Market Hypothesis in which traders extract and incorporate consciously (by their action) all information contained in market prices, we propose that the market as a whole can exhibit an “emergent” behavior not shared by any of its constituents. In other words, we have in mind the process of the emergence of intelligent behavior at a macroscopic scale that individuals at the microscopic scales have no idea of. This process has been discussed in biology for instance in the animal populations such as ant colonies or in connection with the emergence of consciousness.”

In a 1988 study conducted by Cutler, Poterba, and Summers entitled “What Moves Stock Prices,” they reviewed stock market price action after major economic or other type of news (including major political events) in order to develop a model through which one would be able to predict market moves RETROSPECTIVELY. Yes, you heard me right. They were not even at the stage yet of developing a prospective prediction model.

However, the study concluded that “[m]acroeconomic news bearing on fundamental values explains only about one fifth of the movement in stock market prices.” In fact, they even noted that “many of the largest market movements in recent years have occurred on days when there were no major news events.” They also concluded that “[t]here is surprisingly small effect [from] big news [of] political developments . . . and international events.”

And, there have been many more such studies conducted over the last 30 years which have begun to pull back the curtain on what really drives our stock markets. Yet, many still hold fast to their old, outdated perspectives of market drivers, and are usually caught on the wrong side of a market move due to those expectations.

As I noted last week, the market has recently struck a top in the 2940 region when the fundamentals seemed to be strongest for the economy. So, when the market dropped over 300 points from that region, it certainly surprised many (while I had suggested to those following my analysis to move to cash on a break down below 2880SPX).

Currently, while I had wanted to see a larger rally take us above 2800 before we saw a bigger decline in the market, we are seeing signs that the rally to 2815 may have been all we see. Market resistance is now at 2635-55, followed by 2720. Unless the market can exceed those levels, and soon, we actually have a set up in place now to drop below the 2400-50 support I had wanted to see hold before a bigger rally takes hold. And, if this pattern triggers in the coming weeks, it will “feel” like a crash to many as we enter 2019. As always, we will be tracking this set up at ElliottWaveTrader as it continues to develop, and I have added a very detailed analysis this past weekend on what I am seeing in the market.

So, whether the government gets shut down or not, the market is in a precarious posture at this point in time. Moreover, it seems many who were not following our analysis about what the break of 2880SPX means to the market and did not see this potential drop coming are now trapped in their longs, wondering what to do, and hoping for a rally. Unfortunately, “hope” is probably the most dangerous four-letter word in an investor’s lexicon and the market may provide more pain to them before any rally is able to take hold.