USD/JPY: Threatening the Double-Bottom on a Duo of Negative Factors

USD/JPY is trading below 112.50, significantly lower on the day. A risk-off mood in markets supports the safe-haven Japanese yen.

USD/JPY is trading below 112.50, significantly lower on the day. A risk-off mood in markets supports the safe-haven Japanese yen. After stocks dropped in Wall Street, Chinese President Xi Jinping did not help improve the mood.

In a broad speech about economic matters, the president of the world’s second-largest economy did not offer any hints about a stimulus program, despite more and more signs that the Middle Kingdom is suffering a slowdown. The disappointment pushed the pair lower.

The second factor is related to the central event of the week and the US Dollar. The Federal Reserve is set to raise interest rates on Wednesday, but it seems that markets are beginning to lean towards a dovish hike. The Fed may imply a pause in rates, downgrading the dot-plot from a forecast of three hikes next year seen back in September.

The US Dollar is losing ground across the board amid this speculation, and the benchmark 10-year bond-yield is also on the back foot, falling below 2.83%, the lowest since August.

Later in the day, the US releases Housing Starts and Building Permits, but these are unlikely to steal the show from the speculation about the Fed and fears about the global economy. And later in the week, the Bank of Japan has its own rate decision, with no changes expected. 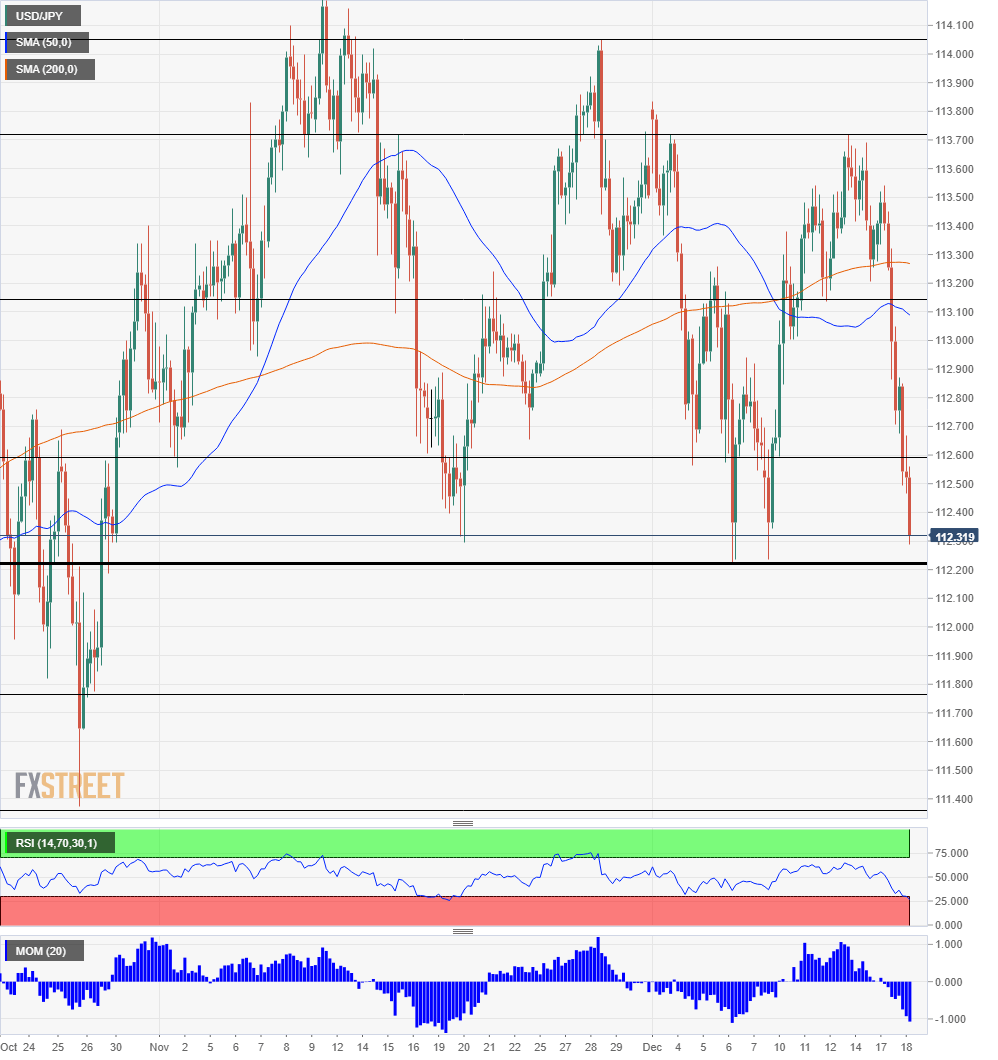 USD/JPY is trading closer to the all-important 112.20 level which provided support twice in early December, making it a double-bottom. A loss of this level opens the door to levels last seen in late October. 111.75 provided support in mid-Stepberm, and 111.35 was a critical swing low in October.

The pair may be limited in its downward moves by oversold conditions. The Relative Strength Index (RSI) on the four-hour chart is touching 30. Another drop may result in a bounce due to these conditions.

112.60 provided support in early December and switches to resistance. Further above, 113.15 served as support last week. The peak of 113.70, seen last week, is another cap.