Is It Time To Invest in Emerging Markets?

Valuations in emerging market stocks are quite compelling, but are the risks worth it?

Emerging markets have taken a beating in 2018.

For example, the iShares Core MSCI Emerging Market ETF () has underpeformed the S&P 500 by over 16% year-to-date:

The best time to buy stocks is when there is blood in the streets. Bad news, bad short-term outlooks, and high volatility give patient investors opportunities to achieve long-term outperformance. However, this has to be weighed against the risk of an investment becoming a value trap. Sometimes things are cheap for a reason, and only go lower from there.

Right now, the U.S. Federal Reserve is in the process of tightening its balance sheet, while the Bank of Japan, Bank of England, and European Central Bank are still easing theirs:

This makes it a challenging environment for American investors in international stocks.

The U.S. is gradually raising interest rates and performing quantitative tightening, and all else being equal, that leads to a stronger dollar. Investors can deposit money in dollars and get a small return of interest, while most other stable currencies will give them virtually zero interest. That increases the demand for dollars and increases the dollar’s value compared to a basket of global currencies.

For most countries, that’s not a big deal. But for a handful of emerging markets like Turkey and Argentina that have a large amount of debt in American dollars, that can lead to a massive problem. If the currency that they owe debt in is strengthening while their own local currency that they get most of their revenues in is weakening, the relative value of those debts increases tremendously, and becomes much harder to pay off.

For Argentina, it’s the government that holds the problematic foreign debt. For Turkey, their government debt is low but their corporate sector is what has a lot of American dollar debt. For Brazil, it’s a bit of both but not as concentrated. Each country has its own unique issues.

On top of a strong dollar, concerns about global protectionism abound. The current U.S. administration has imposed tariffs on allies and competitors alike, and has increasingly focused on taxing Chinese imports. If this ultimately reduces the competitiveness of Chinese products, it will drag on the Chinese economy. That’s why China has been one of the worst-performing emerging markets in 2018 despite the fact that their currency is rather strong.

Based on just about any valuation metric, emerging market equities are attractively priced. Here is a chart of global cyclically-adjusted price-to-earnings (CAPE ratios), for example, where red is expensive and blue is cheap: 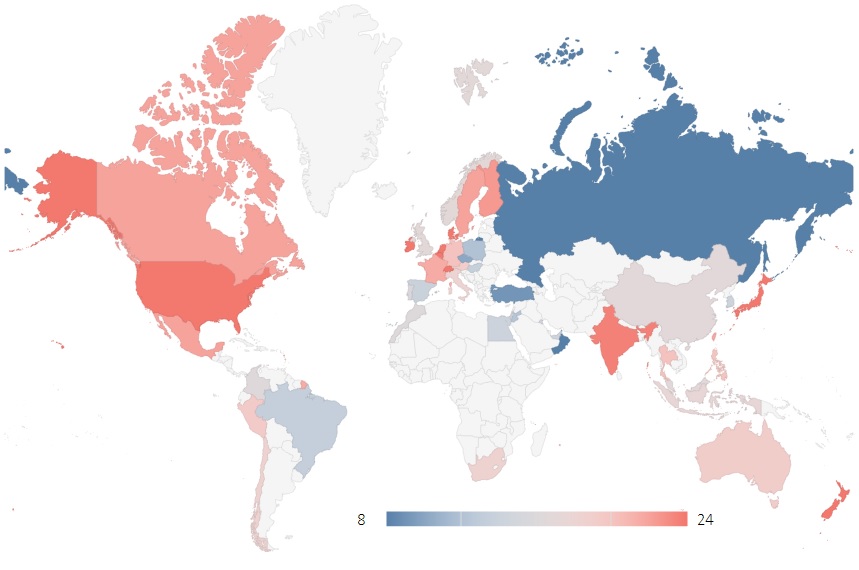 But also based on trailing P/E ratio, estimated forward P/E ratio, P/B ratio, or other metrics, many emerging markets are cheaply priced.

Russia is super cheap with a forward price-to-earnings ratio of less than 6 due to concerns about sanctions, slow growth, corruption, and their high concentration into energy. Even strong countries like Thailand are reasonably priced, with a well-diversified economy, a strong currency, and faster GDP growth than the United States but a forward price-to-earnings ratio of below 15.

Bargain-Hunting Pays Off… If You Can Handle The Volatility

Research by Mebane Faber, the co-founder and CFO of Cambria Investment Management, has shown that investing in the cheapest markets around the world historically pays well.

You’d have over three times more money by the end if you focused on the cheapest markets. But this would have been a brutal ride. You’d always be investing in countries with the most bad news and the most volatile markets. For contrarian investors with nerves of steel, it would have paid very well.

There’s no immediate catalyst that is likely to lead to emerging market outperformance in the next year or two. With the U.S. Federal Reserve on track to continue gradual monetary tightening, the dollar could continue to be strong and put pressure on emerging markets. However, if the Fed relaxes its rate-hiking policy, that could be a potential catalyst for emerging markets to recover some of their recent losses.

Basically, emerging markets could go lower in the intermediate term, especially the next time there’s a widespread recession. Investors in emerging markets need to accept that this type of volatility exists, because much of the capital in developing economies is foreign, and when investors around the world pull their money out, emerging markets have big valuation declines.

However, I do believe it’s time to nibble and to rebalance into emerging markets. Combining some domestic blue chip stocks with some foreign picks is likely a good balance. While there is a lot of short-term pressure against emerging markets, the cheap valuations of most of those markets position them well for long-term outperformance. Patient investors that begin to establish positions now, or re-balance their portfolios towards emerging markets, may be rewarded over time. And if emerging markets fall further, it will be another opportunity to add to your positions.

ETFs like the iShares Core MSCI Emerging Market ETF (IEMG) are among the easiest way to get emerging exposure. Single-country ETFs are a more selective way to invest in markets you think are well-positioned. You can focus on deep-value plays like Russia, or well-positioned picks like Thailand.

Buying individual emerging market stocks is also an option for active investors. There are hundreds of Chinese ADRs, for example, and tons more from Brazil, Russia, India, and other markets. For enterprising investors that are willing to invest directly on foreign exchanges, there are a lot of small and mid-cap picks with rather low trading volumes and lots of inefficiency compared to American stocks.