EUR/USD Forecast: Surges Over the Triple-Top But a Reality Check May Be Near

EUR/USD has been rising in response to growing speculation of a rate cut in the US.

EUR/USD is experiencing schadenfreude – a German word meaning pleasure derived from someone else’s misfortune. The world’s most-popular currency pair is on the rise as speculation of a US rate cut mounts.

The greenback was already on the back foot after US ISM Manufacturing PMI missed expectations with 52.1 points – the lowest level in 31 months. Moreover, US-Sino tensions expanded to visas for Chinese students studying in the US. The world’s largest economies continue tussling over technology and continue accusing each other for the failure of trade talks. Yields on 10-year and 2-year bonds have extended their drops, making the USD less attractive.

Yet things are not so rosy in the old continent as the fallout from the European elections threatens fragile coalitions. Italian PM Giuseppe Conte – who is not affiliated with any party – has warned the two coalition partners to stop squabbling and hinted he might step down. Relations between the League and the 5-Star Movement have been tense since the former beat the latter in elections. Moreover, both populist parties have differences over the budget and especially tax cuts.

The political situation in Germany – the continent’s largest economy – is also of concern to markets. Chancellor Angela Merkel’s government has received a lifeline from the SPD’s decision to stay in government. However, the center-left junior coalition partner has decided to hold a review of the partnership in the autumn. The party’s failure at the ballot box triggered the resignation of its leader Andrea Nahles – a key figure in bringing about the grand coalition.

The common currency’s troubles do not end with politics. Preliminary inflation figures for May are due today – an essential input for the all-important ECB decision on Thursday – and expectations are low. Consumer price index hit a high of 1.7%, and core CPI reached 1.3% year on year. However, that was only due to the change in the timing of Easter. A significant slowdown is projected now – potentially prompting a downgrade in the bank’s forecasts – and consequently a potential drop in the value of the common currency.

The next events to watch out for are speeches by Federal Reserve Chair Jerome Powell and New York President who will speak later in the day and may shed more light on the Fed’s thinking. Powell currently maintains his patient stance on interest rates – no more hikes but no cuts either.

Overall, if euro-zone inflation drops as expected and Powell keeps the door closed on rate cuts, EUR/USD may reverse its gains. 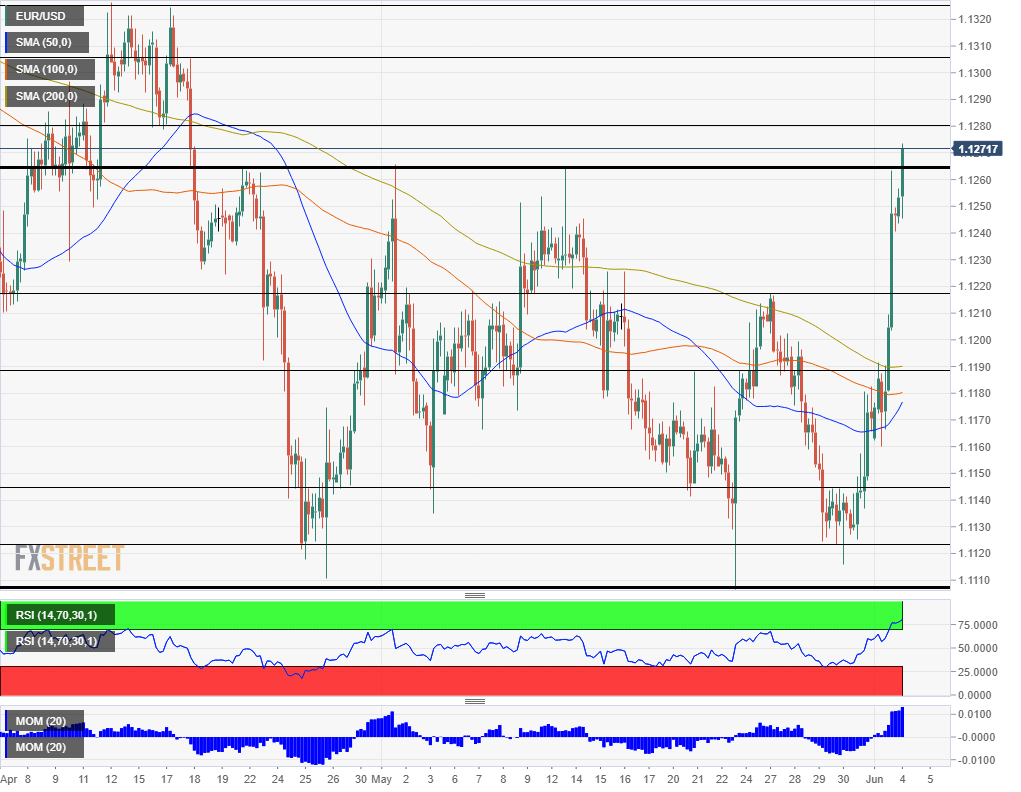 The Relative Strength Index on the four-hour chart is at 77, thus reflecting overbought conditions and signaling a possible downward correction.

On the other hand, EUR/USD surged above 1.1265, which capped the currency pair three times between late April and mid-May. Breaking above a significant resistance level indicates further gains – but EUR/USD has had its share of false breaks.

The next resistance line is close. 1.1280 provided support in mid-April and now turns into resistance. Further up, 1.1305 capped a recovery attempt around the same time, and 1.1325 was the high point in April.