Economic Dominoes Are Starting to Drop

The Fed waited too long to start exiting from crisis-era measures. It gave the economy time to go from “dependence” on easy money to outright “addiction.” 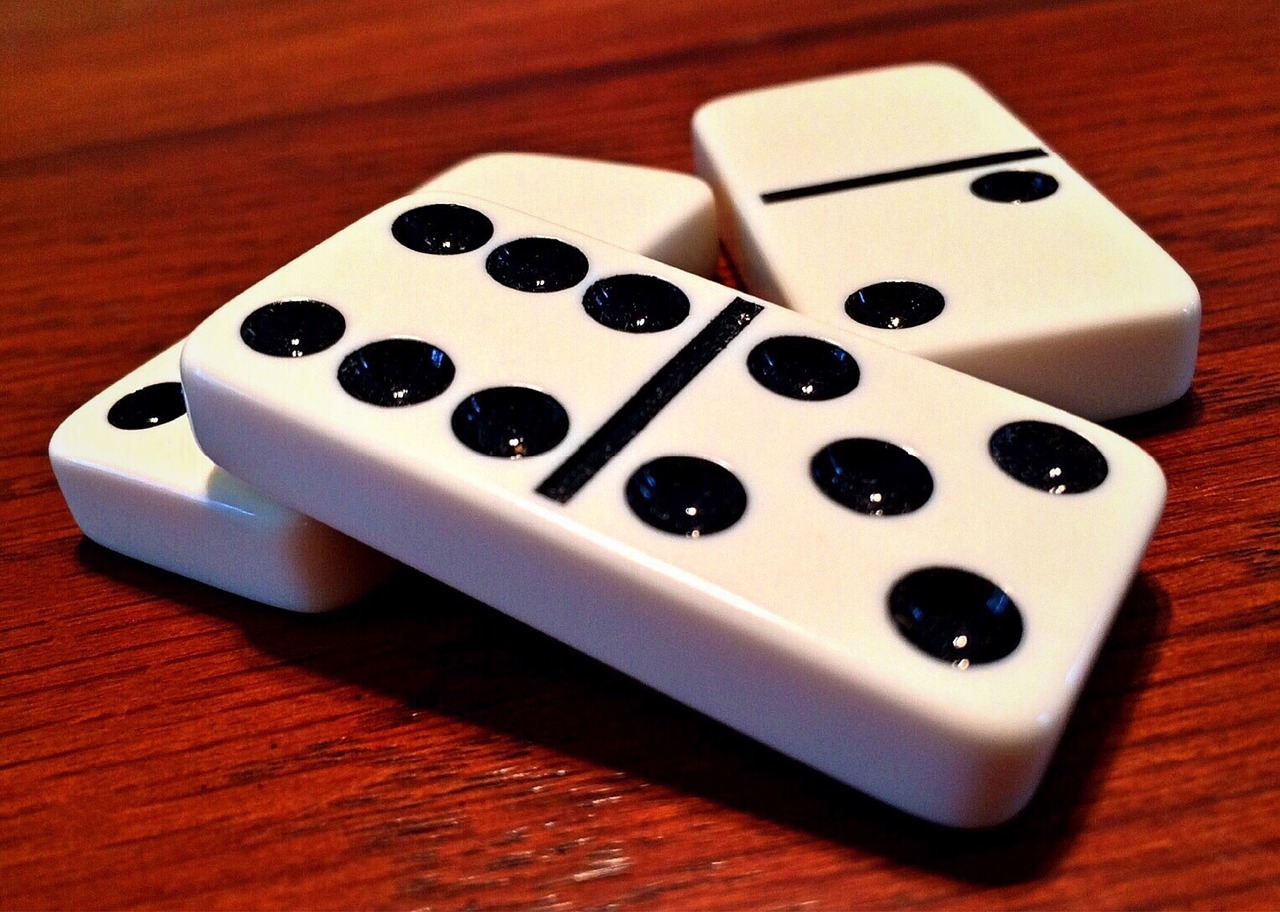 In the Great Recession, authorities faced enormous pressure to “do something.”

Letting nature take its course may well have been the best strategy. But it couldn’t happen that way in our political system. They had to act.

In 2008–2009, we got things like TARP—the Troubled Asset Relief Program that used $431 billion of your money to buy loans that banks no longer wanted on their books.

What we now forget is that TARP helped banks that weren’t even banks before that point. Goldman Sachs, Morgan Stanley, and numerous other broker-dealers and insurers hurriedly got bank charters specifically so they could be part of TARP.

The government welcomed it, too.

But these fiscal and regulatory surprises pale in comparison to the Federal Reserve’s unprecedented monetary actions.

Stimulus No One Expected

Compare that to the current cycle, where the Fed spent four years raising the rate from the zero level to the present 2.5%: The Fed is capable of moving rates far more aggressively than we have seen recently, and in either direction.

But the bigger and even more aggressive policy move was in asset purchases. It included but wasn’t limited to quantitative easing.

When the crisis hit, the Fed by law could only buy certain kinds of assets: Treasury securities, bank debt, federally-backed mortgage securities, and the like.

It didn’t change the rules but instead stretched them far beyond what anyone envisioned could ever happen.

That hockey-stick jump in the next chart wasn’t on anyone’s radar, but it happened. The Fed then added several more rounds before finally topping out and recently beginning to exit. Was any of this the end of the world? No.

The markets absorbed it all and even performed well. In fact, markets performed well because they absorbed all this craziness. In that, lies the seed of our next cycle.

My friend William White recently had an interview with a Swiss newspaper. Bill is the former chief economist with the Bank for International Settlements and my favorite central banker.

In discussing the current move to loosen policy, the reporter asked, “How did we end up in the debt trap?” Bill’s answer:

We were encouraged to do this. Just think what we have been doing since 2007. Monetary easing is an invitation to take on more private sector debt. And fiscal expansion is by definition an increase of government debt. Both instruments carry the risk of higher debt levels that eventually will kill you.

That may seem counterintuitive, since recessions supposedly bring deleveraging. That happened, but not uniformly. Some deleveraged while others added more, and the latter group was much larger.

And the Fed’s vast liquidity injections enabled it.

According to the Institute for International Finance, global debt was $244 trillion as of Q3 2018. More than half of it was financial and non-financial corporate debt. About 27% ($65 trillion) was government debt (not counting unfunded liabilities, which are huge).

While US households retrenched in the recession, corporations did not limit themselves like families did. Here’s nonfinancial corporate debt growth for that same period (2003–2018). 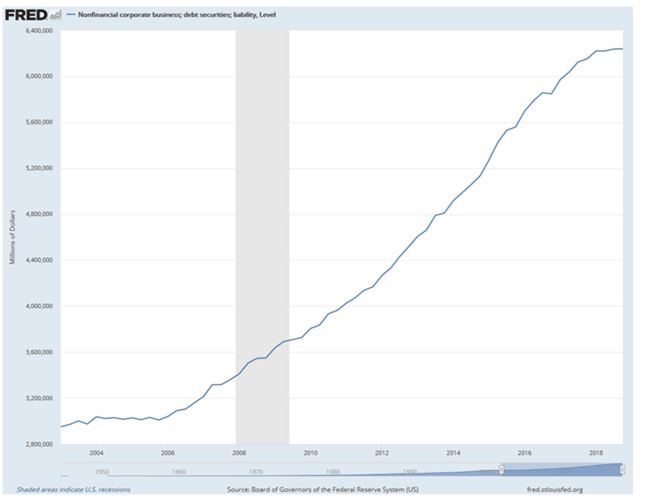 The recession (shaded area) had almost no effect on corporate debt growth, which continued merrily higher.

Note that this is only securitized debt; much more exists on private books. You could argue that the added debt is not so dramatic as a percentage of GDP, which also grew in this period. That’s true, but it’s also riskier debt. The proportion of bonds at junk or near-junk status has grown significantly.

The Fed is now at least pausing that experiment and appears set to reverse it later this year. I fear it is acting too late.

The latest corporate earnings news and lots of other data suggest the cyclical weakening has begun. The next marker will be some high-profile debt defaults, probably among lower-rated issuers.

I don’t know who: WeWork, Tesla, name your favorite. But somebody is going to run out of cash and find themselves unable to refinance for the 97th time. And then the real fun will begin.

The Fed waited too long to start exiting from crisis-era measures. It gave the economy time to go from “dependence” on easy money to outright “addiction.”

And as we all know, addictions are very, very hard to break. So now the Fed has cold feet, too.

Further tightening appears unlikely. The Fed will try to cut rates as the weakness grows more obvious, but it won’t help. And it will start digging through the toolbox for something else to try.

Whatever the Fed does will probably surprise and alarm us. It will not have the desired effects, at least not as fast as it wants. But it also won’t kill us if we prepare for it.

The dominoes are starting to drop as expected. To review…

Working off that debt will take years, possibly decades. Hence the long, slow Japanization I’ve described. I don’t think we will endure it for 30 years like Japan has. We will instead force a worldwide default, which I’ve dubbed the “Great Reset”.

Beyond that lie better times. But we’ll go through hell first.