If you own a fund that tracks a broad-based commodity index, then you're probably underinvested in gold.

The U.S. was founded 243 years ago, and in that time it’s amassed some $23 trillion in debt and counting. As staggering as this number is, it’s still less than half what Elizabeth Warren says her government-run “Medicare-for-all” program would cost… over only 10 years.

The Massachusetts senator and presidential contender made the announcement Friday morning, responding to critics who’ve demanded to see some details on her ambitious proposal. According to her campaign, the price tag to provide Medicare-style health care to every American would be “just under $52 trillion.”

To put things in perspective, that’s close to one-fifth of the total wealth in the entire world, which Credit Suisse estimated to stand at $280 trillion in 2017.

The $52 trillion is just the nominal price tag. It doesn’t take into account incidental costs, such as what to do about the estimated 2 million Americans who would lose their jobs should private insurance be eliminated. And because the plan would be covered in part by tax hikes on employers, the ultra-wealthy and financial transactions, companies may be less inclined to hire, and people may be less inclined to invest.

According to Sarah Bianchi, macro research analyst at Evercore ISI, even Democratic House Speaker Nancy Pelosi has strong reservations against the proposal because of its steep expense. An Affordable Care Act (ACA) improvement plan, she says, seems far more likely.

The 2020 election is only 12 months away. Early signs point to another term for Donald Trump, according to Moody’s Analytics presidential election model, which has a near-perfect record at predicting outcomes. But impeachment risks are mounting, and Warren is leading the Democratic polls.

I urge investors to prepare for potential market volatility and currency devaluation. Gold and gold stocks have historically been excellent diversifiers in such times, but new research from the World Gold Council (WGC) shows that most investors are radically underexposed to the yellow metal, even when they believe otherwise.

I talked briefly about the WGC’s research about a month ago. The gist of the study is that investors may assume they have adequate exposure to gold because they’re invested in a fund that tracks a broad-based commodity index. The problem with this assumption is that most major commodity indices have a relatively small weighting in gold, and so their gold exposure is much smaller than they realized. 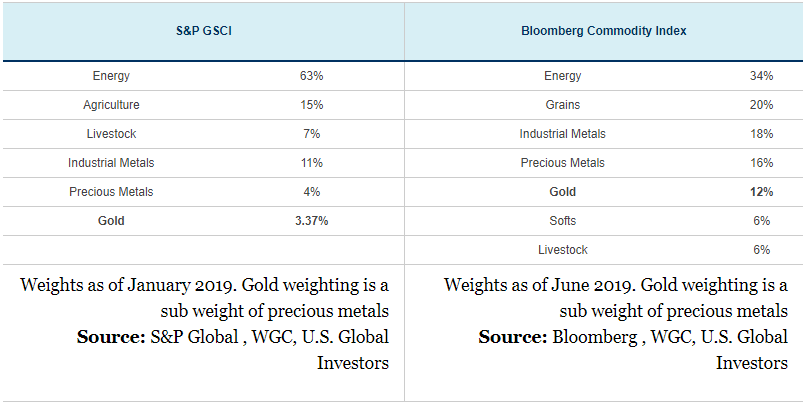 Take a look at the tables above. The S&P GSCI, which tracks 24 commodities, has only a 3.37 percent weighting in gold. The Bloomberg Commodity Index is slightly better, with a weighting of 12 percent. These percentages shrink even more when you consider that commodities in general represent a small portion of most investors’ portfolios.

“If you are buy-and-hold investor, if you are trying to create long-term strategies, the evidence overwhelmingly shows that gold is a more effective strategic asset than commodities alone,” explains the WGC’s director of investment research, Juan Carlos Artigas, who I had the opportunity to chat with recently.

To illustrate Juan Carlos’ point, look at the following chart. In the 20-year, 10-year and five-year periods through June 2019, gold outperformed all other commodities, including energy, industrial metals and precious metals. Despite this, gold may still be under-represented in some investors’ portfolios. 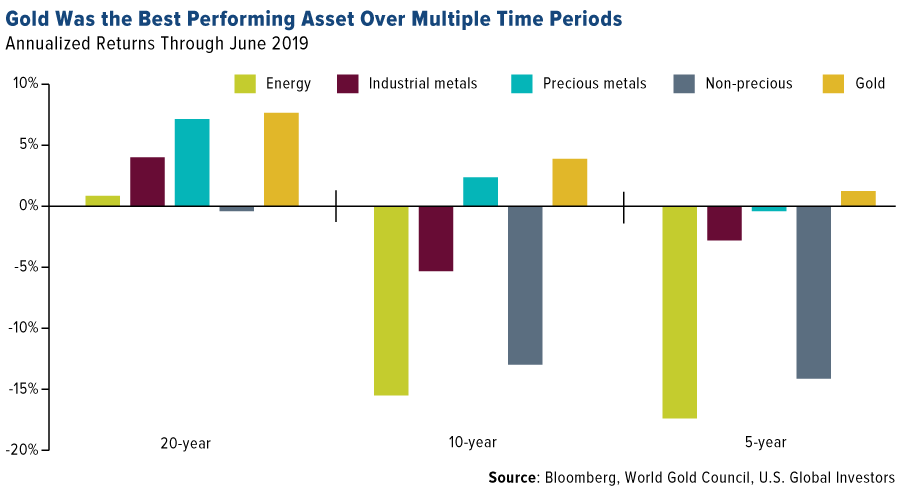 “The optimal weight for gold, or the amount of gold that can help investors get better risk-adjusted returns, is between 2 percent and 10 percent,” Juan Carlos says.

Loyal readers know this is mostly in line with my own recommendation of a 10 percent weighting in gold, with 5 percent in bullion, the other 5 percent in high-quality gold mining stocks.

At the same time that gold is largely under-represented in many investors’ portfolios, those “in the know” have been buying at a healthy clip. In fact, since the start of the most recent gold price rally, holdings in gold-backed ETFs have climbed to an all-time high. Holdings as of September stood at more than 2,855 tonnes, surpassing the previous high of 2,839 tonnes in November 2012.

With bond yields at historic lows at the moment, “gold may become an attractive and more effective diversifier than bonds, justifying a higher portfolio allocation than historical performance suggests,” the WGC writes in its latest report, “It may be time to replace bonds with gold.”

Speaking of gold ETFs, our webcast with my longtime friend and mentor, Pierre Lassonde, was held last week, and by all measures, it was a huge success. I’ve participated in a number of webcasts over the years, but never one with so many registrants and attendees.

I expected no less from the cofounder of gold royalty company Franco-Nevada [, ], whose stock is up more than 473 percent since its IPO in December 2007. That’s enough to beat Warren Buffett’s Berkshire Hathaway by a multiple of nearly four. 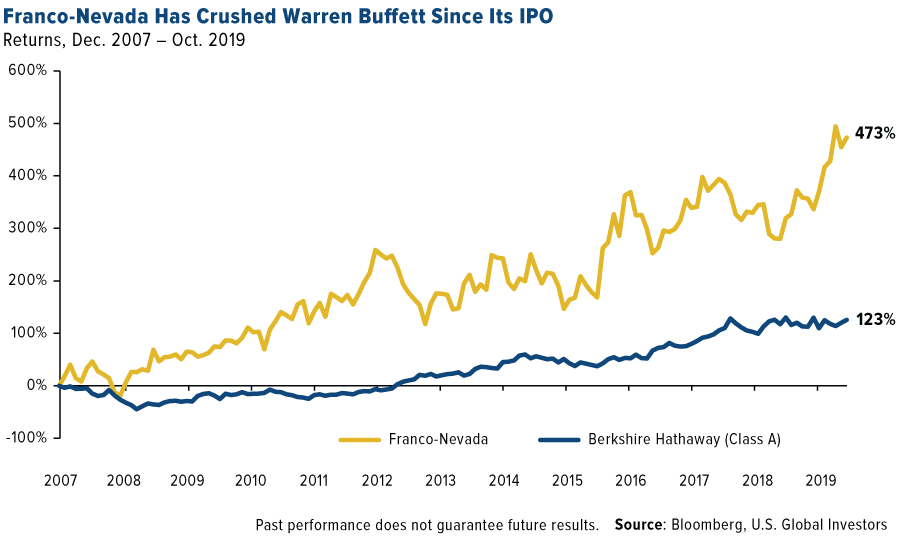 Buffett, as you probably know, is famously not a fan of gold, saying at one point that “it doesn’t do anything but sit there and look at you.”

His low opinion on the yellow metal is in stark contrast to other big-name investors, including Ray Dalio, Stanley Druckenmiller, Jeffrey Gundlach, Paul Tudor Jones, Seth Klarman, Bill Gross, Sam Zell, Mark Mobius and many other billionaires who have embraced the yellow metal.

With all due respect to Buffett, maybe he should reconsider gold. After all, he changed his mind about airlines. Years after quipping that a “farsighted capitalist” should have shot down Orville Wright at Kitty Hawk and “done his successors a huge favor,” the Oracle of Omaha now owns millions of shares in all four of the major domestic airlines.

“Warren Buffett loves franchises,” Pierre said during the webcast, “and there’s no greater franchise in the world than Franco-Nevada.”

Franco-Nevada investors would no doubt agree. In the past 10 years, the company’s average dividends per share (DPS) growth rate was nearly 20 percent per year.

As Pierre put it, “We could send everyone at Franco-Nevada to Hawaii for 30 years and still be able to afford to continue raising our dividends.”

If you weren’t able to listen in, you can still get the replay by emailing us at info@usfunds.com!