Hint: It's NOT tensions with Iran and North Korea. 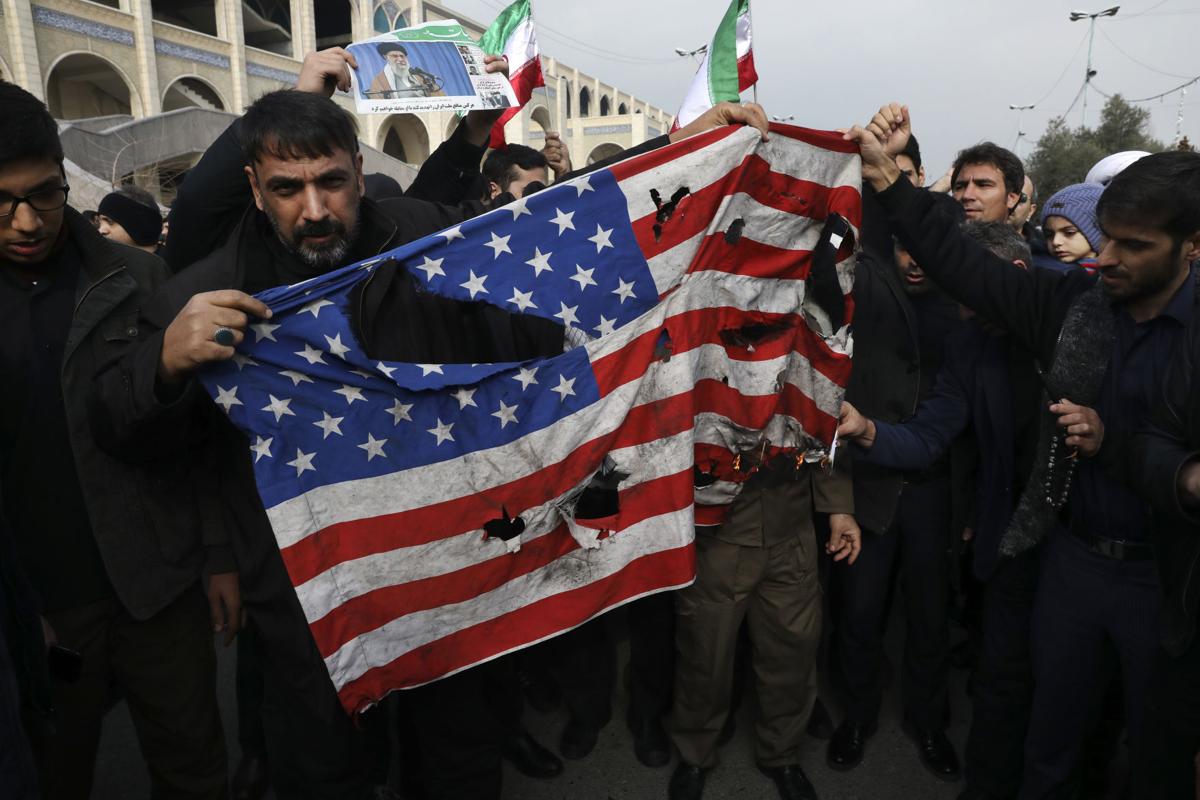 Fred Imbert of CNBC reports the Dow drops the most in a month after US airstrike on Iran’s top military leader spooks investors:

U.S. crude oil futures settled up 3% at $63.05 per barrel and briefly gained 4.8%, raising concerns about an energy shock on the global economy. Airline stocks fell broadly on the threat of higher oil prices. United, American and Delta all dropped more than 1.6%.

“Global oil markets will be volatile for weeks to come,” said Greg Valliere, chief U.S. policy strategist at AGF Investments, in a note. “There’s a reason, finally, for caution in the stock market.”

“Eventually there will be an uneasy truce … But that’s a long, long way off; this will get worse before it gets better,” he added.

Energy stocks such as Concho Resources and Apache went up 3.7% and 1.3%, respectively. Devon Energy climbed 1.2%.

A weaker-than-expected reading on the manufacturing economy also weighed on stocks. December’s ISM manufacturing index came in at 47.2, the weakest in a decade and smaller than the 49 reading expected by economists polled by Dow Jones.

Investors largely fled risk assets such as stocks in favor of gold and Treasurys and other traditional safe havens. Gold futures jumped more than 1%. The benchmark 10-year Treasury yield, which moves inversely to the price, dropped to around 1.79%.

The U.S. announced late Thursday that it had killed Iran’s top commander, Gen. Qasem Soleimani, in Baghdad in an airstrike. Soleimani had been a key figure in Iranian politics, and his death has raised concerns over a potential retaliation from the Iranian forces.

Iranian Foreign Minister Mohammad Javad Zarif warned on Friday that Iran would retaliate against the U.S. for its actions.

“It’s a game-changer,” Dryden Pence, chief investment officer at Pence Wealth Management, told CNBC’s “Squawk Box” on Friday. “We now have vast, broader array of weapons systems that the president has at his disposal. We’ve been able to weaponize economic sanctions now where we can go after individuals … but now I think the ultimate sanction that the president is able to use is an airstrike.”

Pence added, however, that any market volatility “will be short-lived.”

Wall Street loaded up on safer assets on fears that an oil spike might spark a recession. That risk is also heightened by the fact that the global economy has been struggling amid a global manufacturing slowdown.

The market moves come after U.S. equities rose to all-time highs on Thursday on the back of a strong performance in the tech sector. The Dow surged more than 300 points on Thursday, while the S&P 500 and Nasdaq gained 0.8% and 1.3%, respectively.

However, the optimism entering the new year seems to be fading amid political tensions, including North Korea and the impeachment of President Donald Trump.

I wasn’t going to post any market comment today but I think it’s very important to understand that tensions with Iran and North Korea are not driving markets, the US economy is slowing and that’s what is unnerving investors.

When you see an ISM reading below 50, it signals the US economy is contracting and it is a leading indicator of economic activity.

That’s why US long bonds (TLT) rallied Friday as the yield on the 10-year US Treasury note fell almost 10 basis points to 1.79%:

Not surprisingly, stocks got slammed Friday led by losses in Materials (XLB), Financials (XLF), Tech (XLK), and Consumer Discretionary (XLY), all of which were strong coming into the new year: 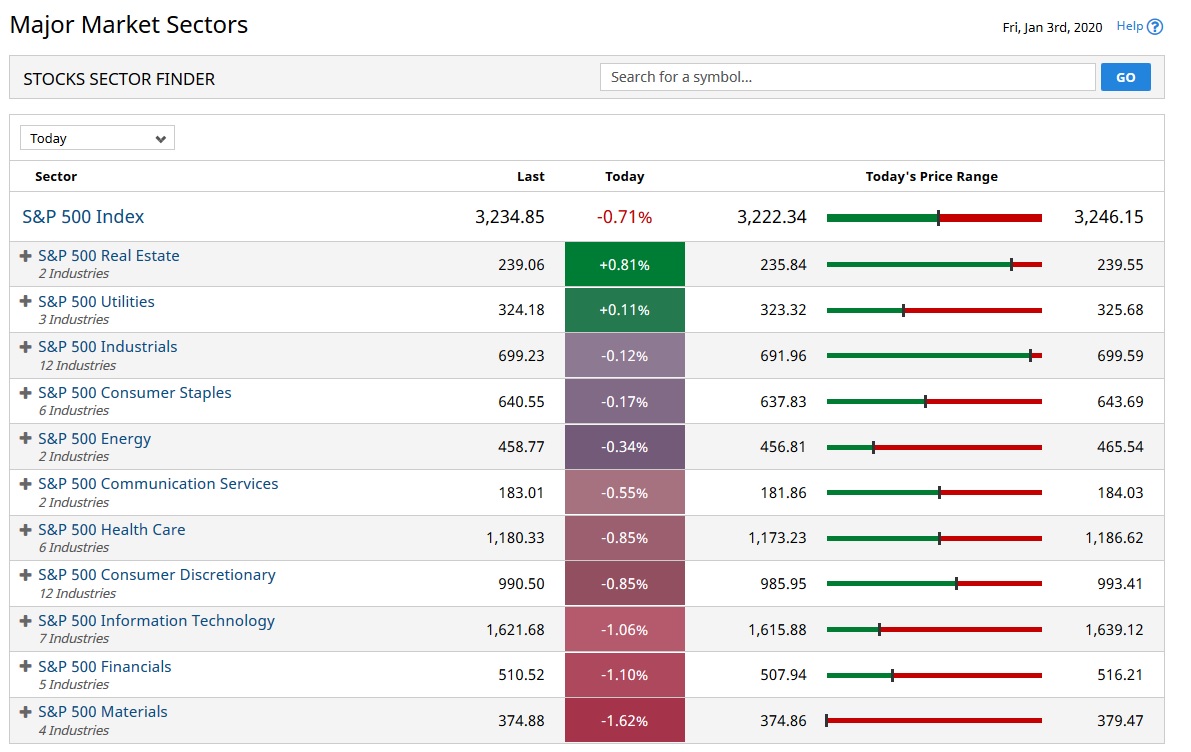 But one day doesn’t make the year. As shown below, the S&P 500 ETF (SPY) and Technology Index (XLK) are still in hyper bullish mode despite Friday’s pullback.

What remains to be seen is whether this is the beginning of a more protracted pullback or just a small correction before stocks resume their uptrend.

I’ve already gone over my Outlook 2020 in detail, stating as long as the Fed is pumping billions into the financial system, it’s hard seeing a major correction (20% or more) in stocks, but we will see many pullbacks on trade or other geopolitical tensions.

Still, if the US economy is slowing, you will see major downward earnings revisions, and that can impact multiple expansion. In fact, the ISM Manufacturing index leads earnings revisions and that’s why investors pay close attention to it.

Also, I was reading what top strategists on Wall Street see ahead and while most are bullish, some are a lot more cautious:

Wall Street thinks the longest bull market in history is set to ride into the next decade.

“Rising political and policy uncertainty will keep the index range-bound” for most of 2020, wrote David Kostin, chief U.S. equity strategist at Goldman Sachs. He predicts the S&P 500 will hit 3,400 by year-end, up 5.7 percent from current levels, as equity markets typically outperform under a divided federal government. Equities are also expected to benefit from ongoing U.S. economic tailwinds.

A strong stock market is typical during election years.

Wells Fargo Institute crunched the numbers and found that the S&P 500 has experienced only four losing presidential election years out of the last 23 on a total return basis, gaining 11.3 percent on average.

JPMorgan Strategist Dubravko Lakos-Bujas sees pro-growth election-year rhetoric, the partial U.S.-China trade deal, a global cycle recovery and neutral investor positioning lifting the S&P 500 by 5.8 percent to 3,400 next year. He expects “most, if not all, of the market upside to be realized ahead of the U.S. elections.”

Meanwhile, Savita Subramanian, head of U.S. equity and quantitative strategy at Bank of America, thinks “trade risk has moderated and macro signals are showing signs of stabilization.” She thinks the S&P 500 will edge up 2.5 percent in 2020 to 3,300 driven almost entirely by multiple expansion.

But not everyone on Wall Street is bullish.

Mike Wilson, chief U.S. equity strategist and chief investment officer at Morgan Stanley, thinks the Fed expanding its balance sheet at a pace of $60 billion a month will goose the S&P 500 to a high of 3,250 in early 2020, but expects that rally to dissipate by April. His base case 2020 S&P 500 price target of 3,000 is nearly 7 percent below where the index finished 2019.

“The U.S. remains our least preferred region, given limited scope for multiple rerating or incremental flows, and earnings expectations that look materially too high to us,” Wilson said.

Francois Trahan, strategist at UBS, matches Wilson in his bearishness with a year-end target of 3,000, arguing that overly optimistic investors, a looming earnings decline a slowdown in the economy are the reasons why stock-market risks are skewed to the downside in 2020.

Trahan sees U.S. equities heading lower in the first half of the year before recovering just in time for the election.

“If history was a perfect guide, then the U.S. economy would bottom exactly as interest rates suggest in November of 2020 and equities would begin to discount that in Q2 ’20 or thereabouts,” he said.

I’d pay very close attention to what Francois Trahan has to say, he’s not the best market timer (nobody is) but he sure understands the macro environment better than anyone and knows how to position a portfolio in terms of sector rotation ahead of the trade.

So, to sum up this short market comment, the first of the year, I stil see plenty of liquidity driving risk assets higher in the near term but I’m worried about the US economic slowdown and think we will see some sharp pullbacks along the way.

What really concerns me is what happens when the Fed and other central banks start pulling back their asset purchases, then it’s lights out for this liquidity-driven market.

In fact, Jim Bianco of Bianco Research just posted a great comment on Bloomberg on why he thinks central banks are the biggest risk to the economy in 2020. The chart below he posted speaks for itself:

It’s quite evident central banks are trying to fight the specter of global deflation by creating asset inflation but it’s a dangerous strategy that could backfire in a spectacular way and wreak more havoc down the road.

Below, Jim Bianco, Bianco Research, explains why the Fed is doing something it hasn’t done since Y2K and it could spark a selloff. I agree, massive liquidity in response to a repo crisis which hasn’t materialized only stuffs the banks with cash and reserves for taking on more risk and that never ends well.

Listen carefully to Savita Subramanian’s comments (minute 3:30) where she discusses why earnings revisions will trend downward. Interestingly, on that show on Thursday, she also said she thinks stock buybacks won’t be anywhere near as strong in 2020 because “investors are worried about companies taking on more leverage to buy back their shares”. Let’s see if she will be right on that call.