A Perfect Storm: What Global Geopolitics Means for Uranium Investors

With minimal inventory available for immediate delivery, this opens up the potential for a big squeeze.

I don’t know anyone else other than myself in the financial world who has written two bestselling books and both books include a chapter about uranium. As one of the few professional investors and the largest independent financier who has invested in uranium for over 20 years, I can say uranium is creeping closer to its final inflection point.

In July 2022, the EU stated that nuclear power would qualify as a green investment beginning in 2023. That’s a monumental statement. It paves the way for a plethora of tax and policy incentives to build out nuclear power plants. Then, in a major policy shift, Japan announced it’s going to restart several nuclear reactors over the next 12 months. The market for uranium stocks went bananas on the news. Most companies were up double-digit percentage points.

Understandably, the scars from Fukushima run deep in Japan. It was a horrific event and a major black eye for the uranium sector. Japan is the world’s third-largest economy and fifth-largest greenhouse gas emitter. It has been stretching its power grid to the max since the Fukushima meltdown in 2011.

Prior to Fukushima, 30% of Japanese electricity was produced by nuclear power. After Fukushima, Japan immediately shut down all 54 of its reactors. Today, nuclear power produces roughly 7% of Japan’s electricity. However, an earthquake recently knocked out power and stretched the remaining power lines beyond the max. This is the second major power crunch felt by Japan, which could have been avoided if the country was running a full power grid. Their politicians are left with few other options than to return to nuclear as a key source of baseload power.

To meet its global climate commitments, the country will need to restart almost every nuclear reactor it shuttered in the aftermath of the 2011 meltdowns. And then build more. It’s forecast that, to meet the Paris goals, Japanese nuclear power needs to make up 20% to 22% of its energy mix by 2030. That’s a three-fold increase from levels today!

With carbon prices in the EU making record highs recently, Japan’s pivot will be critical in the country’s energy policy. Worldwide, the energy transition and natural disasters are throwing new challenges at utilities, stretching grids and triggering blackouts. This threatens economies that are reliant on single fuel sources for large portions of their electricity generation.

Europe is caught in a firestorm of challenges as the continent once led the way in decarbonization efforts focusing on renewable power. However, retiring its nuclear and coal plants left it highly susceptible to Russian natural gas, which in the wake of the war in Ukraine has now created a continent-wide crisis.

On the other side of the world, China is feeling the heat, literally. The historic drought in China is one many citizens have never seen before. Extreme heat has taken its toll on China’s hydro generation, which accounts for 18% of the country’s electricity generation. Low flow rates reduce hydropower production. Contrary to its sustainability goals, this led to a slew of new coal plants being permitted.

I’ve long stated that uranium has the potential to play a key role in baseload power generation. As the only zero-emission baseload fuel option, it makes all the sense in the world for nuclear to be an important segment of global electricity provision. 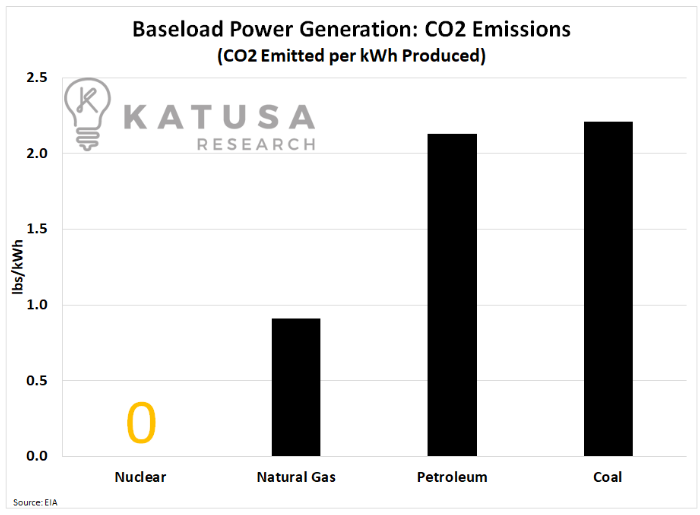 Now many uranium haters will highlight the radioactive toxic waste as an issue, which is true. However, those are the old reactors, which also are the ones that caused meltdowns in Chernobyl and Fukushima.

The new generation reactors as developed by companies like Bill Gates’ TerraPower, X-Energy Ltd, and others are meltdown proof and do not produce radioactive waste. Furthermore, they’re smaller, making them modular and hence faster to construct, with the ability to load-balance. The catch? It still takes a long time to jump through the bureaucratic hoops and to get projects financed.

Uranium has had incredible booms and busts, perhaps more so than any other commodity. Below is the historical price of uranium going back to 1930. As you can see, when it moves, it moves big and fast. 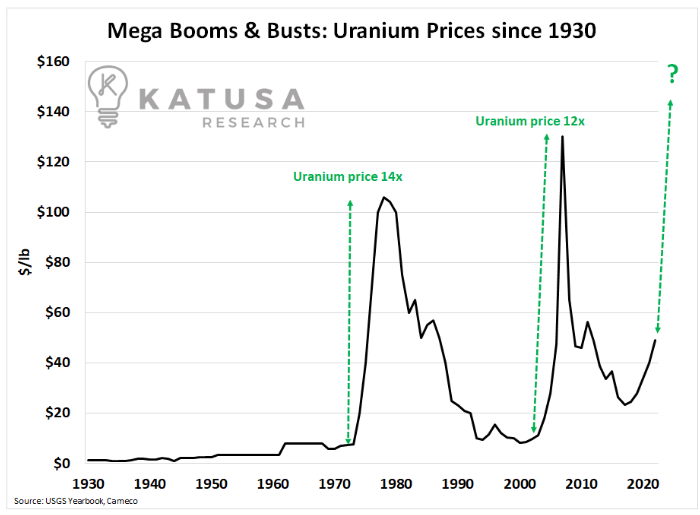 The latest collapse from 2009 through 2020 was sparked by the massive decline in uranium consumption out of Japan after the Fukushima meltdown. In 2011, before the Fukushima disaster, there were 442 reactors in operation. Today, there are 438 in operation with another 56 under construction. Japan currently has 33 reactors in operation. And according to Japanese officials… The initial restart could bring another seven back online within the next 12 months.

Recently, uranium prices have begun to tick back up as spot market inventory began to dry up thanks to buyers like Uranium Trust and Uranium Royalty Corp. This has sent prices up 40% over the past 12 months and nearly 100% since the pandemic. 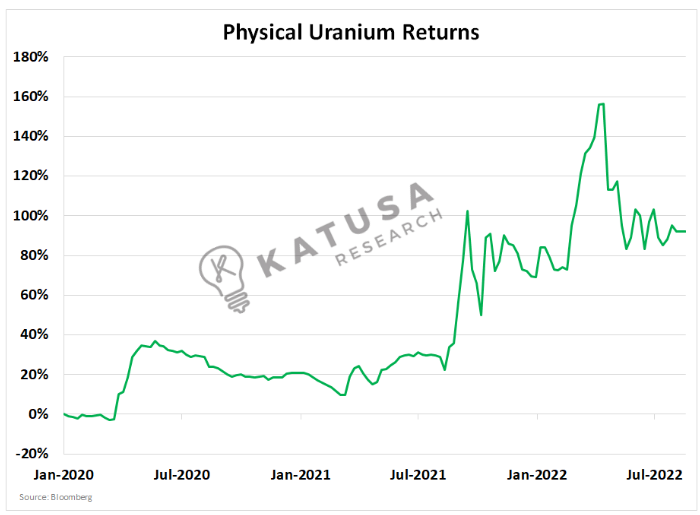 With minimal inventory available for immediate delivery, this opens up the potential for a big squeeze in uranium if the utilities need to source a lot of material quickly. Recall Russia and its Russian allies produce half the uranium consumed worldwide.

Below is a chart that shows the current supply and demand scenario. If this chart is any indication, we could be heading for another spike in uranium prices. 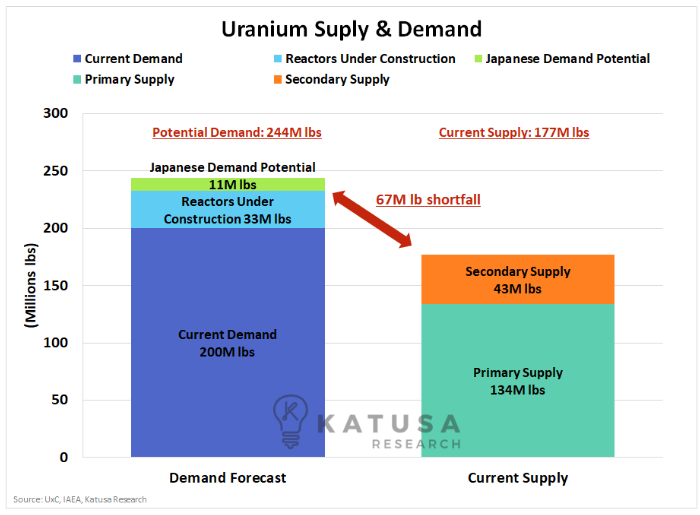 The phasing out of fossil fuels in favor of clean baseload power like uranium, coupled with intermittent renewable energy sources, provides a zero-emission, reliable, and scalable fuel stack. Japan is not alone in its quest for curbing greenhouse gas emissions. This is a worldwide goal and I believe decarbonization represents the single greatest risk-adjusted investment opportunity of my lifetime.

?To find out how I’m positioning myself, and my two major holdings in the uranium sector, click here and become a member of my paid research service, Katusa’s Resource Opportunities.