For now, the market action over the past few weeks shows some signs of near-term fatigue and a defensive stance is warranted until the action improves.

Stocks sold off hard on Friday which sent most of the popular indices lower for the week and erased most of the gains for the month. The small-cap Russell 2000 and the Nasdaq ended the week higher while the S&P 500 and The Dow Jones Industrial Average ended the week lower. The Dow, S&P 500 and Nasdaq all ended in the lower half of their respective weekly range which is not the best sign. 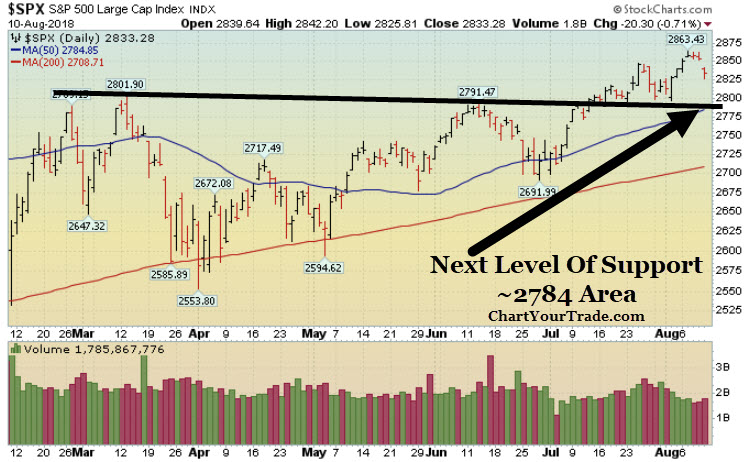 In other news, most, if not all of August’s gains are erased as the sellers are doing their best to regain control. For now, the market action over the past few weeks shows some signs of near-term fatigue and a defensive stance is warranted until the action improves. To be clear, until any major damage shows up, odds favor, this will likely turn into another buyable pullback. But for now, patience is key.

Stocks rallied on Monday after China announced tariffs to retaliate against the White House. Tech stocks led the way higher most of the day as investors showed up and continued buying tech stocks after the recent sell-off. Facebook jumped 3% after the company said it is in talks with large banks to incorporate money into its platform. That big jump helped lift the broader Nasdaq higher.

Stocks rallied nicely on Tuesday as investors continued to shrug off the negative headlines regarding a potential escalation in the so-called trade war with China. In other news, shares of Tesla surged after Elon Musk tweeted he might take the company private. The stock was halted mid-day on the news then denied it was going private. Other tech stocks also rallied helping the Nasdaq led the market higher. Stocks were relatively quiet on Wednesday as the major indices struggled for direction and traded between positive and negative territory for most of the day.

Rumors spread regarding Tesla and all the various theories of way Elon Musk wants to take the company private. The big rumor was that Saudi Arabia was going to make a hostile takeover bid because they want to control the world’s largest solar, and electric car company. Elon was quiet on Wednesday as he tried to prove that he secured funding to take the company private. If not, he could be in hot water with the SEC. Separately, the US imposed economic sanctions on Russia which was not received well.

Stocks were quiet on Thursday as investors are waiting for the next big catalyst to be released. So far, approximately 90% of S&P 500 companies have reported quarterly results and 76% have reported better-than-expected earnings. Additionally, so far, S&P 500 earnings for the second quarter vaulted nearly 25% versus the second quarter of 2017! That is a big feat. Stocks fell on Friday after the Turkish lira imploded and fear spread regarding economic tensions between the US and some of its Asian counterparts, mainly China and Russia.

As always, keep your losses small and never argue with the tape. Want A Bargain? Take A FREE 1-Month Trial To CheapBargainStocks.com and Always Know The Cheapest Stocks In The Market Every Week