US Slowdown or Recession?

Key indicators point to a slowdown and not a full recession. Yet.

This morning, I had a chance to speak with Chun Wang, a portfolio manager who produces great research at the Leuthold Group. Chun just wrote a Macro Monitor comment, Slowdown Or Recession? Confidence Is Key, where he outlines these main points:

While the low inflation, slow growth (but no recession), and low interest-rate environment is likely to continue and provide a favorable backdrop for credit, the market has already priced in three rate cuts for 2019, which seems aggressive and will likely limit the upside for credit going forward. We turned neutral on all credit classes.

I will not go over the entire report, but it’s fair to say Chun’s group was positioned defensively at the end of September of last year and that helped them weather the Q4 storm.

Of all the indicators we’re showing, none is more critical than confidence at this juncture. This could be the difference between a recession and a slowdown. Chart 18 shows consumer confidence typically rolls over from an elevated level before a recession, and the latest tumble is a serious concern. Blame it on the trade war and we could see a rebound shortly… or enjoy the slide on Chart 19!

Chun concludes by stating this:

To sum it all up, we put together a Recession Dashboard with all eleven leading indicators and their current status. Right now, there are five green lights and six yellow lights. That means we are still in the slowdown camp, not the recession camp. Of these indicators, the most vulnerable one is M2 growth, which is perhaps the closest to a red light. Needles that could deteriorate quickly and tip the balance toward recession are the confidence gauges and the stock market, which is basically a measure of investors’ confidence. All of these could drop sharply, in a matter of weeks, from currently-elevated levels. As we said, the next few months will be critical in establishing the path forward; confidence from consumers, businesses, and investors will be the difference between a recession and a slowdown.

Indeed, the next few months will be critical in establishing the path forward which is why all eyes are on the US stock market making record new highs.

If you were only to gauge the future by looking at US stocks, you’d think everything is fine. But Chun is careful stating this on their Risk Aversion Index featured at the top of this post:

Our Risk Aversion Index fell in June but stayed on the “Higher Risk” signal generated in May. All risky assets performed well and so did the safe-haven assets like Treasuries and gold. An imminent Fed rate cut will do this to asset prices. While the low inflation, slow growth (but no recession), and low interest-rate environment is likely to continue and provide a favorable backdrop for credit, the market has already priced in three rate cuts for 2019, which seems aggressive and will likely limit the upside for credit going forward. Therefore, we are turning neutral on all credit classes, including higher-quality investment grade corporate bonds, which we previously viewed as favorable.

Credit markets have been on fire since selling off in late December but I agree, a lot of this move is nothing more than exuberant expectations of Fed rate cuts:

As far as stocks, they too have been on fire since the December selloff and one has to wonder how much juice is left to propel them higher:

Commodity trading advisors (CTAs) are all piling in here as their models typically buy these breakouts but large global macro funds are more cautious.

Bridgewater’s Ray Dalio said there’s a little more than one year left of Fed stimulus, echoing some of the same concerns as PIMCO’s Scott Mather who said that “we have probably the riskiest credit market that we have ever had” in terms of size, duration, quality and lack of liquidity,” adding that the current situation compares to mid-2000s, just before the global financial crisis.

I don’t know but I can tell you these markets don’t make me feel warm and fuzzy on the inside. The financial commentators on television rejoice every time stocks hit another record level, but it can all evaporate very quickly if confidence is shaken.

As far as stock sectors, technology is still leading the way, up 31% year-to-date: 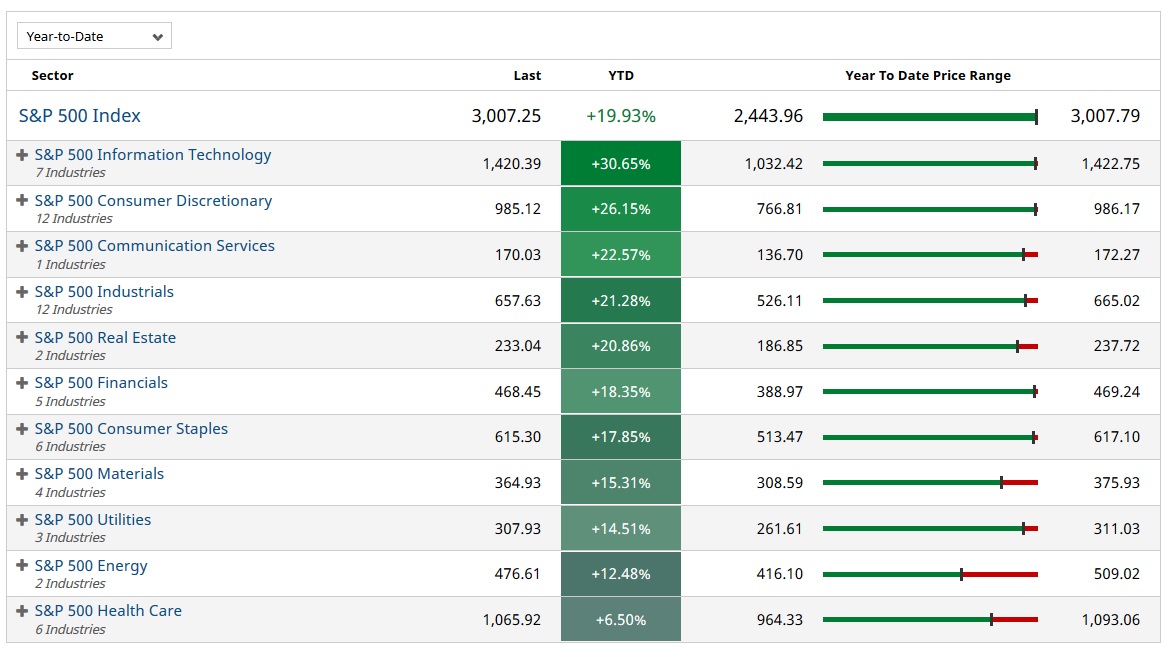 If I told you the S&P is up 20%, tech shares are up over 30% and financials are up 18% this year and the Fed is thinking of cutting rates this late in the cycle, you’d think I’m nuts, and rightfully so.

But a 25 basis points rate cut is already baked in the market which tells me once the Fed cuts, there will be some profit-taking. If the Fed doesn’t cut this month, watch out below, it will be a bloodbath.

Chun told me they’re bullish on tech as it’s a growth story during a slowdown, but they also went overweight financials from underweight last year (they really like insurers here). He told me they’re neutral on healthcare given headline risks with the upcoming elections.

Anyway, I thank Chun Wang for talking to me earlier, I always loved that Green book Steve Leuthold put out and I’m glad they’re continuing that tradition.

Below, Leuthold Group’s Jim Paulsen appeared on CNBC a couple of weeks ago stating: “[there’s] a lot of support for this economy and this market — and a lot of fear and caution. That’s a powerful combination, I think, for higher levels here down the road.” Turns out, he is right, for now.