Buckle Up: Unrelenting Economic Challenges Raise the Stakes for China

Lackluster data coming out of China’s real estate sector shows a further weakening of the nation’s economy. That data emerged as China remains firm in its zero-tolerance policy for Covid — which has led to dozens of lockdowns in cities across the country. The overall picture, almost comprehensively bleak, merits a closer look.

Economic statistics released for July, which include retail sales, industrial output, and fixed asset investment, all slowed — and also missed economists’ estimates by wide margins. This represents the weakest expansion of economic activity in China since the initial Coronavirus outbreak. 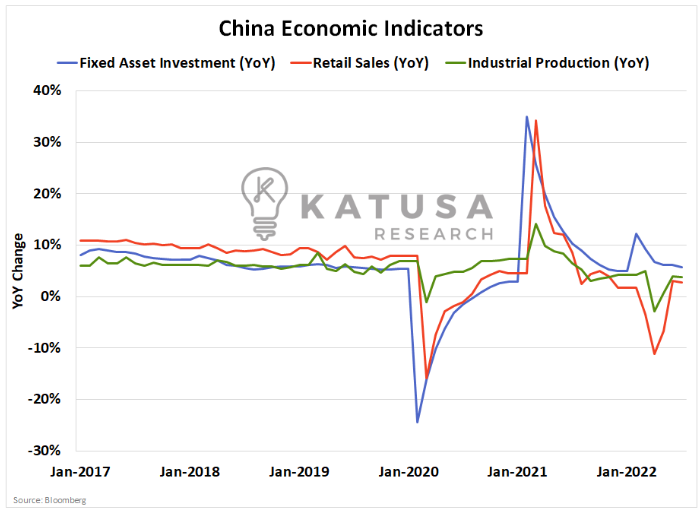 The Tik-Tok employment market is weak. In China, the government tracks a unique data point – the unemployment rate for individuals aged 16-24. This Gen Z demographic is working harder on their smartphones these days, as unemployment for them just surged to a record high of 19.9%. 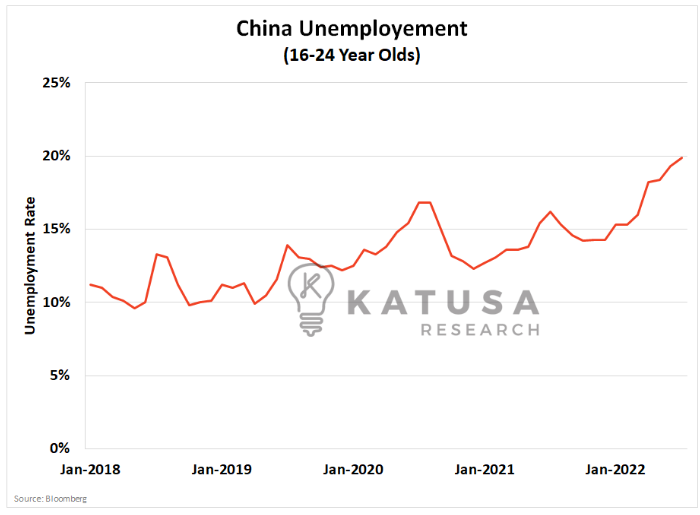 Taking a more broad-brush approach, using survey data from 31 Chinese cities, the overall unemployment rate across all demographics is 5.60% — which might feel low, but it is well above the historical national average. 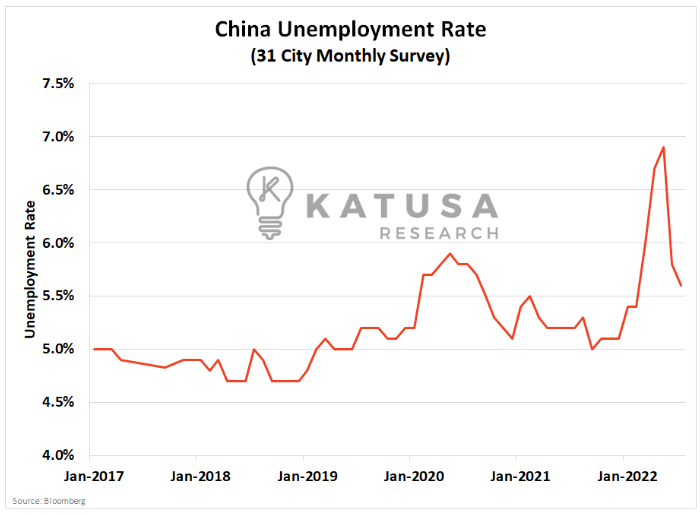 Chinese leadership brass privately acknowledged the country’s annual GDP growth target of 5.5% is not achievable. Mainstream economists are forecasting 4% or lower for this year. China has never missed its GDP target to this degree before. The government didn’t set a target in 2020, during the first wave of the coronavirus outbreak, and only missed it slightly by 0.2 percentage points in 1998. A miss of this nature represents a major black eye for the CCP.

To curb the economic slide, the PBOC (aka the Chinese Central Bank), unexpectedly cut interest rates this week. This goes against the grain of many other nations that have seen their interest rates hiked considerably over the past three months. 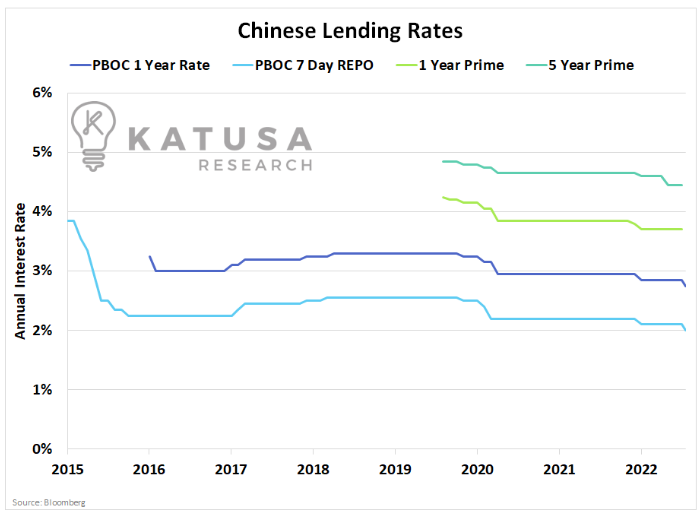 Chinese credit growth shows that monetary policy is pushing on a string. Last Friday’s data showed aggregate financing (a broad measure of credit) was almost half of what economists expected. Bank loan growth slowed to 11%, near the historical low. Below is a chart that shows the 12-month moving average for lending to non-financial corporations and households. Both averages have been trending down hard for months now.

You can always question the reliability of data, and it’s only one data set. But for what it’s worth, using the July data financing and loan issuances are down a lot. Here’s a summary of the destruction:

Re-Shoring China Is Just One Concern

The barrage of trading halts comes at a bad time for the city’s equity market, after the Hang Seng Index slid to a 10-year low last month. Trading in 33 Hong Kong-listed stocks worth a combined $15 billion, was halted last week after firms missed a deadline to report annual results. Troubled Chinese developers including Sunac China Holdings Ltd. and Shimao Group Holdings Ltd. were among the stocks suspended.

The high yield bond market continues its free fall, with an estimated $125 billion loss year to date. Average junk bonds are trading at 56 cents on the dollar. You can see there’s almost no end to the negative data.

But wait, there’s more… The housing slump worsened in July, with sales falling more than 28% on year and prices declining for an 11th consecutive month. This is the worst streak for Chinese real estate since 2014. 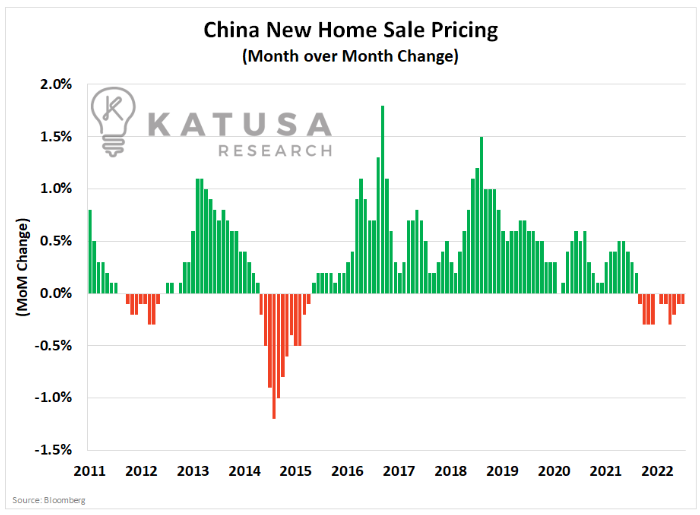 On the heels of price softening, the Chinese real estate developers index continues to plumb levels unseen since 2012. As I wrote in last week’s column, Chinese developers are really hurting, with many facing major credit crunches this year. 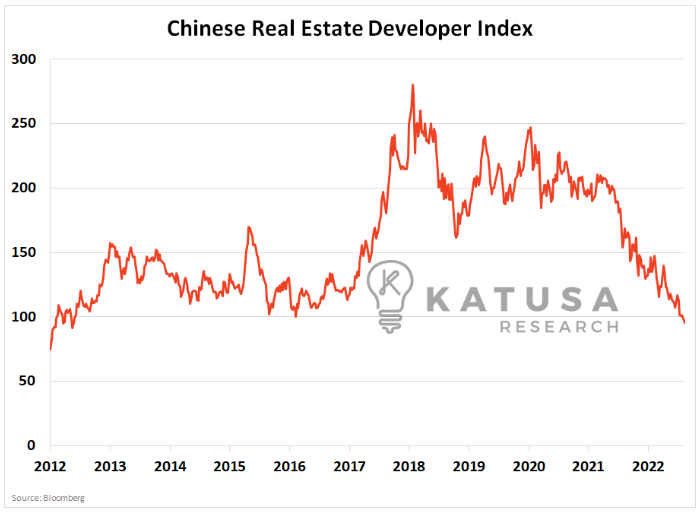 In China, the economic pain can be seen across sectors, with crude steel output dropping around 6% year-on-year last month. Iron Ore demand continues to trend lower and looks to be trending lower since the Covid stimulus spike in late 2020. 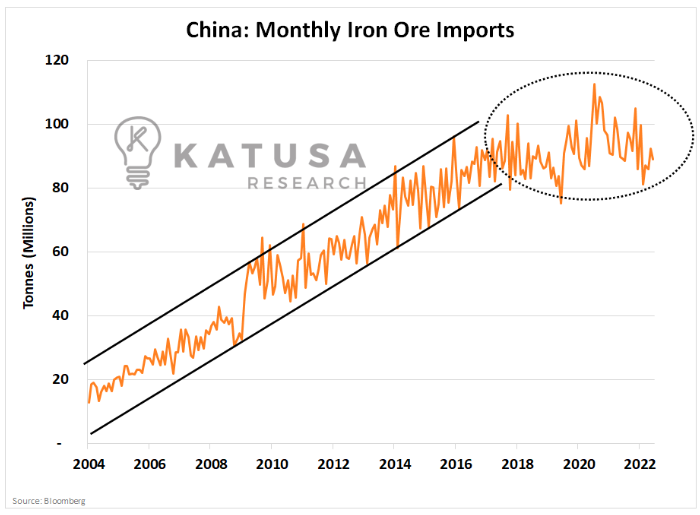 Currency Devaluation on the Horizon

The PBOC will do everything in its power to orchestrate a soft economic landing. An expansive monetary policy, coupled with soft or declining economic growth typically would be faced with a depreciating currency. However, because the Yuan is pegged to the US dollar, this math goes out the window. The big issue for China altering its peg is that buying commodities in the international market becomes more expensive.

Each Yuan buys fewer commodities under a devaluation scenario. Is one possible? Nothing should be ruled out, but it is not my base-case scenario. Macroeconomic risk is something that few investors truly understand or account for in their portfolio construction.

I’ve outlined my entire game plan in real-time to my subscribers including an example of how devaluation works. To see my premium research, consider becoming a subscriber to Katusa’s Resource Opportunities.