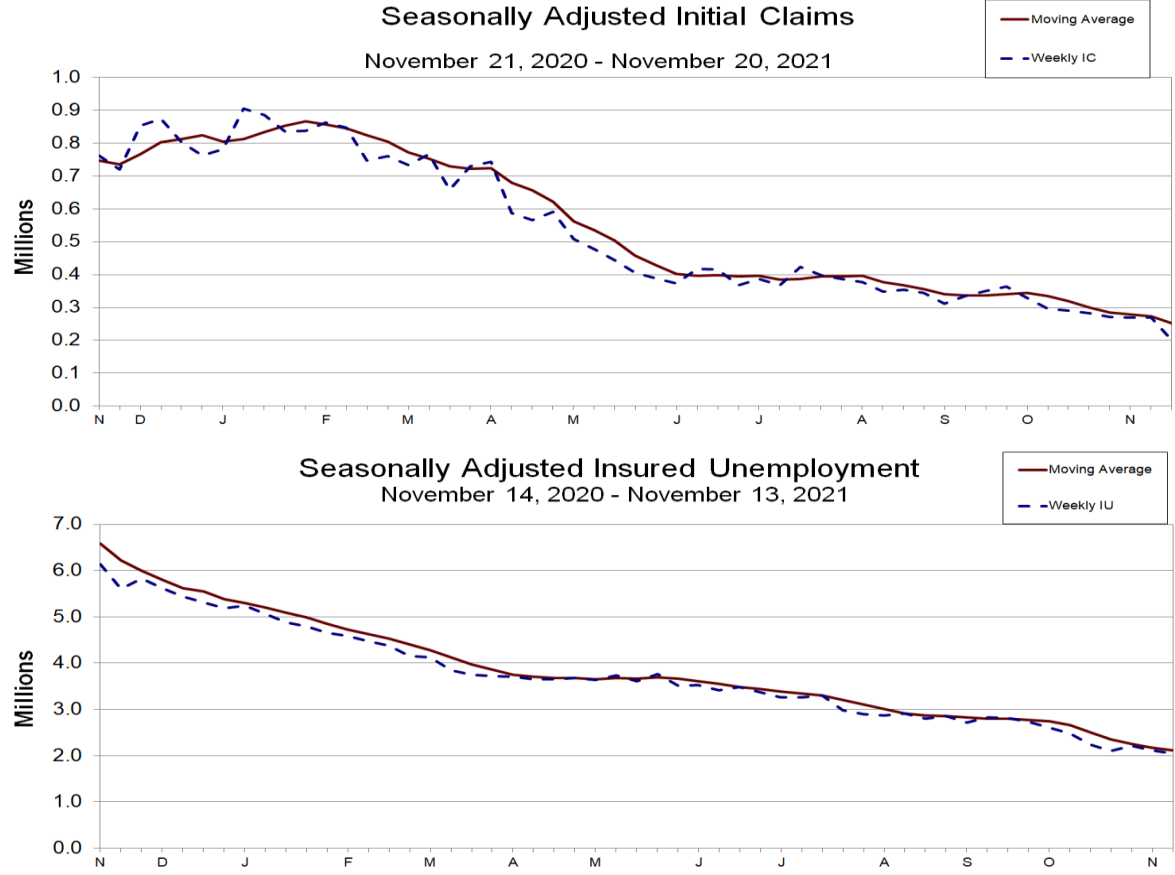 The number of Americans applying for unemployment benefits dropped last week to the lowest level since November 1969, a sign that the US job market is continuing to recover from the COVID-19 pandemic.

In the week ending Nov. 20, filings for initial unemployment benefits fell 71,000 to 199,000, according to data released Wednesday by the Labor Department.

The four-week average of claims declined by 21,000 to just over 252,000 — the lowest level since mid-March 2020, shortly after the onset of the coronavirus crisis.

Following the report’s release, Mark Hamrick, a senior economic analyst at Bankrate, told Yahoo Finance, “It is fair to say that we didn’t see that coming. Getting new claims below the 200,000 level for the first time since the pandemic began is truly significant, portraying further improvement.”

“The strains associated with higher prices, shortages of supplies and available job candidates are weighed against low levels of layoffs, wage gains and a falling unemployment rate,” Hamrick continued. “Growth will likely be above par for the foreseeable future, but within the context of historically high inflation which should relax its grip on the economy to some degree in the year ahead.”

Along with the drop in weekly claims, continuing claims, which run a week behind, fell by 60,000 to 2.05 million, a new pandemic-era low and a strong sign that the labor market is getting notably tighter.

The total of Americans receiving benefits under all programs fell sharply, down by 752,390 to 2.43 million, according to data through Nov. 6.

The Associated Press noted that seasonal adjustments seemed to play some type of role in the better-than-expected report. Unadjusted, claims totaled 258,622 — a 7.6% increase from the prior week.

Other analysts believe the data could be evidence that employers are curbing layoffs and making an effort to retain workers amid the tight job market.

Last month, the economy added 531,000 jobs but is still short around 4 million jobs compared to pre-pandemic levels. According to the latest monthly employment report from the Bureau of Labor Statistics, the US unemployment rate is at 4.6%, down from 4.8%.

President Joe Biden cheered the report, calling it a “historic jobs recovery,” but said there is more work to be done, including driving down consumer prices and addressing rising inflation.

"Last year, there were 21 million unemployment insurance claims before the Thanksgiving holiday," Biden said. "Today, there were 2.4 million."

"More Americans are getting back to work and more Americans have money in their pockets, thanks to the American Rescue Plan and the vaccination campaign,” said Biden, who added that the latest figures “reinforce the historic economic progress we are making and the importance of building on that progress.”