I’m no fan of this trend. But as an investor, I ask, “can we make money from it?”

Thanks to prices rising at their fastest pace in decades, folks are trying anything to save a few bucks.

Some of my friends switched energy providers to get better deals. Others drive to the next town over to get cheaper gas. It’s gotten so bad even the “six-figure club” have turned into penny pinchers…

Americans who earn over $100k are shopping at dollar stores.

It has almost 20,000 stores across 47 states. That’s as many as Target, Walgreens, and Walmart combined. Around 75% of Americans live within five miles of a Dollar General.

Dollar General CEO Todd Vasos said Americans earning six-figure salaries are shopping in Dollar General stores more frequently than ever before. In fact, sales to these “wealthy” Americans are growing at the fastest rate of any customer group.

The same trend is playing out across the world. Grocery prices where I live in Ireland recently hit all-time highs. I started buying the same canned tuna in dollar stores for 50% cheaper than in the supermarket.

Contrast that to big box retailers Target and Walmart, which both lowered sales forecasts for this year.

Dollar General’s stock has also been a top performer over the past year and a half: 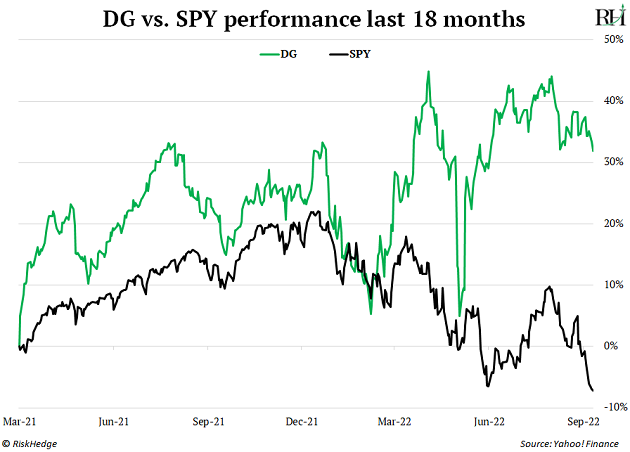 It’s trading around 9% of its all-time highs. That’s incredible, given the S&P 500 is more than 20% off its highs today.

But here’s the most surprising part…

Luxury brands and dollar stores have one thing in common. They’re both having record years.

Bugatti makes luxury sports cars. Its new Mistral roadster will set you back $5 million. It’s already sold every car that will hit showrooms for the next three years.

Dollar stores and designer brands are both raking in record amounts of cash. This epitomizes how the Great Divide in America today just keeps getting wider.

Millions struggle to make ends meet while “the haves” splurge on luxury goods. It’s a hollowing out of the middle class.

I’m no fan of this trend. But as an investor, I ask, “can we make money from it?”

The best way to secure your spot among the “haves” is to invest in great businesses with the wind at their back. You could do that now by betting on DG and LVMUY.

Dollar General is on track for a record year and is opening thousands of new stores. And LVMH is achieving record revenues and is one of my top stocks to own for the next five years.

Middle-of-the-road retailers are getting crushed…

And their stocks have been in a downward spiral for years. 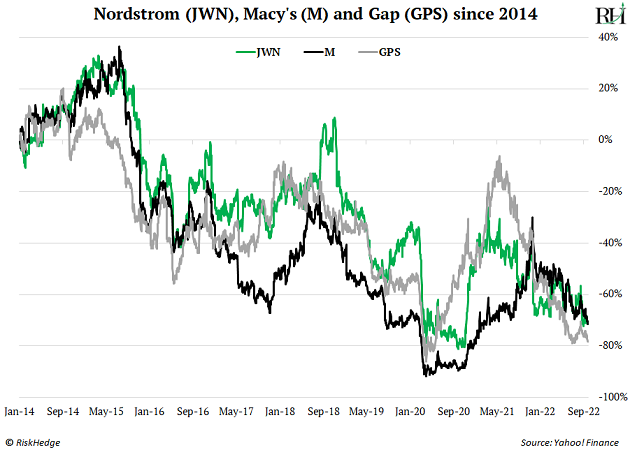 They tried to be everything to everyone.

The “department store” business model used to work. Open a big store, and sell everything from blouses to outdoor grills to video games. As long as the store was located in a place with enough foot traffic—like a city or a shopping mall—it could do good business.

Those days are long gone. Internet shopping has blown up unspecialized, “middle of the road” stores. Mark my words: within the next decade, most department stores will go bust.

Steer clear of these “middle of the road” retailer stocks like JWN, M, and GPS. Instead, bet on the names at opposite ends of the Great Divide, such as DG and LVMUY.

What “middle of the road” companies will be disrupted next? Tell me your thoughts at stephen@riskhedge.com.

3 Breakthrough Stocks Set to Double Your Money in 2022: Get our latest report where we reveal our three favorite stocks that can hand you 100% gains as they disrupt whole industries. Get your free copy here.