Getting nowhere in the courts, Trump's scattershot effort to overturn President-Elect Joe Biden's victory is shifting toward obscure election boards that certify the vote. 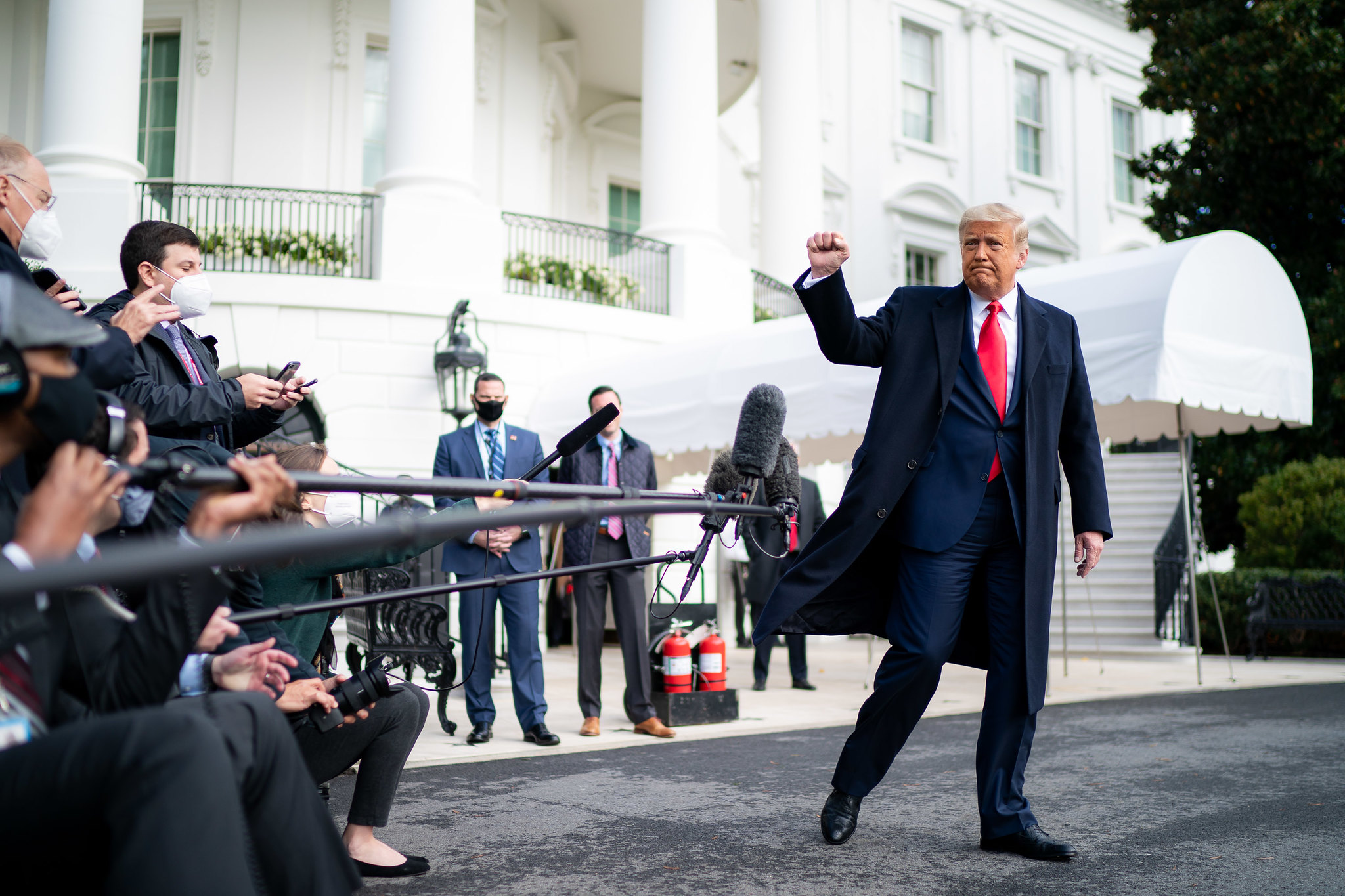 By Zeke Miller, Christina A. Cassidy and Colleen Long

WASHINGTON (AP) — Getting nowhere in the courts, President Donald Trump’s scattershot effort to overturn President-elect Joe Biden’s victory is shifting toward obscure election boards that certify the vote as Trump and his allies seek to upend the electoral process, sow chaos and perpetuate unsubstantiated doubts about the count.

The battle is centered in the battleground states that sealed Biden’s win.

In Michigan, two Republican election officials in the state’s largest county initially refused to certify results despite no evidence of fraud. In Arizona, officials are balking at signing off on vote tallies in a rural county.

The moves don’t reflect a coordinated effort across the battleground states that broke for Biden, local election officials said. Instead, they seem to be inspired by Trump’s incendiary rhetoric about baseless fraud and driven by Republican acquiescence to broadsides against the nation’s electoral system as state and federal courts push aside legal challenges filed by Trump and his allies.

Still, what happened in Wayne County, Michigan, on Tuesday was a jarring reminder of the disruptions that can still be caused as the nation works through the process of affirming the outcome of the Nov. 3 election.

There is no precedent for the Trump team’s widespread effort to delay or undermine certification, according to University of Kentucky law professor Joshua Douglas.

“It would be the end of democracy as we know it,” Douglas said. “This is just not a thing that can happen.”

Certifying results is a routine yet important step after local election officials have tallied votes, reviewed procedures, checked to ensure votes were counted correctly and investigated discrepancies. Typically, this certification is done by a local board of elections and then, later, the results are certified at the state level.

But as Trump has refused to concede to Biden and continues to spread false claims of victory, this mundane process is taking on new significance.

Among key battleground states, counties in Michigan, Nevada and Wisconsin have all made it through the initial step of certifying results. Except for Wayne County, this process has largely been smooth. Arizona, Pennsylvania and Georgia still haven’t concluded their local certifications.

Then all eyes turn to statewide certification.

In Wayne County, the two Republican canvassers at first balked at certifying the vote, winning praise from Trump, and then reversed course after widespread condemnation. A person familiar with the matter said Trump reached out to the canvassers, Monica Palmer and William Hartmann, on Tuesday evening after the revised vote to express gratitude for their support.

Time is running short for Trump. Across the nation, recounts and court challenges must wrap up and election results must be certified by Dec. 8. That’s the constitutional deadline ahead of the Electoral College meeting the following week.

Matt Morgan, the Trump campaign’s general counsel, said last week the campaign was trying to halt certification in battleground states until it could get a better handle on vote tallies and whether it would have the right to automatic recounts. Right now, Trump is requesting a recount in Wisconsin in two counties, and Georgia is doing an hand audit after Biden led by a slim margin of 0.3 percentage points, but there is no mandatory recount law in the state. The law provides that option to a trailing candidate if the margin is less than 0.5 percentage points.

Some in the president’s orbit have held out hope that by delaying certification, GOP-controlled state legislatures will get a chance to select different electors, either overturning Biden’s victory or sending it to the House, where Trump would almost surely win.

But most advisers to the president consider that a fever dream. Trump’s team has been incapable of organizing even basic legal activities since the election, let alone the widescale political and legal apparatus needed to persuade state legislators to try to undermine the will of their states’ voters.

Lawsuits have been filed by Trump allies in Michigan and Nevada seeking to stop certification. Trump personal attorney Rudy Giuliani argued to stop vote certification in Pennsylvania on Tuesday, the first time he’d been in a courtroom in decades. And the same day, the Arizona Republican Party asked a judge to bar Maricopa County, the state’s most populous, from certifying until the court issues a decision about the party’s lawsuit seeking a new hand count of a sampling of ballots.

The party is also putting pressure on county officials across the state to delay certification, even though there hasn’t been any evidence of legitimate questions about the vote tally showing that Biden won Arizona.

“The party is pushing for not only the county supervisors but everyone responsible for certifying and canvassing the election to make sure that all questions are answered so that voters will have confidence in the results of the election,” said Zach Henry, spokesman for the Arizona Republican Party.

While most counties in Arizona are pressing ahead with certification, officials in Mohave County decided to delay until Nov. 23, citing what they said was uncertainty about the fate of election challenges across the country.

“There are lawsuits all over the place on everything, and that’s part of the reason why I’m in no big hurry to canvass the election,” Mohave County Supervisor Ron Gould said Monday.

Officials in all of Georgia’s 159 counties were supposed to have certified their results by last Friday. But a few have yet to certify as the state works through a hand tally of some 5 million votes.

“They are overwhelmed, and they are trying to get to everything,” said Gabriel Sterling, a top official with the Georgia Secretary of State’s Office. “Some of these are smaller, less resourced counties, and there are only so many people who can do so many things.”

In addition, a few counties must recertify their results after previously uncounted votes were discovered during the audit.

Once counties have certified, the focus turns to officials at the state level who are charged with signing off on the election. This varies by state. For instance, a bipartisan panel in Michigan certifies elections, but in Georgia it’s the responsibility of the elected secretary of state, who has already faced calls by fellow Republicans to resign.

In Nevada, Secretary of State Barbara Cegavske’s role in certification is largely ministerial, but she still got a batch of emails urging her not to certify “potentially fraudulent election results,” a spokeswoman said Wednesday. The Justice Department had been looking into one potential case of fraud in the state over voter rolls, but an AP analysis found the case doesn’t appear to hold much water.

In Pennsylvania’s Luzerne County, a Republican board member, Joyce Dombroski-Gebhardt, said she will not certify the county’s election without an audit of at least 10% of the votes to ensure that some voters did not vote twice.

Trump won the county, where the election board is made up of three Democrats and two Republicans. A Democrat on the board, Peter Oullette, said he had no doubt that the rest of the board will sign the certification on Monday.

Philadelphia also had plans to certify results on Monday.

And some delays could still happen given the crushing workload election officials faced this year during the pandemic, according to Suzanne Almeida with Common Cause Pennsylvania, a good government group that helps with voter education and monitors election work in the state.

“A delay in certification doesn’t necessarily mean there are shenanigans; sometimes it just takes longer to go through all the mechanics to get to certification,” Almeida said.