The Trump administration enacted steel and aluminum tariffs against a majority of the countries in the world, including Mexico, Canada, Japan, China and the European Union.

Today the Trump administration enacted steel and aluminum tariffs against a majority of the countries in the world including Mexico, Canada, Japan, China and the European Union. The 10% tariff on aluminum and 25% tariff on steel becomes effective at midnight on June 1, 2018. The global trade war has begun.

There had been much debate by the pundits and analysts about President Trump not being serious about enacting tariffs and instead threatening to invoke them as a negotiating tactic. The market now will have to fully discount President Trump’s decision.

Shortly after the announcement the European Union retaliated by announcing that they were increasing the duties for $3.1 billion of goods that are exported into Europe by Harley Davidson, Levi Strauss and US distillers of bourbon whiskey. Canada imposed $16.6 billion of dollar for dollar 10% and 25% tariffs for US goods which are being exported to Canada by US companies.

With the trade war now commencing at full speed ahead the fate for the 2009-2018 secular bull market has been sealed. The funeral for the nine-year old bull will soon be held. My February 6, 2018 article “BULL DEAD, BEAR DOB 01/31/18: Expect Stock Market Decline of at Least 50%”) about the new bear market being born on January 31, 2018 is highly recommended.

Tariffs did not work very well for President Bush’s steel tariffs. The market declined by 28.7% by the first anniversary that the steel tariffs had been in effect. 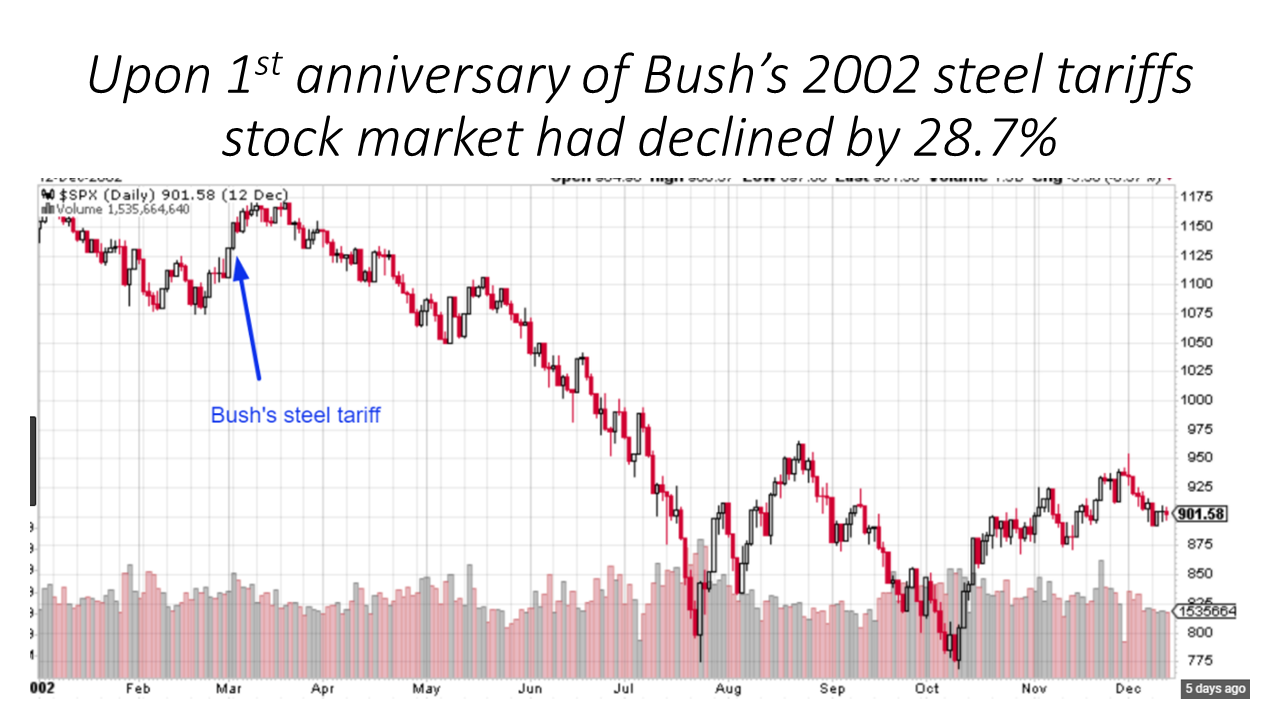 The charts below depict that tariffs negatively impact the market because they contract PE multiples. The tariffs work in reverse of expanding free trade and PE multiples when communism fell in 1990. 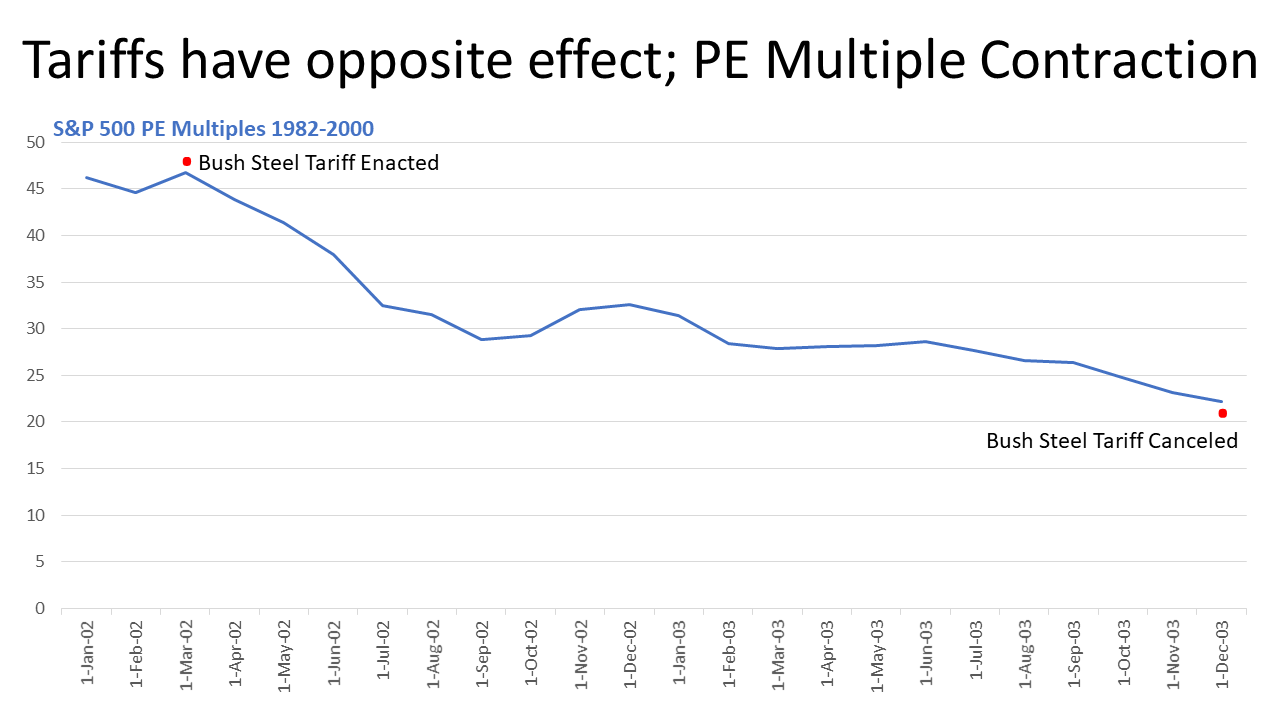 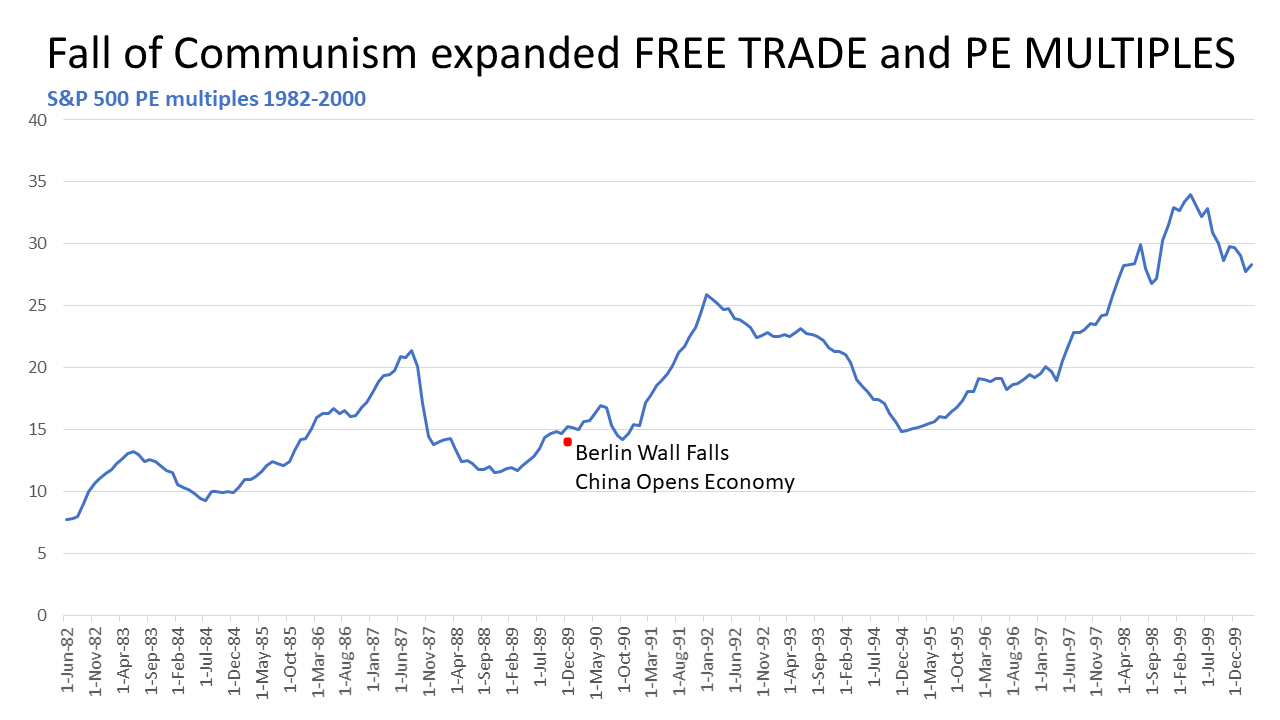 My 3:55 minute video interview about the negative impact that the tariffs will have on the markets is recommended.

The video below entitled “How a Tariff enacted in 1930 caused the crash of 1929” is a must view. There is additional information about tariffs and how they negatively impact economies and markets at www.profitfromthecrash.com.

All of my alerts and updates about secular bear market which is has been underway are available for FREE at www.profitfromthecrash.com.

For those investors who do not want to take minimal risk and yet have the potential for their portfolios to grow I am recommending the deployment of a 90/10 Crash Protection Strategy. For information on the strategy which is the only fail-safe strategy that one can utilize to protect their liquid assets from crashes, recessions and depressions view video below entitled “Profit From the Crash”.

Disclaimer. Mr. Markowski’s predictions are frequently ahead of the curve. The September 2007 predictions that appeared in his EquitiesMagazine.com column stated that share-price collapses of the five major brokers, including Lehman and Bear Stearns, were imminent. While accurate, they proved to be premature. For this reason he had to advise readers to get out a second time in his January 2008 column entitled “Brokerages and the Sub-Prime Crash”. His third and final warning to get out, and stay out, occurred in October of 2008 after Lehman had filed for bankruptcy.In that article “The Carnage for Financials Isn’t Over” he reiterated that share prices for Goldman and Morgan Stanley were too high. By the end of November 2008, the share prices of both had fallen by an additional 60% and 70%, respectively — new all-time lows.