A number of critical events are about to coincide…Here's a closer look at them.

Last week my British friend Jim Mellon sent me a fascinating article with an alarming title: “News from Euroland—Recession Imminent.”

Now, I am not one who falls prey to click-bait headlines (nor is Jim). And I’m also well aware that Europe’s economy is weakening. I would not have said recession was imminent but reading this article left me more than a little concerned.

The author, economist Victor Hill, ties events together in ways many haven’t considered.

Hill begins the piece this way.

Across Europe, and particularly in the 18-member Eurozone, the economic news is sobering. It’s now clear that the credit crunch in emerging markets which has played out over most of this year, plus the slowdown in China, are having negative consequences in Europe. Yet, despite the ongoing trauma of Brexit, the UK is cruising along relatively smoothly—for now.

A number of critical events are about to coincide…

Let’s look at them…

The first such event is the impending end of the European Central Bank’s quantitative easing “Asset Purchasing Programme.” The ECB has been buying bonds, stocks, and anything else that isn’t nailed down wholesale. Asset prices, in turn, have gone up.

Mario Draghi and his crew borrowed our Federal Reserve’s plan and made it even crazier. You can see in the chart they have been stepping down purchases. The pace should reach zero in early 2019. 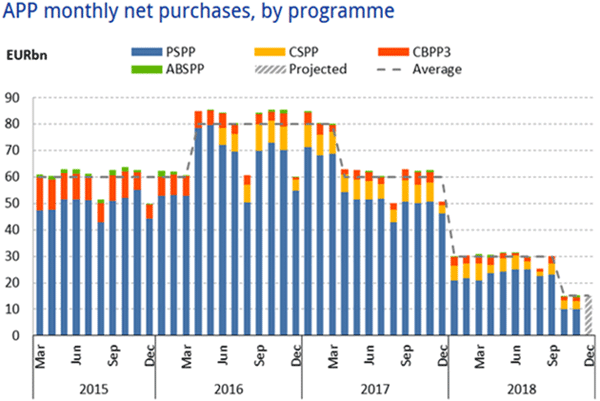 This means the Eurozone will soon lose a monetary drug on which it has grown highly dependent.

But those 18 nations will not be the only ones affected. The larger EU needs a thriving core to stimulate growth for the whole continent.

Hard Brexit, Which Is Very Real

As of now its prospects look dim, at least without changes that the EU side says it won’t accept. That may not be true. As we have learned, European officials are masters at vowing inflexibility and then bending when forced.

Regardless, it is highly uncertain what happens next.

The UK gave formal notice it would leave the EU on March 29, 2019, whether terms of separation are reached by then or not. A “hard Brexit” would be chaotic, to say the least, as it would leave businesses trying to operate in a legal vacuum.

World Trade Organization rules might serve as a backstop in some matters but the massive trade volume between the UK and EU would certainly slow. Can they walk that notice back? Fudge a little bit on the date? This is the EU. They can do anything they bloody well like. Damn the rules and full speed ahead…

On the other hand, remaining in the EU would enrage the millions who voted to leave and probably bring down the May government. Where it would go from there is anyone’s guess.

It is hard to even imagine “democratic socialist” Jeremy Corbin as Prime Minister. So both economies are probably in for a shock unless some miracle produces orderly separation terms in the next three months, which seems unlikely.

Now banks in Italy are having trouble refinancing their bond issues. That is forcing them to curtail lending to an already-weak private sector. Rising mortgage rates are cutting into consumer spending.

Italy is arguably already in recession but the situation looks likely to get worse. And that is a big problem for its creditors, mainly Germany.

But Hill notes, I think correctly, that the Italian crisis is no longer just economic, if it ever “just” was. It is a culture war that is pitting anti-immigration populist movements against “elites” they believe are hostile to their interests.

As happened elsewhere, unemployed and working-class people are losing faith in the system. We’ve seen this most recently in the violent gas-tax protests in France.

This protest movement has an altogether different feel when you pay close attention. It is not just about higher fuel taxes. It is about almost half the country being angry at the educated, city-dwelling elite—all while the brunt of increased taxes falls on an increasingly burdened rural middle class. 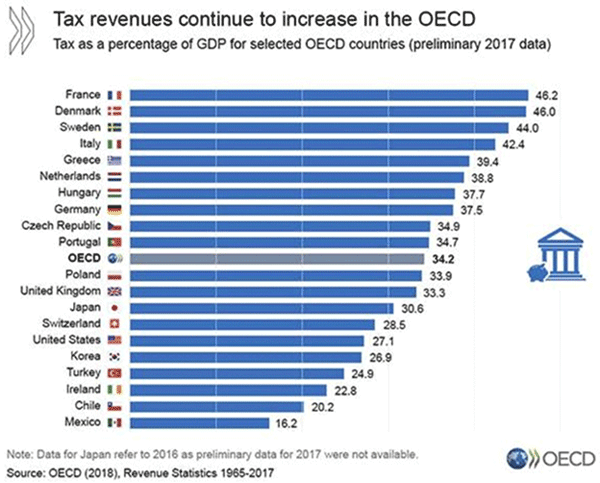 Even a slight tax increase affects the working class disproportionately. And when it increases taxes on something like diesel fuel, which is critical in rural areas, it is particularly hard.

Breaking Point Is Near

In Europe and around the world, we see this pushback against what is seen as an elite group at the top (the “Protected”). They pay no attention to the problems of the less successful “Unprotected” class. And this class is demanding attention.

This “morality play” is spreading through Europe. We now see German political patriarch Wolfgang Schauble backing a candidate to replace Merkel as head of the CDU (Christian Democratic Union).

He is openly courting the same voters that have left their party and gone to the anti-immigration and populist Alternative for Germany (AfD). That means a conservative push for Germany and a more populist approach for mainstream parties.

The common thread running through these events is the idea of a united Europe. This idea was a driving force in the foundation of the European Union. It’s also common in the establishment and/or “elite.”

Up until a few years ago, the idea was popular across the political spectrum but support has weakened as economic times changed. It was never particularly feasible, but the effort made sense for a continent so damaged by centuries of repeated wars.

The problem is that the EU can’t achieve its goals unless it gets stronger, and much of the public has had its fill of centralization. I don’t know how they can solve this. Brexit, if it happens, may turn out to have been the test case for a full dissolution.

How that will unfold is hard to predict. For now, there are more immediate problems. Victor Hill thinks “a disorderly Brexit will be the spark that sets the Eurozone tinderbox aflame in the first half of 2019.”

The tinderbox is already full in Italy and France. It won’t take much heat for that kettle to boil over.