The Mexico Fund is a closed-end fund designed with the investment objective of providing long-term capital appreciation through strategic portfolio allocations. Incorporated in June 1981, and domiciled in the U.S., has always been managed by Impulsora del Fondo Mexico S.C. . The fund offers well-positioned access to Mexico’s economy through a broad range of public listed companies.

Since MXF mainly offers exposure to equities securities listed on the Mexican Stock Exchange, the economy of Mexico has a substantial impact on the fund. However, several of these companies now earn a significant portion of its income and profits abroad, through exports and subsidiaries in other countries or regions. Broadly speaking, the macro trends look highly encouraging.

Political uncertainty due to Presidential elections held on July 1st 2018, and the significant volatility seen in the global stock exchanges earlier this year had a visible impact on the share prices of MXF. Share prices reached its yearly low on June, however, the stock has posted a sharp bullish reversal, and this suggests that a long-term bottom is likely in place for the stock. 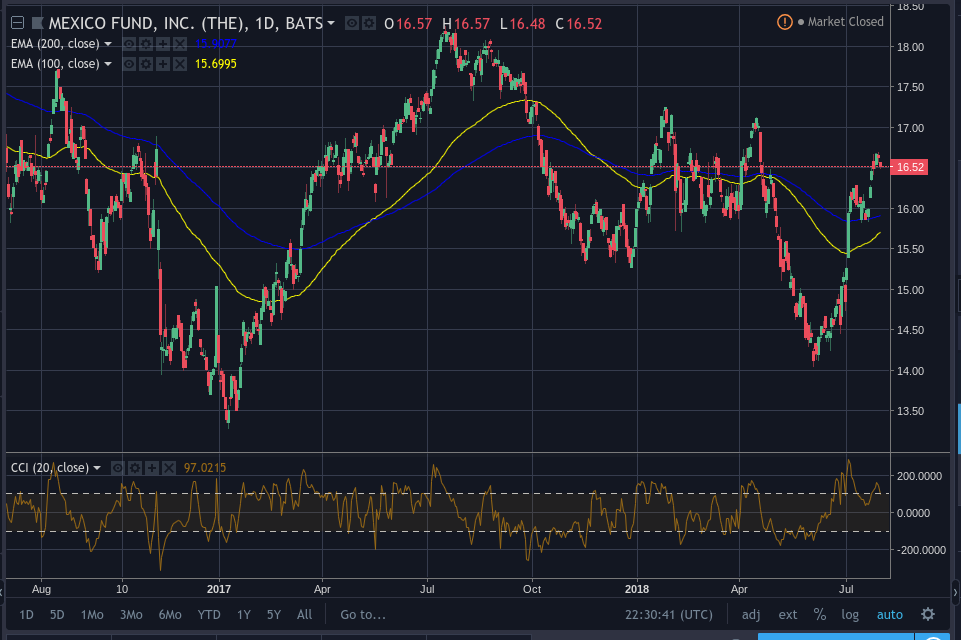 The prior negative trends in the stock price can be attributed to strong movements in the global environment. Some of the major events that have impacting the MXF fund during this period:

Macro trends over the last few years have not been favorable for regional assets. But these declines have created significant opportunities for investors. When viewing the closed-end fund through the lens of its discount to net asset value (NAV), we can see that the Mexico Fund is now trading at some of the deepest discounts in its recent history. 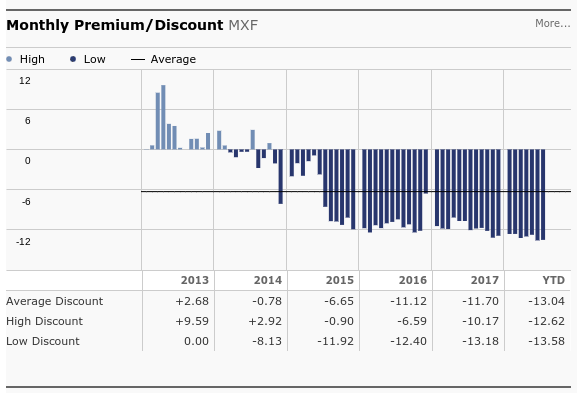 During the first seven months of 2018, the Mexico Fund has had a productive year, with a positive NAV total return of 8.78%, while outperformed its benchmark (the MSCI Mexico Index) by 250 basis points. As of July 31, 2018, the fund’s market price was $16.63 and its NAV per share was $19.23. The Fund has outperformed its benchmark during the last one, three, five and ten year periods ended on July 31, 2018.

During the May-June period this year, the broader market experienced the broader ramifications of the ongoing trade-war tussle between the U.S. and China. The Mexico Fund saw a nice rebound following this period, however, and the stock correction generated gains of 13% through mid-July. This creates a more positive outlook for the remainder of 2018, as trade war fears have subsided, global trade exchanges have resumed their previous rallies and an improved political environment.

Changes in fund holdings in the first half of 2018 have created additional positives, as exposure in the domestic consumption sector was reduced in favor of increases in exposure to the financial services sector. Widespread gains have been seen in financial stocks over the last year, and this puts the Mexico Fund in a much better to capitalize on those trends going forward. 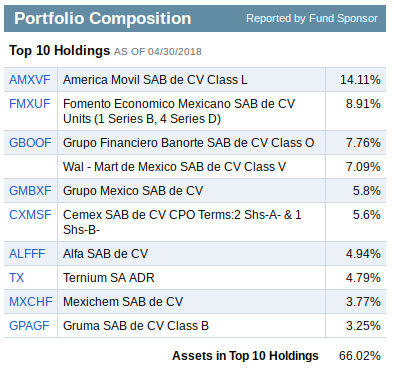 The rising cost of raw materials and high relative valuations have impacted the profitability of companies in the domestic consumption sector, while the financial services sector is still showing higher projected margins. All together, this bodes well for the outlook and sets the Mexico Fund on a course to close its NAV discount heading into next year.