Former Fed Chair Ben Bernanke said the economy could be running off a cliff by 2020.

The U.S. economy is heating up as the year progresses, with the second quarter pointing towards some of the gaudy growth that President Donald Trump predicted when he was running for president.

While running for office, Trump promised his policies would push the economy towards growth he estimated as high as 6 percent.

The Atlanta district raised its forecast following a report Friday morning indicating a stronger than expected inventory build that raised the forecast one-tenth of a point.

Other trackers indicate stronger growth as well, though the central bank’s tracker is the most optimistic.

CNBC’s reliable Rapid Update, which looks at readings from top economists, sees the second quarter coming in at a healthy 3.7 percent. The New York Fed’s Nowcast is tracking a more muted 3.1 percent gain.

The buoyancy comes amid an economy operating close to full employment, with an unemployment rate 3.8 percent, inflation still hovering at or below 2 percent and business and consumer confidence strong.

The Federal Reserve is watching growth closely, and is likely to increase interest rates next week at its two-day policy meeting.

“Right now, there’s no question: It’s feeling strong. I mean, if we’re in the sixth inning, we have our sluggers coming to bat right now,” Buffett told CNBC, adding that “right now, business is good. There’s no question about it.”

“The way I look at it, there is nothing that is a real pothole,” Dimon added. “If you look at how the table’s set, consumers are in very good shape.”

In his latest economic comment, US Economy: Pedal to the Metal, Ed Yardeni cites the Atlanta Fed data to support his point that real GDP may be starting to grow at a faster speed now, exceeding the so-called 2% “stall speed,” which was the so-called “New Normal” from mid-2010 through Q1-2018.

I will let you read Dr. Ed’s comment here, he’s bullish on the economy and on the stock market.

But all this bullishness is making me nervous. Last week, I discussed America’s unstoppable economy but tempered my enthusiasm going forward:

It’s very hard when things are going so well for people to sit back and worry about what could go wrong.

Nevertheless, this is the time when professional asset and risk allocators worry the most because in the back of their mind, it’s as good as it gets and there are a lot of things that can blow up and wreak havoc on their portfolios.

But let’s say nothing “blows up” in Europe, emerging markets and there are no black swans that spell the end of days for stocks. Let’s even say the market is underestimating great earnings and sell in May and go away is a bunch of baloney.

I’ll even go further, let’s say we finish 2018 with a positive not negative “bang” and continue soaring in 2019, what then?

Well, I’m not so confident the second half of the year will be a lot better than the first half but even if I’m wrong, I’m also on record stating the longer this bull market goes higher and the longer we go without a recession, the worst it will be when the downturn hits, both in terms of magnitude and duration.

I recently warned my readers that there is a looming wave of junk bond defaults headed our way. Admittedly, it’s laughable to discuss defaults when the US economy is roaring like this but one distressed debt titan expert is already warning of a flood of troubled credits topping $1 trillion as rising interest rates overwhelm low-quality loans and bonds.

Even more worrisome, the longer-term effects of America’s protectionist trade policies. A full-blown trade war will wreak havoc in Canada and the rest of the world, cause a lot more distress outside the US than within the US, but it will hurt American corporations’ bottom line and will undoubtedly cause unemployment to rise there too.

By the way, it’s critically important to remind all of you that employment is a coincident, not leading economic indicator and inflation is a lagging indicator. One of my astute blog readers sent me Kessler’s latest comment on the last time US unemployment hit 3.8%:

The US unemployment rate, released today, is 3.8%. This rate ties the lowest rate observed over the last 48 years! There was one print of 3.8% in April of 2000 and today’s. No number has been lower since late 1969. 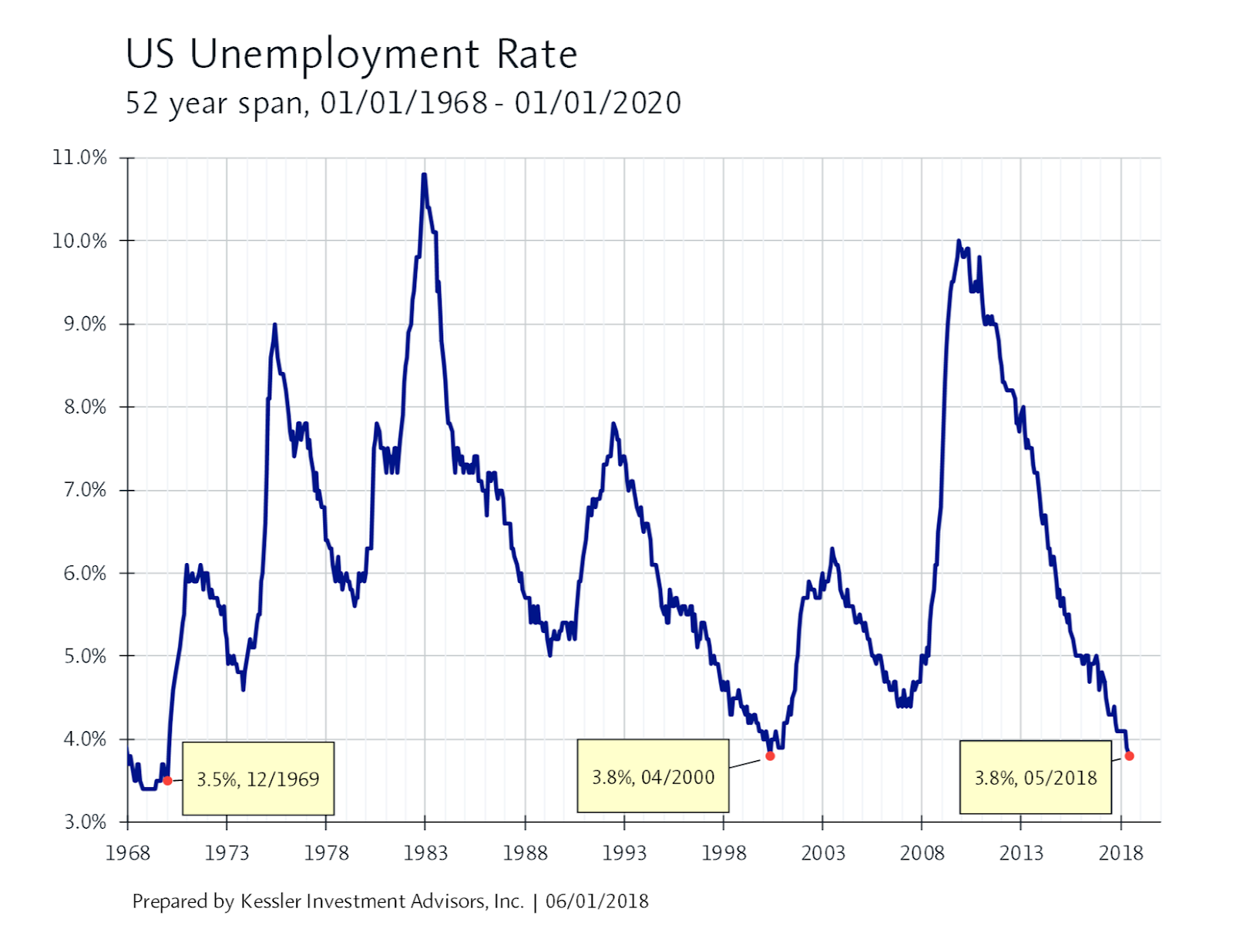 Intuitively, this is good economic news as very few people in the labor force are wanting of a job, but empirically, the last time unemployment was this low was directly ahead of the end of the then 10yr-long economic expansion. As we have previously shown here, low unemployment numbers are a late-cycle indicator.

It is interesting to examine the time surrounding the last time we saw a 3.8% unemployment number; here is what happened. The 10yr US Treasury rose by 10.5 basis points in the two trading days after the number’s release, but amazingly, that high yield print of 6.57% on 5/8/2000 has never since been seen; rates have only been lower since. Two weeks after this number was released, the Federal Reserve raised rates for the last time in that cycle, from 6% to 6.5% 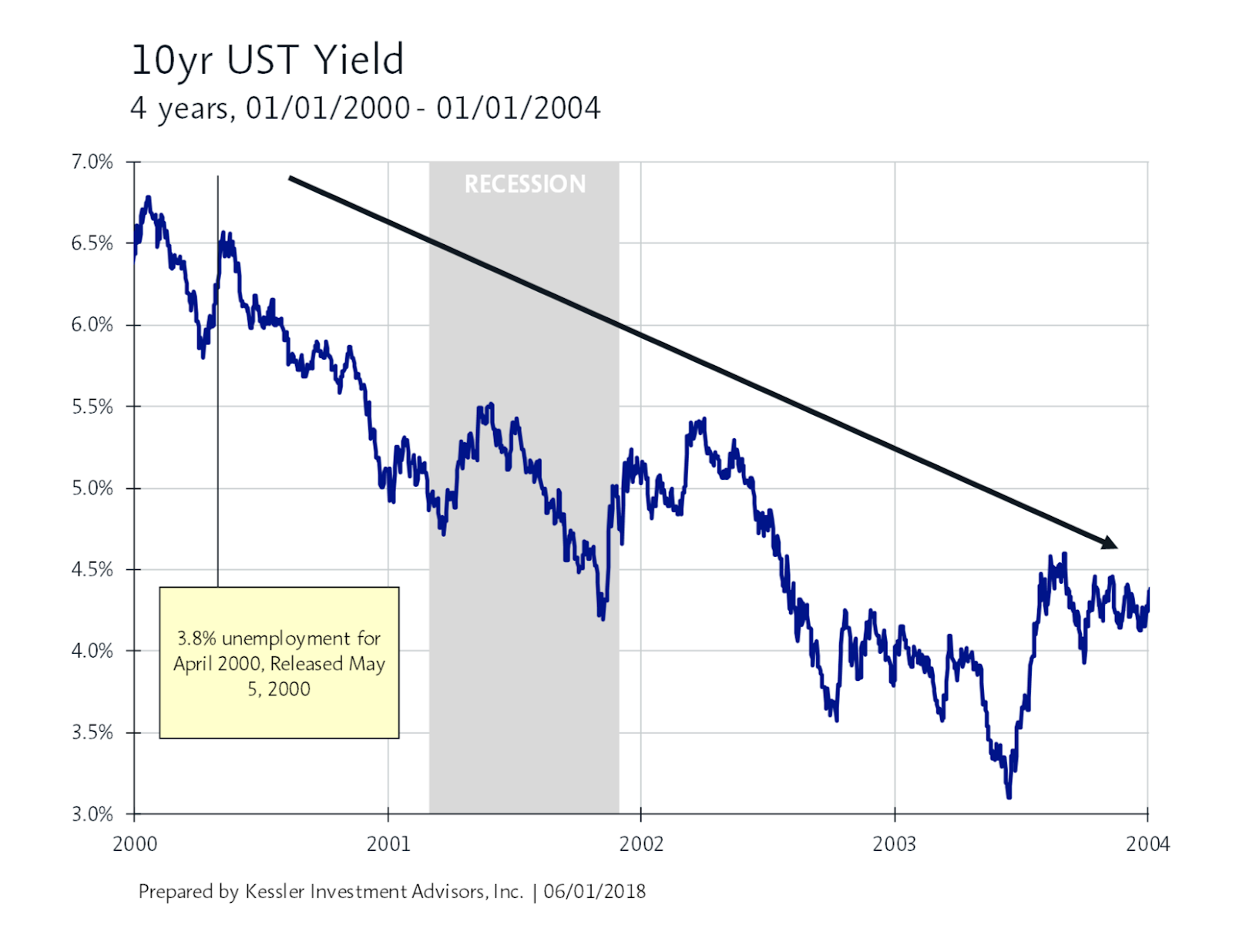 With a comparison this specific, it is dangerous to expect the same outcomes in the same amount of time, but if one is looking for another sign to indicate the end of the stock bull market and the beginning of the US Treasury bull market, this is a good one.

When I tell you to hedge your portfolio using US long bonds (TLT), I’m thinking of nasty surprises out of Europe or elsewhere but I’m also thinking about the coming economic slowdown which is very bond friendly.

Yesterday, I discussed whether global macro gods are staging a comeback and ended by stating Bridgewater is bearish on all financial assets (according to Zero Hedge) and the world’s largest hedge fund thinks 2019 will prove to be a very difficult year.

But on Thursday, Bloomberg’s Craig Torres reported that former Fed Chairman Ben Bernanke thinks the US Economy could face a ‘Wile E.Coyote moment’ in 2020:

Bernanke said the $1.5 trillion in personal and corporate tax cuts and a $300 billion increase in federal spending signed by President Donald Trump “makes the Fed’s job more difficult all around” because it’s coming at a time of very low U.S. unemployment.

“What you are getting is a stimulus at the very wrong moment,” Bernanke said Thursday during a policy discussion at the American Enterprise Institute, a Washington think tank. “The economy is already at full employment.”

The stimulus “is going to hit the economy in a big way this year and next year, and then in 2020 Wile E. Coyote is going to go off the cliff,” Bernanke said, referring to the hapless character in the Road Runner cartoon series.

The timing of Bernanke’s possible slowdown would line up badly for Trump, who has called the current economy the best ever and faces reelection in late-2020.

Bernanke, who stepped down from the U.S. central bank in 2014, is a distinguished fellow in residence at the Brookings Institution in Washington.

The degree of slowdown as stimulus fades is a matter of debate among economists, with some predicting the effects could last beyond two years if the U.S. boosts its capital stock and upgrades its workforce during this period of strong growth. Congress could also write new spending laws to smooth out the program, Bernanke noted.

With the stimulus coming at a time of already-low unemployment — the jobless rate was 3.8 percent in May, matching the lowest in almost five decades — Fed officials have projected inflation as likely to overshoot their 2 percent target, resulting in a slightly restrictive monetary policy in the future.

Bernanke was followed at the AEI discussion by former Fed Governor Kevin Warsh. A distinguished fellow at the Hoover Institution in Stanford, California, Warsh said he would speak loosely from his prepared remarks and joked: “I am not going to speak as loosely as Ben did when he made the Wile E. Coyote reference and what happens to the economy in 2020.”

So, who’s right? Ray Dalio and Bridgewater who see trouble next year or Ben Bernanke who sees a ‘Wile E. Coyote moment’ in 2020?

The honest truth is nobody really knows because I can make a case that the second half of the year will be a lot tougher than the first half and if we get a nasty surprise in financial markets due to something blowing up in Europe, emerging markets or in La Malbaie, Quebec where ‘G6+1’ trade talks are going on, then the fallout will happen sooner rather than later.

There are a lot of things going on in the world which could derail markets and the global economy. Earlier today, I was reading a flood of upcoming elections could wreak havoc on financial markets.

The economy has many moving parts:

Let me stop there and show you the weekly charts of the US Dollar ETF () and emerging market shares (): 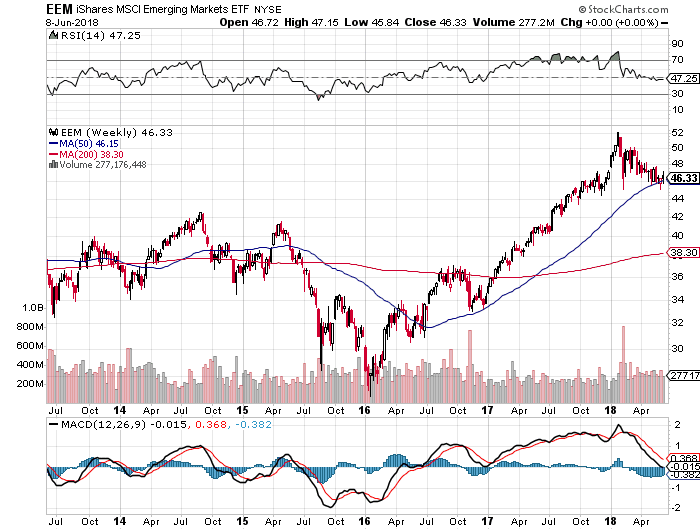 As I stated recently, I was expecting the greenback to pause its ascent before resuming its longer term uptrend, which it did, giving emerging market shares some breathing room but so far they haven’t rallied.

Without getting too technical, there could — and I emphasize could — be a double-bottom forming on emerging market shares but they do make me nervous and as I’ve been warning you, use any strength to go underweight or even short them.

Anyway, that’s all from me, don’t fret too much about the economy’s or the market’s ‘Wile E. Coyote’ moment, at least not yet. 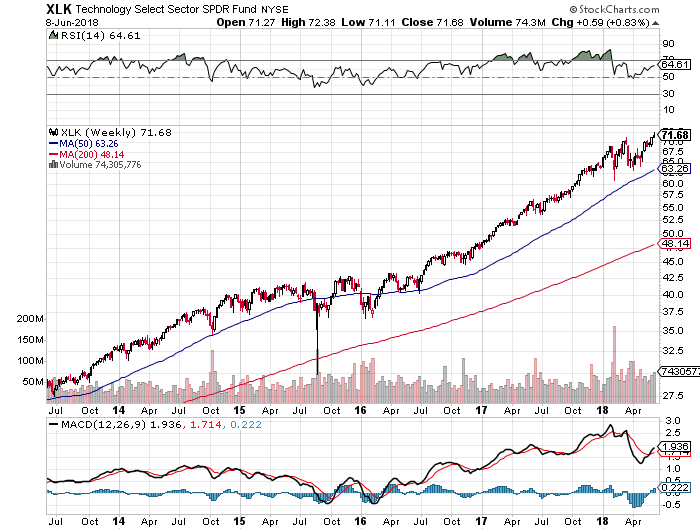 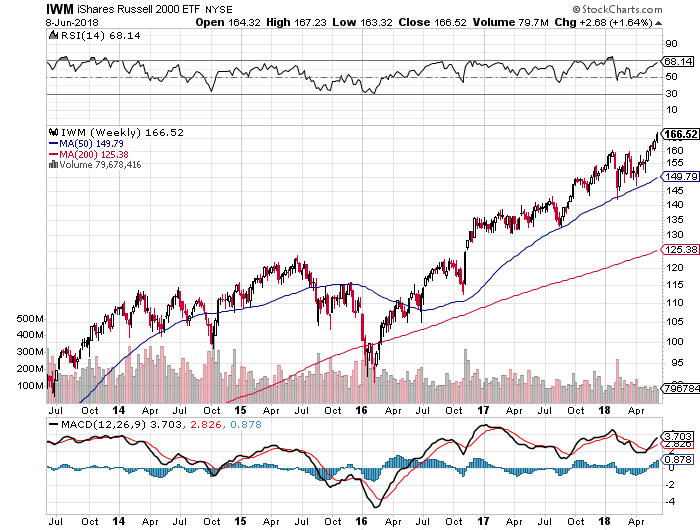 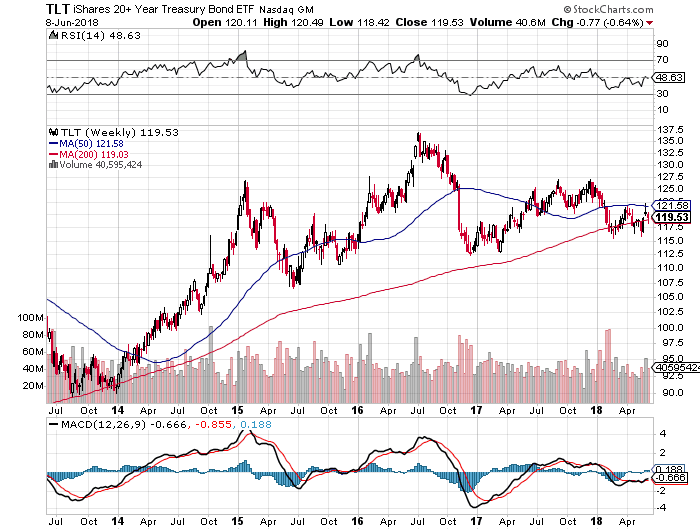 What all this tells me is people are cautiously optimistic but the bond market has the final say and thus far, the yield on the 10-year Treasury remains below 3%.

Of course, if the US economy starts growing by 4.5% you should expect that yield to climb higher but if the global ex-US economy slows or has its ‘Wile E. Coyote moment’ then the US long bond yields will go much lower (and long bond prices much higher).

All this to say, enjoy the summer melt-up if it comes but HEDGE any potential downside risk via US long bonds (TLT) and don’t get caught flat-footed.

Below, AEI’s Desmond Lachman interviews former Fed Chairman Ben Bernanke on considering the experience of these QE policies and the lessons to be learned (fast forward to minute 22 to get to the good part).

Lastly, as members of the G-7 meet today in Canada, Benn Steil, Council on Foreign Relations, and CNBC’s Mike Santoli discuss the big topics leaders will be tackling including trade.