The real cost of borrowing money in the gold sector today is much higher than it was in 2011-2013. And make no mistake, the chickens will come home to roost.

Hey Marin, we don’t invest in gold companies for yield. We invest in gold stocks as a hedge to the overall markets. And for leverage on the price of gold.

What a bunch of nonsense.

Have you ever heard the phrase, “What a gold mine!”?

That common, age-old expression was actually a positive reference to having something very valuable. Notably, a gold mine that paid its owners very well by producing gold.

Yet in the last two decades (the span of my career), gold miners have been anything but responsible dividend payers to their owners – the shareholders.

It’s a theme I’ve been introducing to my readers over the last couple of months. And this topic is picking up major steam.

Investors (and capital) are starting to wake up.

While executives have made fortunes running the larger gold producers, the shareholders have been given the shaft (no pun intended)! Cash and stock compensation for executives continue to grow. Yet, dividends to shareholders for the most part have gone in the opposite direction.

It’s no wonder wealth funds like the Norwegian Sovereign Wealth Fund – with trillions under management – have been cutting weightings in the mining sector for a decade. Take a look… 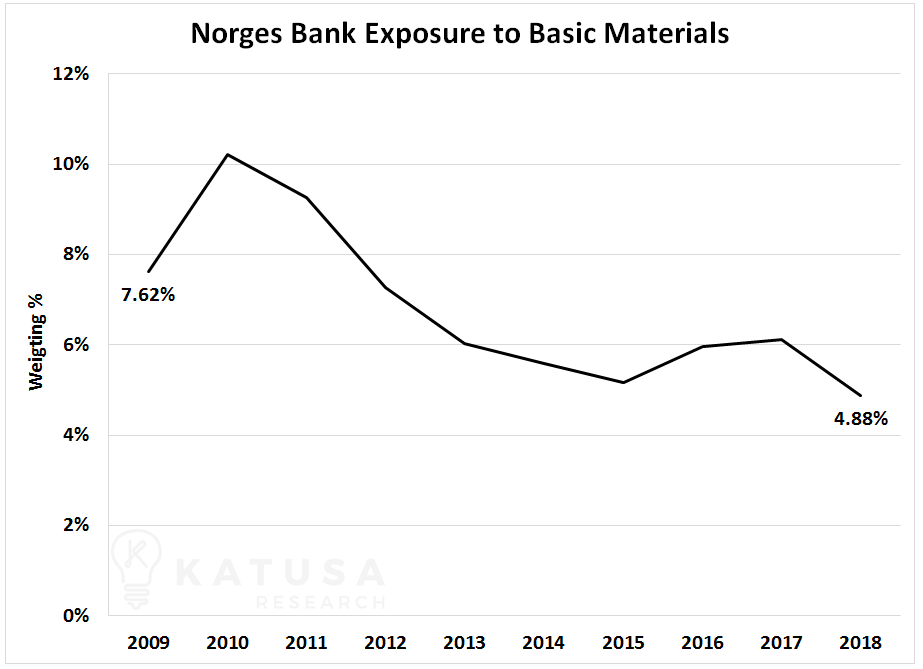 Within a generation, the gold sector has gone from being one of the best yield producers in the global markets to one of the worst.

To analyze the dividend history of producing gold companies over the last century was demanding. We spent countless hours in public and university libraries. Our team combed through the last 107 years of business newspapers on microfiche.

I was hoping to find this data compiled by someone else, but we couldn’t find it. So we had to do it ourselves.

You will not find this information anywhere else in the world.

The chart below shows the average yield, since 1912, of gold producing companies. This includes the special dividends, where data could be found. The trend is crystal clear: Shareholders are getting less and less in dividends from gold producers. I’ll explain why later. 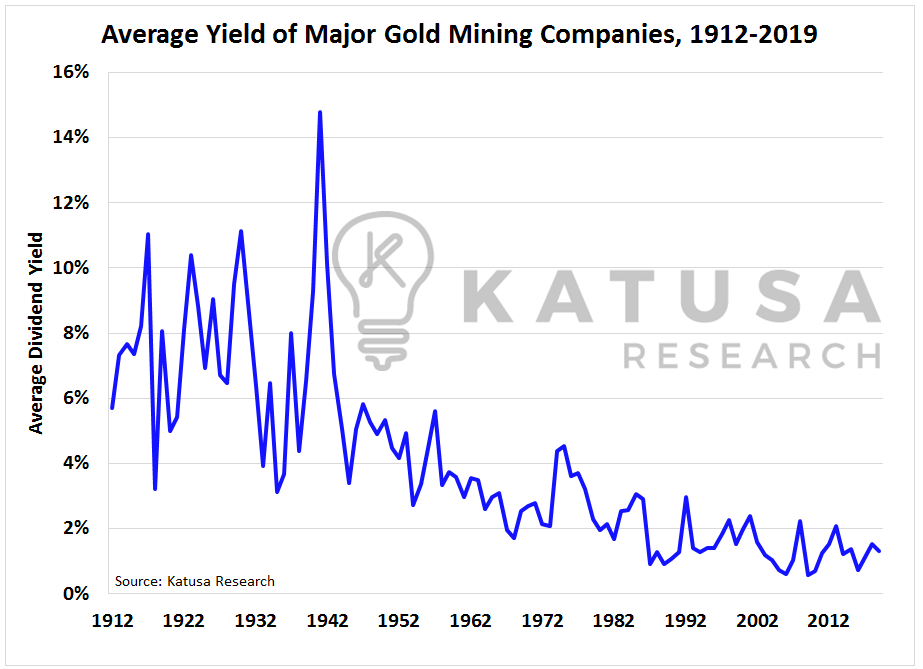 The Unwinding of Golden Leverage

The gold sector has treated shareholders very poorly over the last two decades. And I detailed it all when I published my piece on The Golden Trap of Leverage.

Look, unless you sold gold stocks in early 2011, share prices have fallen for most companies.

There are a few exceptions, like Kirkland Lake Gold , , which is the top performing gold producer the last few years. It was a KRO pick in 2017 under CAD$7.

With a decade’s worth of languishing gold stock share prices, the appetite to keep funding these burning matchsticks continues to fall.

Equity financings on the TSX and TSX-V are down 70% in a decade. Don’t believe me? Check out the chart below. 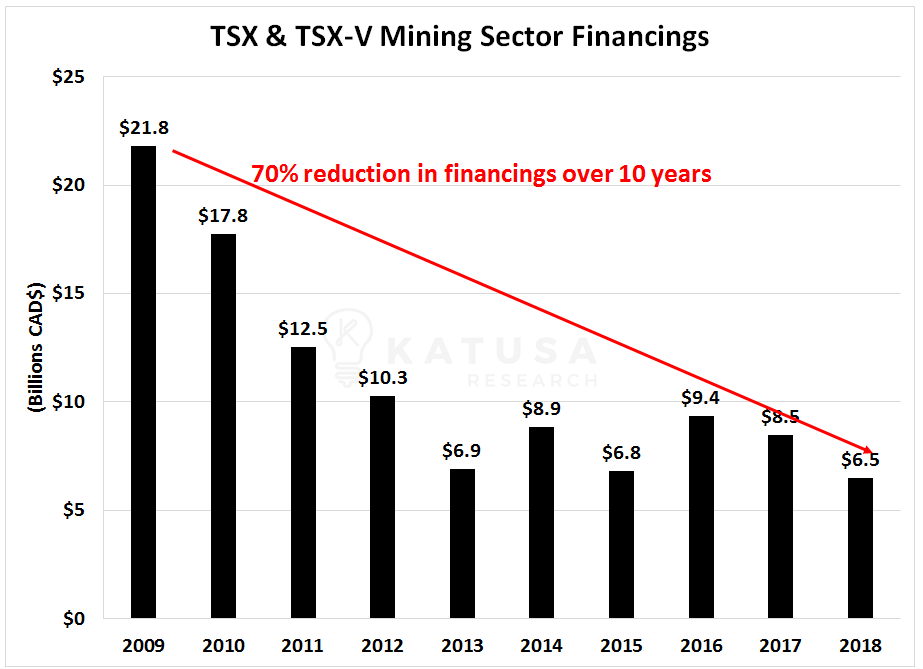 But you and I both know that the problem with debt is that you eventually have to pay it back.

In the corporate world, there is no such thing as a debt jubilee – when the debt issuer has to forgive the debt.

As you know, I spend a great amount of time focusing on balance sheets. And I’ve been intimately involved with a couple mine start-ups from exploration to production. Not to mention lots of involvement in financing the construction. You can learn a thing or two from my experience that analysts don’t pay attention to when they build their spreadsheets.

Because of the Global Financial Crisis, the entire gold sector has adjusted its understanding of financing using cheap debt. Little did they know they are hooked on financial heroin.

Its new understanding is just unrealistic…

The real cost of borrowing money in the gold sector today is much higher than it was in 2011-2013. And make no mistake, the chickens will come home to roost.

All of this reminds me of my favorite line from the gangster movie Goodfellas.

The movie isn’t for everyone (a lot of swearing and gruesome killing; rated R/18A), but Robert DeNiro, Joe Pesci and Ray Liotta are great in the movie. Here’s the line from Henry Hill…

Bankers aren’t as ruthless as the mob. But the shareholders will be wiped out just the same. If the debt burden is too high, very little will be left for the shareholders’ (equity) side of the ownership.

Marin, What About Your “Extend & Pretend” Theory?

Over the years, I’ve written in great detail about the oil patch and how the massive debt issues would be extended by access to capital looking for yield. (Here’s a link where I discuss Extend & Pretend.)

In this scenario, the existing loan would be refinanced. The term of the loan would be “extended” and the company and bankers would “pretend” everything is okay.

The oil patch played out exactly as I wrote a few years back. The worst companies went bankrupt, but most managed to kick the can down the road another few years.

In the May issue of Katusa’s Resource Opportunities, I will revisit a report I wrote four years ago that made mainstream media news. This time, unfortunately for the shareholders, the outcome will be different.

It’s all in the math.

I believe we are reaching a point in the energy AND gold sectors where two things will happen:

It’s kind of like the “bigger is better” and the “too big to fail” concept. Neither are correct, but that is where the market will be going.

You will see single mine producing mid-tiers, in all commodities, merging.

The question will be… which management keep their plush corner offices and which ones will move onto their next venture?

The one benefit is most of the mining community is getting a bit long in the tooth and they don’t want to stay on. So this issue won’t be as big of a deal as in the 2011-2013 merger bonanza.

Now, you can either buy these fiscally disciplined producers or you can buy the companies that they will be targeting. I’m focusing on the later because there’s better upside if you pick right and sit tight like an alligator.

Why take this approach?

Be it base metals or precious metals, world class discoveries are few and far between. And, it’s cheaper for majors in the current market to buy a world class deposit than the actual cost to find the deposit themselves.

It doesn’t take a rocket scientist to see it’s cheaper to buy the project, than it is to go from grassroots to discovery.

Remember there’s 70% less money around for financing gold projects than there was in 2009. This means that only the very best projects and management teams are going to get funded (this is a good thing).

For the rest, it’s going to be very tough sledding. There’s no room for error in these markets.

Now, tack on a strong USD and rising costs of capital (higher interest on the debt) and it’s downright ugly.

Things Are Heating Up For Our Portfolio

Most people can’t wait for the next episode of Game of Thrones. Count me among them, because “winter is finally coming”. But it’s coming to the resource sector as well. Sorry gold bugs, “winter is coming”.

But my team and subscribers can’t wait until I publish the final results of another ground-breaking chapter in my Golden Debt and Leverage series.

On May 1st, I will reveal the summary data of all the debt in the resource and energy markets to KRO subscribers.

This report was such a monumental task that our data feed providers blocked my analysts for reaching the feed cap – TWICE!

There are two charts in particular that I know will be immediately replicated by institutions and brokerages, and I’m happy to let them. Imitation is the greatest form of flattery.

You’ll want to know the date of the next debt time bomb in the resource and commodity markets.

While most people are concerned with the U.S. government debt…

Smart investors looking to make spectacular bets will be paying attention to the catalyst dates of the corporate debt time bombs.

And if you’re not a subscriber to Katusa’s Resource Opportunities, consider signing up so you’ll be the first to access the research and investment thesis.

P.S. I’m hitting the site trip and conference circuit throughout the month of May. At the top of my list is to finalize my deep dive on 4 gold stocks I want to own a lot of – because they are ticking all the boxes in the formula to become the next front page gold buyout story. Stay tuned…