We’ve all heard this saying.

It means if you want to make big money in the markets, do the following:

Find the smartest investors, buy the stocks they buy, and watch your money grow alongside theirs.

It’s one of the simplest ways to profit in the stock market.

Today, a handful of the world’s smartest and richest “investors” have their sights on one specific corner of the market. In fact, one of these “investors” has already made a historic $70 billion bet. And more are rumored to join the party soon…

The best part? By piggybacking on their big bets, we can potentially double our money over the next 12 months.

So what’s got their attention?

The video game industry is colossal. There are three billion active video game players around the globe. Last year, global gaming revenues hit $180 billion. That’s 3X as much as 10 years ago.

Gaming is now larger than the film and music industries combined!

Disney is America’s largest movie studio by a long shot. Yet, it makes less money than Microsoft’s Xbox gaming sales.

Why are video games the largest force in entertainment? Simple:

Video games are the only form of entertainment that keeps improving.

Think about it… when was your favorite book written? Likely decades ago.

You can’t convince me we’ll see a better movie than The Matrix, Se7en or Pulp Fiction, all of which came out in the 1990s.

Everyone loves music from the ‘70s, ‘80s and ‘90s. But who’s raving about the songs that top the charts today?

Gaming is the total opposite. Remember the arcade game Pong? Two rectangles and a dot. This is what video games were 50 years ago: 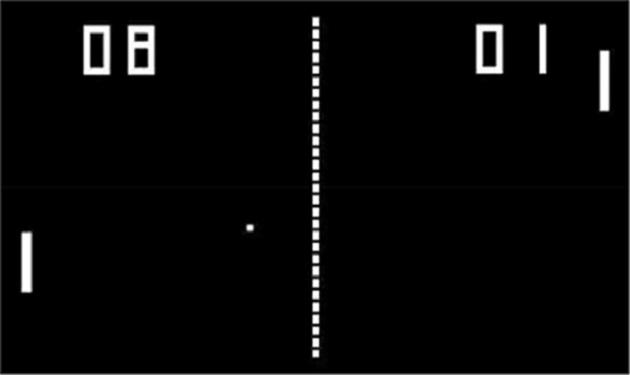 Games improve every year. Better graphics… better gameplay… more immersive worlds you can lose yourself in. This has attracted a billion new gamers in the past five years alone.

But gaming stocks have been a different story.

Video game stocks go through boom-and-bust cycles. They surge in price… often for years… then they run out of steam and decline. 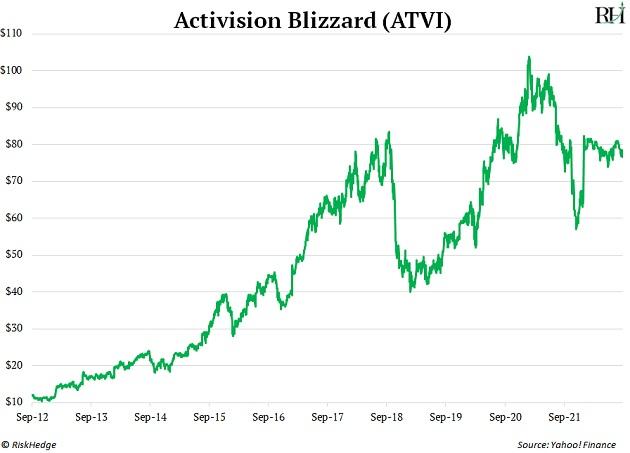 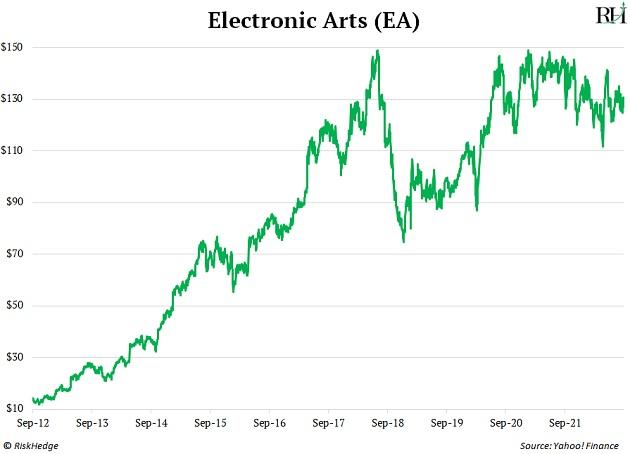 But if you buy at the right time—near the tail end of a bust—you can make incredible returns.

If you bought Activision during the last two busts, your average return would be 400%.

Ditto for EA. Its stock doubled since the bottom of the last cycle. EA shot up 1,200% the time before that.

Where are we in the cycle today?

And some of the world’s smartest “investors” are taking advantage. I’m talking about the biggest, most dominant companies on the planet.

These are some of the most successful companies in history. They know what you now know: Video games are growing unstoppably, and video game companies are trading for no-brainer prices after a multi-year bust.

Here’s how you can capitalize on this opportunity…

Take Two has produced many of the most popular games of the past few years.

It’s the owner of the popular Grand Theft Auto game. The last version sold 170 million copies and made about $6 billion.

Take Two also developed Red Dead Redemption 2—it was an overwhelming success. The game sold $725 million in revenue in three days. It was the highest-earning video game opening weekend of all time—and the biggest opening weekend in the history of entertainment.

In short, Take Two knows how to produce great games… and how to make money from them. It has quadrupled its sales over the past decade.

If you bought Take Two during its last two bust cycles, you could have made average returns of 900%.

I’m expecting the stock to at least double over the next 12 months.

3 Breakthrough Stocks Set to Double Your Money in 2022: Get our latest report where we reveal our three favorite stocks that can hand you 100% gains as they disrupt whole industries. Get your free copy here.