The Big Plunge in Stocks? Look to Emerging Markets

Is it time to panic yet? Not necessarily because emerging markets could retest their lows and then bounce back strong. It all depends on how this plays out.

Too many US strategists and analysts are US-centric and don’t have a clue of what’s going on outside their country, but it’s these trends that matter most right now because another crisis in emerging markets will spread throughout the world.

Stephanie Landsman of CNBC reports, Stocks could plummet 20 to 30 percent next year in biggest drop since financial crisis:

The bulls may be treading water.

According to Ned Davis Research’s Ed Clissold, there’s a high probability a record year-end rally will give way to a painful 2019.

“You could be looking at the first 20 percent-plus decline in the S&P since the financial crisis,” the firm’s chief U.S. strategist said Tuesday on CNBC’s “Futures Now.”

His worst-case scenario is a 30 percent plunge next year.

“Our primary list of concerns is on the earnings front,” Clissold said. “Earnings growth north of 20 percent isn’t sustainable, especially when you’re nine years into an economic expansion.”

“We’re certainly a lot further along than we were a couple of years ago certainly in the economic cycle,” Clissold said. “From a technical standpoint, leadership has certainly gone from being more aggressive to more defensive. … More defensive sectors like health care, utilities, staples and telecom have been leading as of late.”

Despite his cautiousness, Clissold hasn’t officially downgraded his positive outlook on U.S. stocks. His S&P 500 year-end price target is 2,900 — about a 1.5 percent gain from current levels. He said stocks could soon see a short-lived pullback mainly do to seasonal trends at any time, and then grab gains as the year winds down.

“From [the] 2009 lows, whenever we got a pause, we’d break out of what we’d call a breadth thrust. You’d get a huge percentage of stocks moving up together, and that’s a sign of a very healthy market,” Clissold said. “We haven’t gotten one since the February correction, and that’s a change in character. It doesn’t mean the market can’t rally for a while. But, that’s what happens at the end of a bull market, not at a beginning for a bull market.”

It’s Friday and that means less pensions, more markets for my blog readers.

So, is Ed Clissold right? Are markets going to plunge 20 to 30% next year? Who knows? Markets can plunge 20-30% next quarter if all hell breaks loose in Turkey and spreads to other emerging markets.

At this writing, the iShares MSCI Emerging Markets ETF () is down 2%, rolling over and at risk of revisiting its yearly low and the US Dollar Index () is close to making a new 52-week high (click on charts): 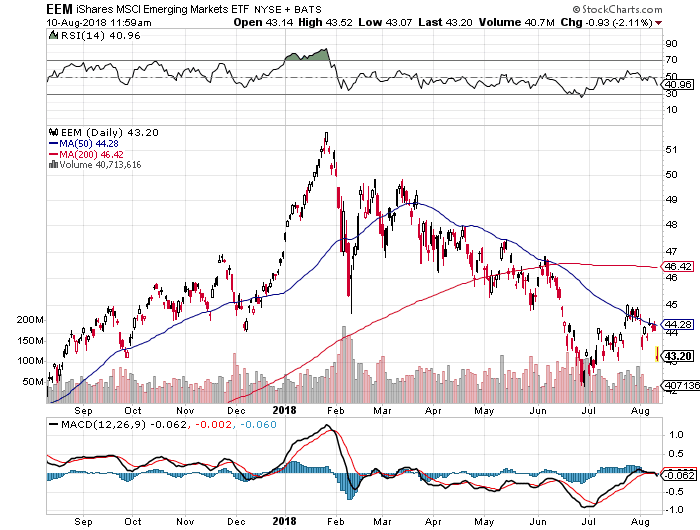 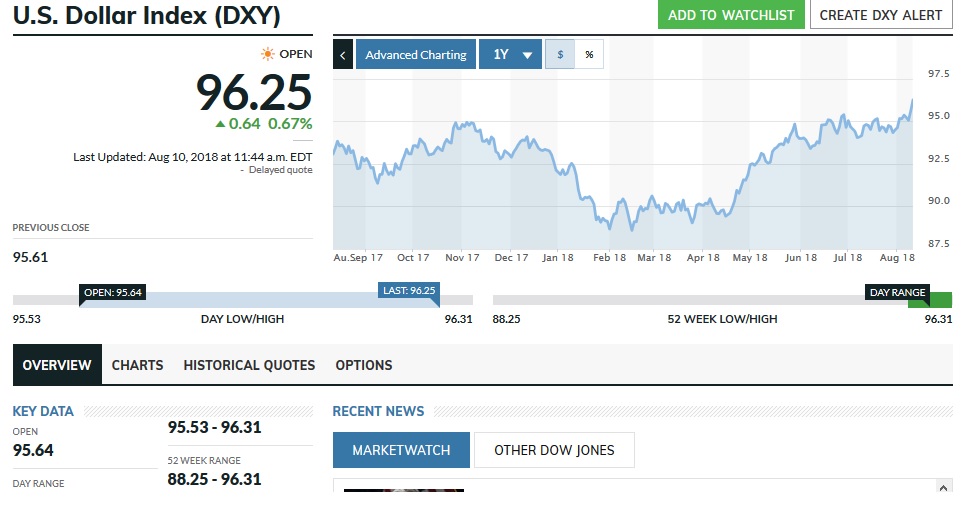 Unlike Ned Davis Research’s Ed Clissold, when gauging public market risks, I’m looking at what’s going on outside the US.

Too many US strategists and analysts are US-centric and don’t have a clue of what’s going on outside their country, but it’s these trends that matter most right now because another crisis in emerging markets will spread throughout the world.

President Trump is pouring gas on a fire by imposing tariffs on China and now Turkey. He may have good reasons for stepping up the pressure on Turkey but the effects of tariffs and diplomatic spats are unnerving markets, sparking fears of contagion:

Is it time to panic yet? Not necessarily because emerging markets could retest their lows and then bounce back strong. It all depends on how this plays out.

But the stronger US dollar (), a macro call of mine since the start of the year, is cause for concern because it’s telling you global investors are on edge (click on image): 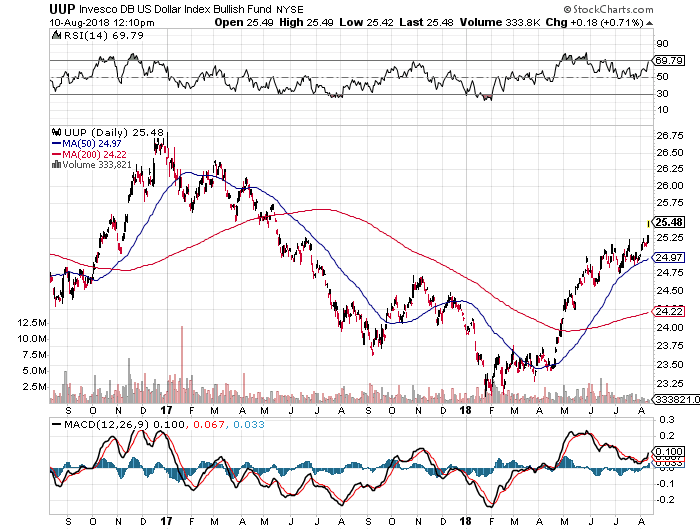 The chart above is very bullish for US dollars and bearish for emerging market stocks () and bonds ().

Remember, there is a lot of dollar-denominated debt out there and the stronger dollar is crushing many emerging markets who can’t export their way out of a crisis given that Trump is imposing tariffs on them. For example, even if the Turkish lira plunges, it doesn’t boost Turkish exports because tariffs are being imposed.

Who cares about Turkey and emerging markets? As long as FANG stocks keep rising, everything is fine. Right?

Well, it’s not that simple. A crisis in emerging markets heightens the risk of a global deflationary shock, one that will clobber global risk assets, send the US dollar higher and boost US long bonds () which haven’t done anything all year but seem to be breaking out here (click on image): 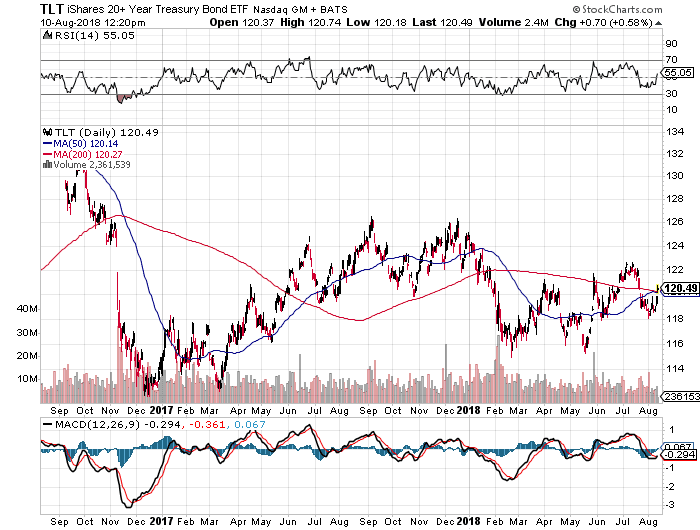 And remember, a stronger US dollar means lower oil and commodity prices and lower import prices going forward, so even if you have some cyclical inflation pressures now, it won’t be sustained.

This is why when people tell me the bond bear market is just beginning, I ignore them. Sure, President Trump might announce a trillion dollar infrastructure program next year but that will be too little too late. By then, the damage will be done and the global and US economy will be in a recession.

The wildcard here is the Fed because if it ignores developments outside the US and continues raising rates, the yield curve will invert and it will exacerbate the global deflationary crisis.

All this to say, it’s very hard to know whether the stock market is entering a destructive phase, I personally think it’s premature to conclude this. However, it is time to get defensive and position your portfolio for an eventual slowdown.

As I stated last week, right now, if I were recommending where to allocate risk, it would be in defensive sectors like healthcare (), utilities (), consumer staples (), REITs () and telecoms (). And I would hedge that stock exposure with good old US long bonds ().