Examining the impact of the program that pulled the global economy from the abyss. 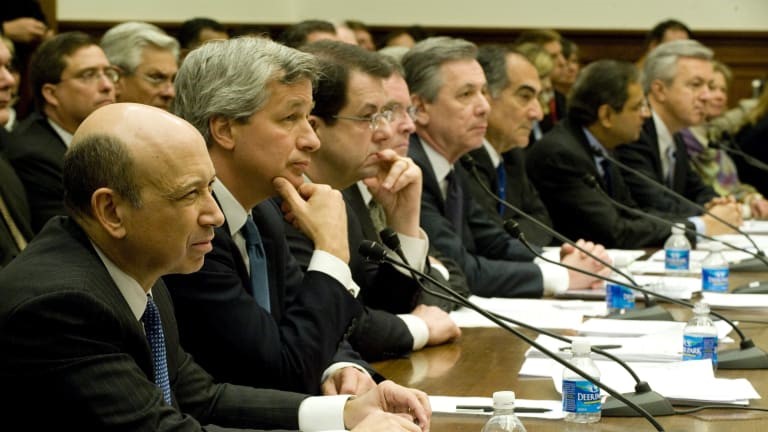 There are discussions of easing the Volker Rule, which was enacted as part of the banking reform necessitated by the 2008 financial crisis. The Volker Rule limits banks’ exposure to their proprietary trading positions. These discussions have triggered a number of articles that review the crisis and typically refer to the Troubled Asset Relief Program (“TARP”) as a Wall Street “bailout.” So, I have been using the opportunity to ask colleagues if they think taxpayers made or lost money on TARP.

The most frequent answer is, “what is TARP?”

The second most frequent one is, “we lost a ton of money and I am pissed off that no one went to jail.”

The term “bailout” implies that taxpayers dumped $700 billion into the banks and never saw a return. In reality, the government made an extraordinary return on TARP and those profits were reinvested into mortgage relief programs. This article will: (i) briefly rehash the events that led to the crisis, (ii) review the TARP structure and (iii) present the return on investment of the TARP program. I will also share some of my observations.

Lew Ranieri of Salomon Brothers, the godfather of mortgage backed securities (“MBS”), created the market in the 1980s. The function of this market was to buy the home loans from banks, bundle them into one security, sell that security to investors and, in turn, provide the banks with the liquidity they need to make more loans.

The investment theory of the MBS market is that it is safer to invest in a pool of mortgages than just one. This capital market worked efficiently for two decades, thereby providing potential borrowers with the debt they needed to buy homes.

In the mid-2000s, the demand for these securities increased dramatically, causing home lending standards to decline precipitously, particularly in the sub-prime market. These lax criteria were epitomized by the “negative amortization mortgage,” in which the borrower’s payment did not cover the full interest amount. The uncovered amount was then added to the principal amount. These lower standards were accepted because the market assumed that real estate values would always rise.

Due to the lack of regulation in the MBS market, profits in this sector were unprecedented. Wall Street CEOs, who were judged against their peers, had no choice but to take aggressive positions in MBS securities, using debt (or financial leverage) to do so. If Wall Street CEOs did not have a significant position in the MBS market, their firms’ earnings and stock prices would lag behind those of their competitors.

A portfolio of sub-prime mortgages magically became investment grade after AIG effectively guaranteed the principal of the bond through an instrument called a “credit default swap.” (If AIG had called it “insurance,” it would have been regulated by the insurance commissioner.) Once AIG provided a bond with a credit default swap, the rating agencies were cleared to provide it with an investment grade rating.

In the middle of 2007, the economy weakened, and mortgage default rates rose. The theory that real estate always appreciates was being tested, and the markets became very nervous. Because of financial leverage, a modest decline in real estate values magnified losses and threatened to wipe out a large portion of banks’ equity capital. Starting at this time, the Federal Reserve and Treasury used the tools at their disposal (lowering the fed funds rate, increasing liquidity through the purchase of treasury bond, etc.) to temper the negative impact. However, these tools were not potent enough and confidence in the banking system began to erode.

This point is exemplified by the dramatic widening of the TED Spread, which is the difference between the interest rates on interbank loans and on short-term U.S. government debt (“T-bills”). It is a measure of the perceived risk of the largest banks. As shown below, from January 2001 through July 2007, the average spread was 36 basis points. From August 2007 to December 2008, that average increased 4.55 times to 155 basis points. In October of 2008, it reached 458 basis points (13.5 times greater than the average), which was the Global Banking System’s equivalent of the zombie apocalypse. To put this market reaction into even greater context, the TED Spread maxed out at only 63 basis points after 9/11. 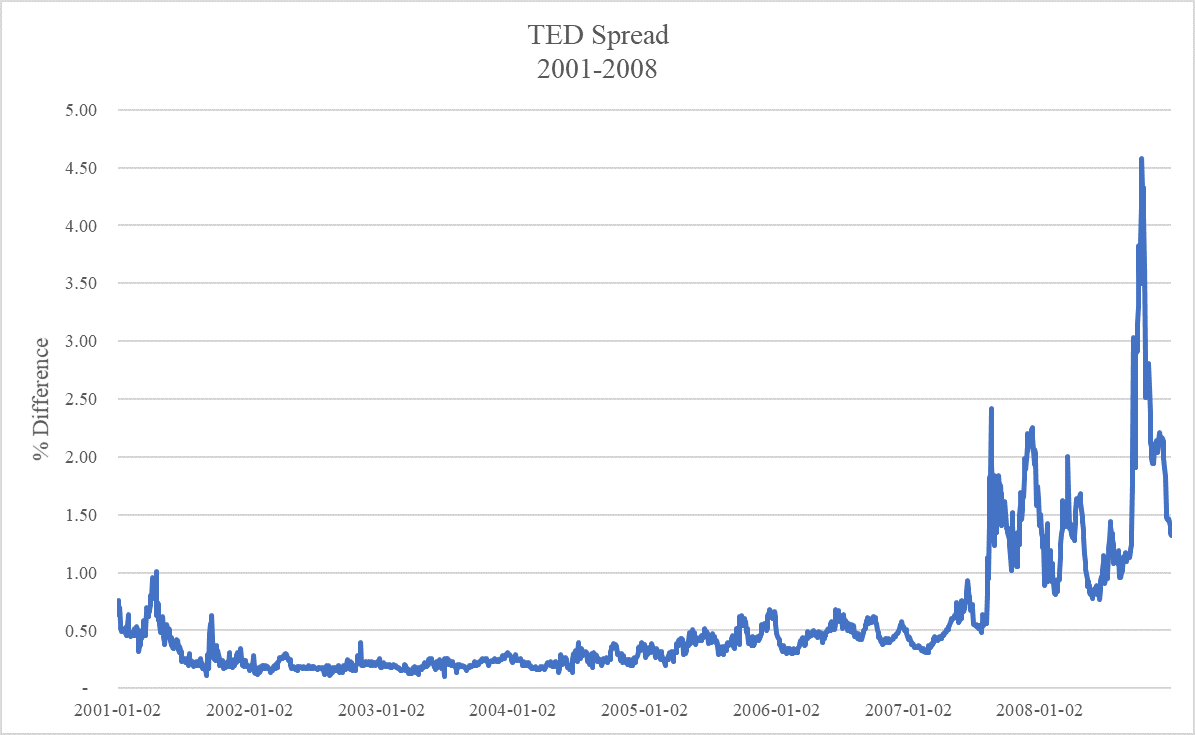 Effectively, the banks stopped lending to each other because one could not gauge the other’s potential losses caused by their positions in mortgage backed securities. Conventional tools were not working. The global financial system was in real trouble!

The seminal event of the crisis was the bankruptcy of Lehman Brothers. Lehman’s strongest division was its commercial paper operation which arranged short-term loans to the world’s largest companies. When Lehman went bankrupt, companies lost access to short term funds and became concerned they would not be able to cover payroll. This led to a liquidity squeeze in the global banking system as clients started to withdraw funds from accounts.

The Treasury and the Federal Reserve realized that if it let another financial institution fail, the whole system could topple like dominoes.

TARP and its Results

On October 3, 2008, President George W. Bush signed into law the Emergency Economic Stabilization Act of 2008, which created the $700 billion TARP Fund. The original purpose of the fund was to purchase illiquid, toxic MBS “assets” from financial institutions.

However, Treasury Secretary Hank Paulson realized that purchasing those “assets” would not bolster the financial system quickly enough. So, he pursued a different tack by investing in the preferred stock of the banks and “requiring” healthy banks to take the capital.

Both actions were brilliant. Investing in equity securities enabled the banks to leverage up their balance sheet and, in turn, inject more capital into the economy. Every dollar of equity on a bank’s balance sheet creates $10.00 of lending power. Thus, the $245 billion invested in banks created $2.4 trillion of lending power. Second, requiring healthy banks to take the investment eliminated the potential stigma for a bank taking capital from the government.

Ultimately, TARP funds were invested into 4 areas: (i) the Auto Industry, (ii) AIG, (iii) Banks, (iv) the Credit Markets to purchase student loans, auto loans, credit card and loans guaranteed by the Small Business Administration; and (v) the homeowner assistance program. The amounts invested and returned in each program are as follows:

The first thing to note is that TARP utilized only $441.6 billion, even though $700 billion was authorized. As shown above, the program broke even as profits from Wall Street were reinvested into the Auto Industry and Homeowner Assistance Program.

TARP stabilized global financial markets. The Obama Administration, the Treasury Department and the Federal Reserve followed up TARP with new regulation and programs including: (i) A $700 billion economic stimulus package in 2009; (ii) The Dodd-Frank Act; (iii) Stress Testing; and (iv) Quantitative Easing. All of these programs pulled the global economy from the abyss and created 40 consecutive quarters of economic growth as shown below: 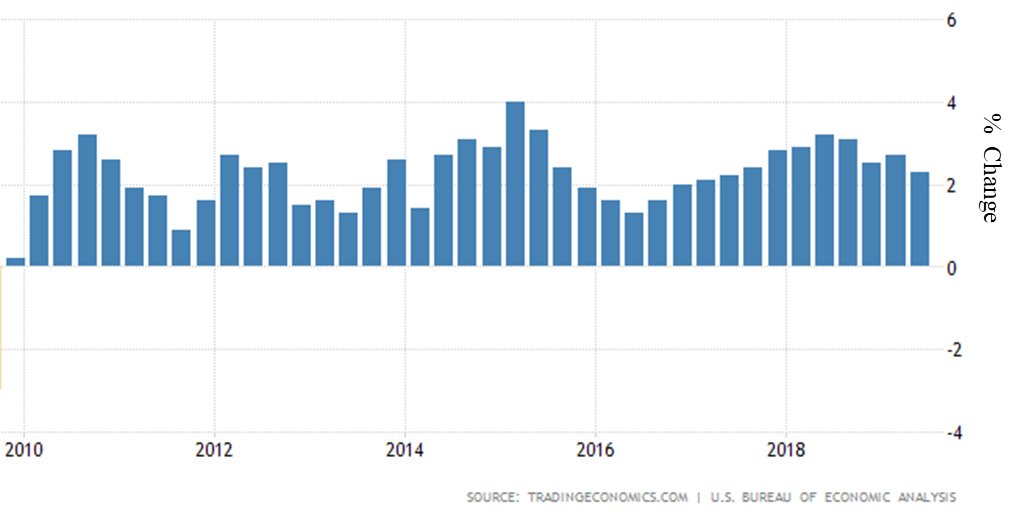 First, I hope that history treats Dick Fuld, the former CEO of Lehman Brothers, better. To date, he has been used as the poster child for greed on Wall Street even though Lehman did not receive a penny of the TARP funds. In fact, it was his unintentional “sacrifice fly” that focused the regulators on the dangers of allowing another financial institution to go bankrupt. As a result, the Emergency Economic Stabilization Act of 2008 was passed in record time.

Second, those in the media, government or the presidential race who are trying to be provocative by forecasting “another 2008” need to do their research. Dodd-Frank has put in almost 30,000 new regulations that dramatically limit a financial institution’s ability to lend and trade for its own account. In fact, perfectly creditworthy entrepreneurs are having difficulty accessing bank financing because of these regulations.

Further, “moral hazard” (the concern that a party will take undue risk to make a profit if they believe they will be bailed out) is not an issue because no bank CEO wants to suffer the same fate as Dick Fuld. 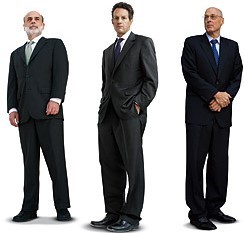 Finally, we are incredibly lucky that Bernanke, Geithner and Paulson were in office during this crisis. Bernanke’s gravitas, resulting from his years of service and exceptional knowledge of The Great Recession, catalyzed Congress to act. Geithner’s respect among the leaders of the money center banks gave him the credibility to push bank mergers, most notably Bank of America and Merrill Lynch. Paulson’s humility, tact and convictions enabled him to successfully navigate TARP through Congress and implement the program.

This team pulled our economy from the abyss. Each deserves a Nobel Prize.