Stocks rallied for a fourth straight week as earnings season officially begin and positive news was released between China and the U.S.

Stocks rallied for a fourth straight week as earnings season officially begin and positive news was released between China and the U.S. The market has regained more than half its losses over the last few weeks and broke above near term resistance (50 DMA line). The next level of resistance to watch is the longer term declining 200 DMA line. In the short-term the market is very extended to the upside and way overdue to pullback. More time is needed for us to know if the bear market is indeed over, or, if this is just a very strong bear market rally. 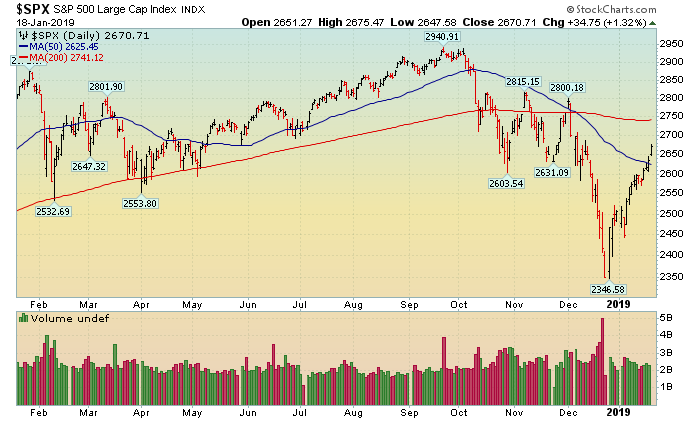 The two big forces which triggered this very strong rally are the Plunge Protection Team and The Federal Reserve shifting its stance and moving back into the dovish/easy money camp. Remember, bear market rallies look great and make you feel like the selling is over and everything is back on track before sellers reemerge and send stocks lower. If the bear market is indeed over then this will be the shortest bear market in history and we will have a lot more chances to buy in the near future.

Stocks fell on Monday after China reported weaker than expected economic data and investors waited for a busy week of earnings. Stocks rallied nicely on Tuesday after the first wave of big banks reported earnings. JPMorgan rallied even though the company missed fourth quarter profit estimates as bond trading slumped. In other news, Wells Fargo fell after the company reported earnings. Overseas, the U.K. voted against BREXIT which was largely expected and did not spook investors.

Stocks rallied on Wednesday after several big banks reported earnings. Goldman Sachs was the big winner of the day and rallied sharply after the bank reported earnings. In other news, Sears reached a $5 billion deal with its Chairman, Eddie Lambert, to keep 400 stores open. The market opened higher but ended in the lower half of its range which may be a near term sign of fatigue as it flirts with important resistance (50 DMA line).

Stocks rallied on Thursday after rumor spread that the U.S. and China were considering taking action to reduce trade tensions. After the close, Netflix, the first FAANG stock to report earnings, fell after lowering guidance for 2019. Netflix joined Apple , Macys , and several other well-known companies that slashed guidance for 2019.

The bulls are doing their best to rescue the market from falling any further. The market was extremely oversold and is currently bouncing to help work off that oversold condition. Resistance is the 200 DMA line for the major indices. After that, the next big level of resistance to watch is 2018’s high. Meanwhile, support is December 2018’s low. As always, keep your losses small and never argue with the tape.