Sellers Come Out of the Woodwork After Long Hiatus 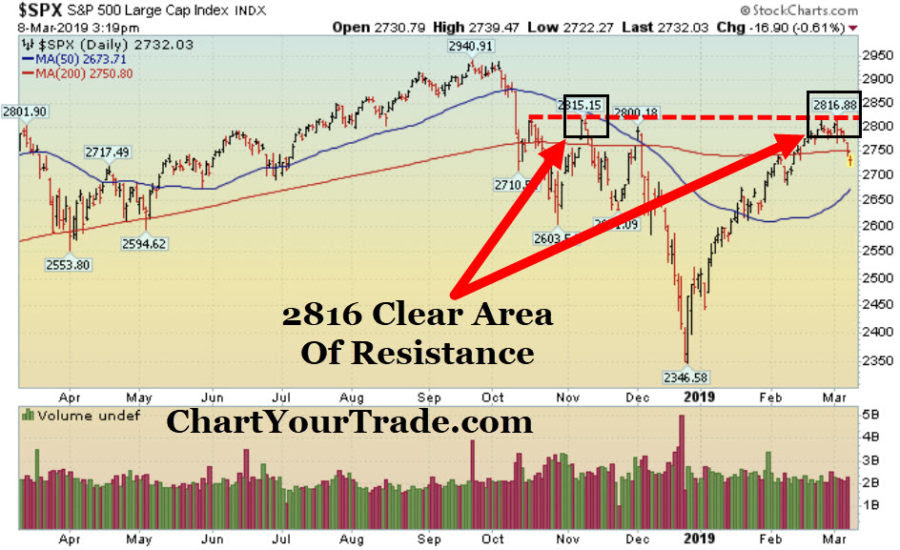 The market fell hard last week and erased almost a month of gains as fear resurfaced regarding a global economic slowdown. Remember, for the past few weeks, I’ve noted that the market was very overbought and way overdue to pull back. Now that the market is pulling back, the key is to see if this is an isolated event or if more selling continues. The major indices broke below near-term support (200 DMA line) and the next level of support to watch is the 50-day moving average. If that level is broken, then this rally will be in serious jeopardy, and the next level of support to watch will be December 2018’s low.

On Monday, the market opened higher but closed lower as sellers finally showed up after a long hiatus. CNBC reported that the U.S.-China trade negotiations are in the “final stages” as the two sides are set to meet at Mar-a-Lago at the end of March. If a deal is reached, the U.S. could get rid of at least $200 billion in tariffs on Chinese goods, while China would remove or cut industry-specific restrictions like those on automobiles. Technically, the bulls showed up and defended the 200 DMA line which is near term support for the major indices as of Monday’s close. Stocks were quiet on Tuesday as investors digested the latest round of earnings data. Shares of Target and Kohl’s jumped after the two retailers reported earnings. The fact that these stocks rallied on strong numbers bodes well for both Main Street and Wall Street.

On Wednesday, stocks fell as investors digested the latest round of economic data. ADP, the country’s largest private payrolls company, said private payrolls grew by +183,000 in February. That just missed the Street’s estimate for 185k. The report also showed that January’s payrolls were revised higher by 87,000 to 300,000. In other news, the U.S. trade deficit rose to a 10-year monthly high of $59.8 billion despite the administration’s efforts to reduce the number. That was higher than the Street’s number of $57.3 billion. That widens the annual number to $891.3 billion, the highest level in history, flying in the face of Trump’s ineffective efforts to restore the balance of trade.

Stocks fell on Thursday after concern resurfaced regarding the global economy. Before the open, the European Central Bank cut its economic growth forecast for 2019 and announced more easy money. The ECB announced a new round of economic stimulus designed to make it easier for banks to lend money to people in the region. That sparked concern about the slowing economy which plagued the market for much of Q4 2018. Stocks fell on Friday on renewed concern about the global economy. Before Friday’s open, the Labor Department said U.S. employers only added 20,000 new jobs last month, broadly missing estimates of 180,000.

The market is under pressure after fear resurfaced regarding a global economic slowdown. Near-term resistance is 2018’s high while near-term support is the 50 DMA line and then 2018’s low. As always, keep your losses small and never argue with the tape. Do you know the most under-valued stocks in the market? Our Members Do. Take a FREE TRIAL – CheapBargainStocks.com