Mapped: Cryptocurrency Regulations Around the World

The world has become increasingly fascinated with cryptocurrencies and the ways they are enabling greater access. 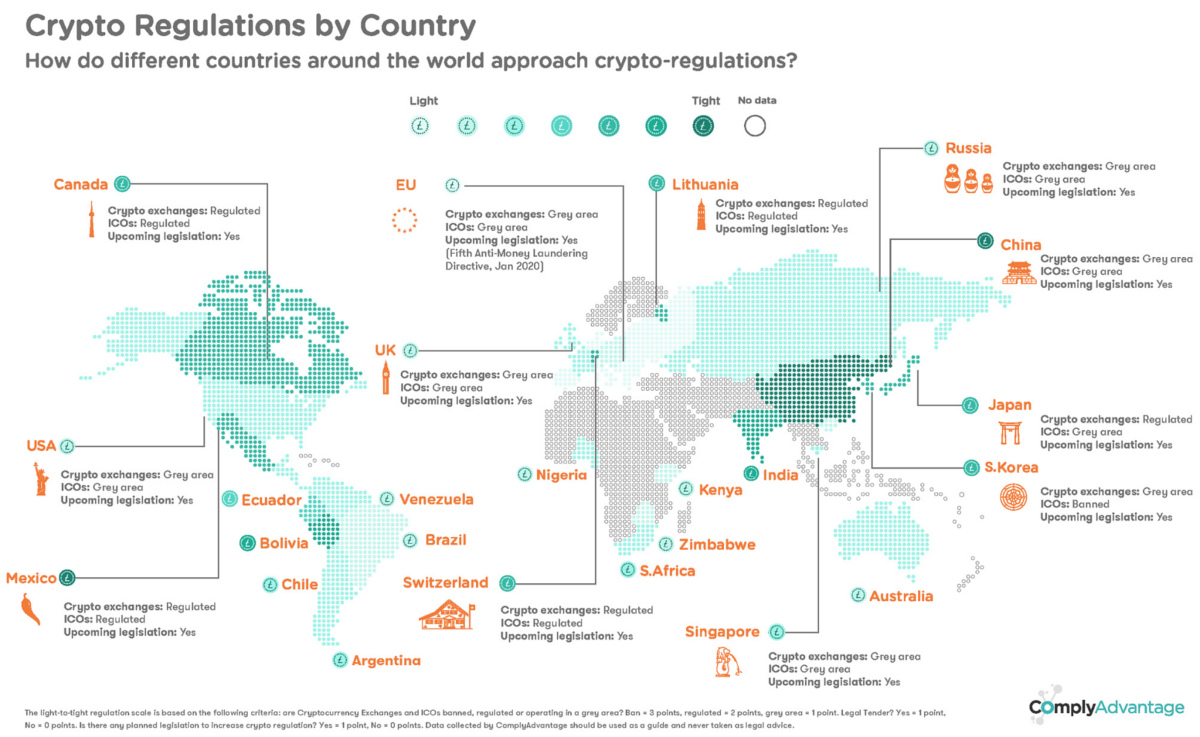 Following the unprecedented cryptocurrency boom in 2017, investors and governments alike could no longer ignore the growth of decentralized finance.

The world has become increasingly fascinated with cryptocurrencies and the ways they are enabling greater access, such as being able to send funds to remote places or securing capital for small businesses.

To aid this, cryptocurrency regulations are being slowly introduced into global financial markets. Regulations help to monitor these emerging digital currencies, and to allow for clearer guidelines and a measure of security.

Today’s graphic from ComplyAdvantage maps out major regulatory cryptocurrency and exchange landscapes around the world, showing how sentiments towards digital currencies are evolving.

To do this, ComplyAdvantage measured cryptocurrency regulatory environments using their own Light-to-Tight scale, based on the following criteria:

Which jurisdictions have the strictest and most relaxed regulations for cryptocurrencies:

Japan has one of the most progressive regulatory climates for cryptocurrencies, widely considering bitcoin as legal tender and passing a law in mid-2017 recognizing cryptocurrencies as legal property. In late 2018, Japan also approved self-regulation for the crypto industry.

By contrast, China currently has one of the most restrictive environments in the world for cryptocurrency. China banned bitcoin transactions in 2013, as well as ICOs and crypto exchanges in 2017?though many have found workarounds through sites not yet firewalled.

Cryptocurrency and exchange regulations in the EU are determined by individual member states, and are considered legal across the bloc.

Digital currency offers great promise, through its ability to reach people and businesses in remote and marginalized regions.

Perhaps unsurprisingly, Switzerland has one of the most open climates for cryptocurrencies and exchanges in Europe. In 2016, the city of Zug, known as “Crypto Valley”, started accepting bitcoin as payment for city fees. Swiss Economics Minister Johann Schneider-Ammann announced his goal in 2018 to make Switzerland the world’s first “crypto-nation”.

Both Canada and the U.S. take a similar approach to cryptocurrency legislation at the federal level, as both countries view cryptocurrencies as securities. However, provincial and state regulations differ widely in their taxation requirements of profits from crypto investments.

The Importance of Cryptocurrency Regulations

Cryptocurrency’s journey is the story of a technology rapidly outpacing the laws that govern it.

Governments around the world are keenly aware of this problem. Members of the G20 published a request in June 2019 for a global regulatory framework for cryptocurrencies to be implemented to better manage the benefits and challenges that cryptocurrencies bring.

Regulation for both cryptocurrencies and crypto exchanges is essential for the future of digital finance?bringing legitimacy to the digital financial market, and making it more attractive for new businesses, established banks, and investors worldwide to more easily conduct business within this emerging ecosystem.