Longest Bull Market In History Is Over

The week was another brutal week on Wall Street as the small-cap Russell 2000 and the Nasdaq both fell into bear market territory. The Dow and S&P 500 also fell closer to that dreaded 20% level. 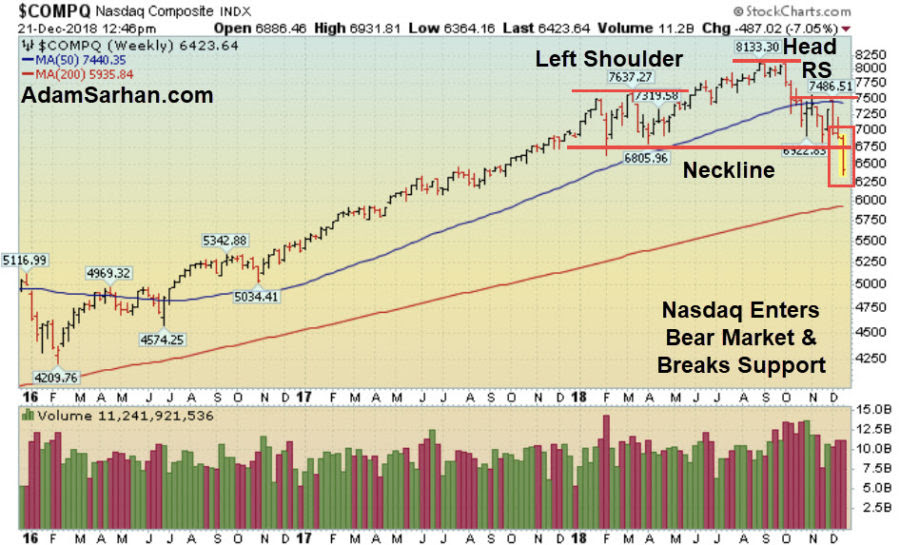 Last week was another brutal week on Wall Street as the small-cap Russell 2000 and the Nasdaq both fell into bear market territory (defined by a decline of 20% or more from a 52-week high). The Dow and S&P 500 also fell closer to that dreaded 20% level. Underneath the surface, the action is much worse as investors continue to dump stocks.

The biggest take-away for me is that the 9.5 year connection between the stock market blindly following the Federal Reserve has ended. Meaning, for the first time since the Bull Market began in March 2009, the stock market is not blindly following the Fed. That tells me that there is a lot more negative action brewing on the horizon- both on Main Street and on Wall Street.

Billionaire investor, Stanley Drukenmiller, has a great line where he says, the best economist on the planet is the stock market. I couldn’t agree more and if you look under the hood, so many important areas of the market are already in bear market territory which bodes poorly for both Main Street and Wall Street. Clearly, the market is speaking, and it is my job to listen.

Stocks fell on Monday as fear spread that the economy will slow considerably in 2019 which may cause the market to fall into a bear market. In other news, DoubleLine Capital CEO Jeffrey Gundlach said Monday that he “absolutely” believes the S&P 500 will go below the lows that the index hit early in 2018 and it will most likely fall into a bear market. Economic news was not great. The Empire State Manufacturing Survey’s general business conditions index, aggregated by the Federal Reserve Bank of New York, fell to 10.9 from 23.3 in November, missing estimates for a gain of 20.6.

Separately, Homebuilder sentiment fell to its lowest level since May 2015 in December as potential buyers delay purchasing new homes despite a pullback in mortgage rates in the past month. Stocks ended higher on Tuesday as the Fed kicked off its 2-day meeting. Tech shares popped from deeply oversold levels. President Trump urged the Federal Reserve to not “let the market become any more illiquid than it already is.” Stocks opened higher but closed lower on Wednesday after the Fed concluded its last meeting of the year. The Fed raised rates by a quarter point and reduced its projections for future rate hikes but the Fed left its future outlook the same which was viewed as hawkish.

Stocks plunged nearly 500 points on Thursday, sending the Nasdaq officially into bear market territory, defined by a decline of 20% or more from its 52-week high. In other news, investors are concerned that the government will shutdown and that could add more pressure to the economy.

Remember, the global economy is slowing materially and right now the slowing people are concerned that the global economy (and US economy) will fall into a recession in the near future. Stocks opened higher but turned lower after the Fed reserved its stance following the market’s strong selloff after its latest meeting. New York Fed President John Williams said the Fed could re-evaluate its view in 2019 regarding future rate hikes.

Stocks are forming a big top and are beginning to roll over and officially hit bear market territory. Right now, the next big levels of support to watch are October’s low and then February’s low. Meanwhile resistance is the 200 and 50 DMA lines & then 2018’s high. If support is breached, odds favor we are heading into a bear market. As always, keep your losses small and never argue with the tape.