If we can substantially slow the rate of infection and flatten the curve, I believe the economy will recover strongly, and stocks will follow.

That was President Donald Trump on Monday, responding to a question on whether the U.S. economy could be sliding into a recession. I don’t know about you, but I found this to be an extraordinary admission from the president, who until very recently has maintained an “all will be fine” attitude with regard to the spread of COVID-19 and its impact on the economy.

We may very well be headed for a recession—some economists believe it’s already here—but we’re most definitely in a bear market, normally defined as occurring when stocks are off more than 20 percent from their peak.

Not only that, but this selloff has been several times steeper than the past two bear markets. Whereas it took stocks approximately 240 trading days to fall more than 20 percent during the tech bubble, and about 190 days during the financial crisis, U.S. equities lost more than 20 percent in under 20 trading days as a result of fears over the coronavirus. As of Tuesday’s close, the S&P 500 was down 25 percent from its high on February 19. 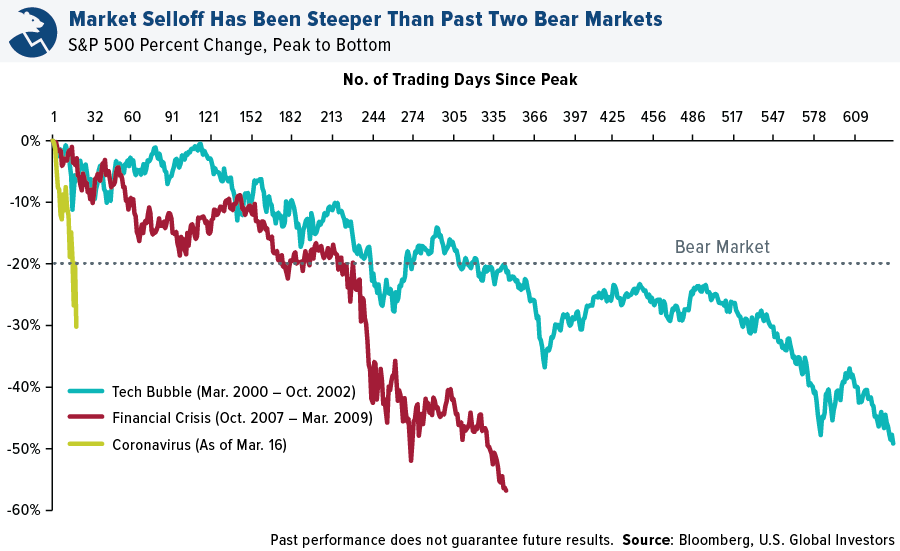 As it happened, the Treasury market was warning us (again) all along. Most downturns of the past have been preceded by a yield curve inversion, which happens when the longer-term yield falls below the shorter-term yield, and this time was no exception. The chart below shows the 10-year Treasury yield minus the three-month Treasury yield. In each case, a recession hit in the months after the yield curve first inverted and began to recover. 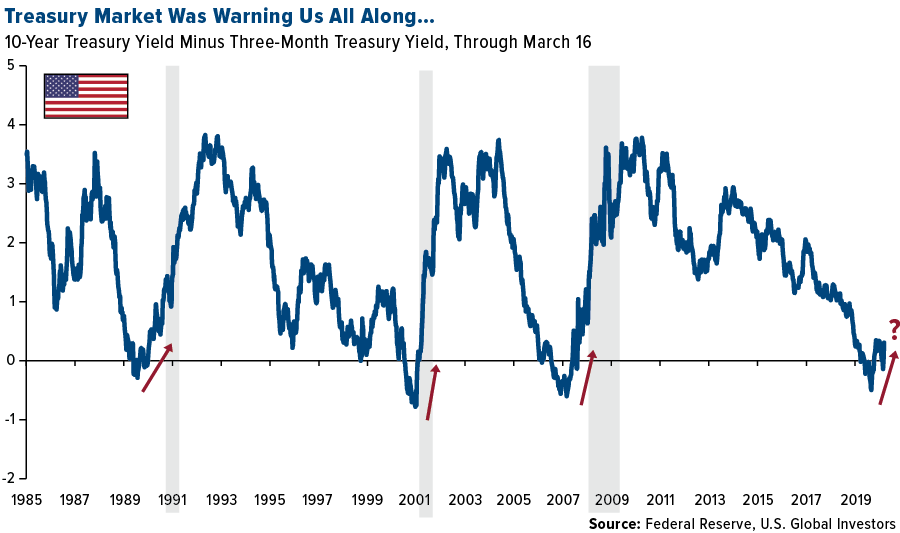 Now the question is what investors should do. It’s been more than a decade since we’ve had to deal with the unique challenges of a bear market, and there are countless millennials (and younger) to whom this is a brand new phenomenon.

A couple of things to remember upfront: Don’t panic. Bear markets can be painful, but they’re temporary. More importantly, if you didn’t raise cash in December or January, before the full effects of the virus began to be felt, it’s probably too late to do so now. It may be a good time to do some bargain hunting for high-quality stocks right now, but generally speaking, I wouldn’t be trying to sell equities.

I understand the need for liquidity. That’s one of the reasons why I always recommend having some physical gold in your portfolio, to convert into cash if needs be. The yellow metal just had its worst week since 2011 for that very reason, falling 9.3 percent as investors took profits amid the plunge in equities.

“Recessions have never been positive for gold,” writes Dr. Martin Murenbeeld in this week’s Gold Monitor. “Gold demand from China and India typically declines… and the need for liquidity also pressures the gold price—gold being a liquidity of last resort.”

On the plus side, says Martin, “the price recovers quickly once the full force of policy responses are unleashed.”

So what are those responses this time? While the Trump administration seeks as much as $850 billion to $1 trillion in emergency stimulus, perhaps part of it in the form of $1,000 checks to every American adult, some are no doubt looking to the Federal Reserve for immediate relief. The problem is, the central bank is quickly running out of bullets.

Take a look at the table below. Since 1969, the Fed has lowered rates 7.4 percent on average in response to recessionary pressure. Today, that’s simply not possible—unless, of course, the Fed took its lead from the Bank of Japan (BoJ) and European Central Bank (ECB) and dropped rates below 0 percent.

Potentially Not as Bad as Past Downturns?

There are a couple of caveats I’d like to point out, though. Number one, no bear market such as this has ever been triggered by a virus or other disease outbreak, according to Goldman Sachs, so we’re literally in uncharted territory. (The U.S. market actually rose throughout most of the Spanish flu pandemic of 1918 – 1920, which killed tens of millions of people worldwide.) Therefore, we don’t know if monetary or fiscal interventions, which may have helped ameliorate previous bear markets and recessions, will be as effective this time.

And number two, there’s always the risk that this event-driven bear market will become a cyclical bear market. As I’ve shared with you a number of times before, we are 11 years into the economic expansion, with debt levels and leveraging at all-time highs. Meanwhile, the U.S. government is already running a $1 trillion deficit. This may limit the government’s ability to prop up the economy should it come crashing down.

The Heat Is On for Trump’s Reelection Bid

At the same time, it should calm markets somewhat to know that Trump has no other choice than to be highly motivated to soften the economic impact of COVID-19, which made landfall in the same year that he hopes to be reelected. No U.S. president in modern memory, going back at least to Eisenhower, has won a second term while there was a recession. Gerald Ford, his immediate successor Jimmy Carter and George H.W. Bush all lost their second-term bids in large part because the economy was on shaky ground when voters headed for the polls. In all other years when a president was seeking reelection, between 1956 and 2012, the economy was either expanding or at least stable.

I believe that if we can substantially slow the rate of infection and flatten the curve, the economy will recover strongly, and stocks will follow. You’ve probably seen the visual below being shared on social media a number of times already. Practicing social distancing can help level out the rate of new cases, preventing our health care system from being overwhelmed before a vaccine can be deployed. 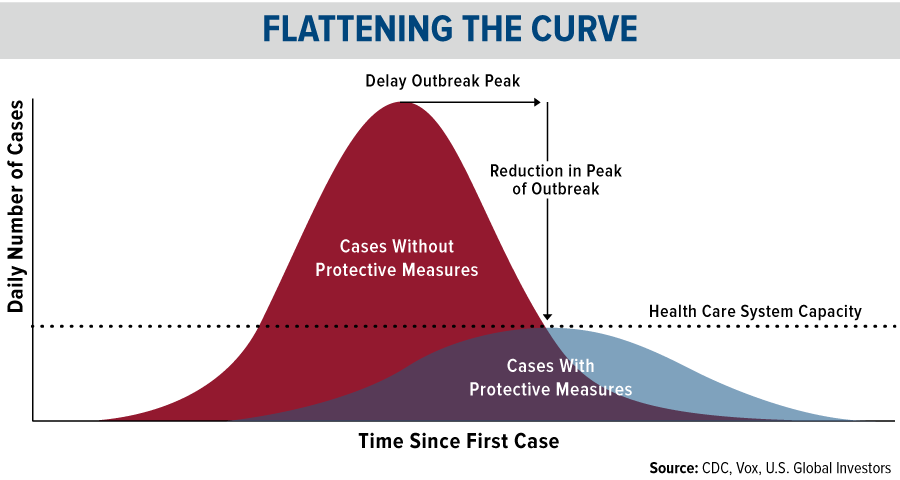 For those who are doubtful of these efforts, I think it’s constructive to look at how successful China has been in combating the virus. The country has taken extreme measures, which has had the effect of lowering the number of existed cases on a daily basis for the past month. From February 17, when the number hit a high of more than 58,000, cases have fallen roughly 83 percent through March 15. This admittedly will have a big impact on China’s first-quarter GDP growth, but it demonstrates that COVID-19 can be stopped in its tracks as long as there’s a plan in place and precautionary measures are followed. 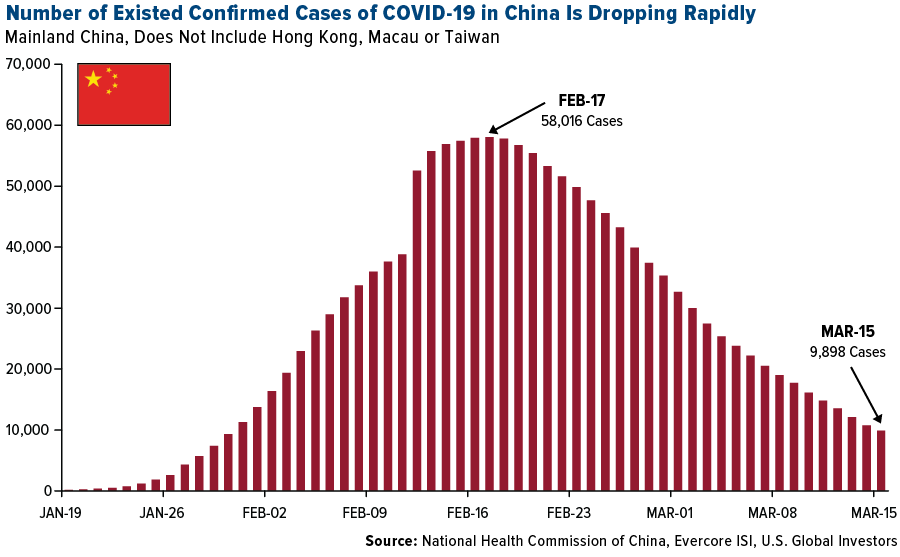 Up until this point I’ve mostly been talking finance. It’s important to be concerned about your portfolio, but it’s even more important to be vigilant about your health and the health of loved ones. The CDC has provided a number of recommendations about how to prevent the spread of COVID-19, as well as what to do if you suspect you or a loved one may have been exposed. I urge you to familiarize yourself with the recommendations.