The nation's largest bank, led by Jamie Dimon, struggled to grow revenues in Q3 with interest rates at near-zero levels.

JPMorgan Chase posted a 24% jump in third-quarter profits on Wednesday, largely driven by one-time items that boosted its results, as the bank struggled to grow revenues with interest rates at near-zero levels.

The nation’s largest bank by assets said it earned a profit of $11.69 billion, or $3.74 per share, compared with a profit of $9.44 billion, or $2.92 per share, in the same period a year earlier. The bank had two one-time items that helped boost its profits this quarter: a $566 million income tax benefit and the release of $2.1 billion from its troubled loans books, something the JPMorgan has been doing every three months since the U.S. economy started recovering from the pandemic.

Excluding those one-time items, JPMorgan earned a profit of $3.03 a share, barely higher than the $3.00 a share that analysts were looking for, according to FactSet. 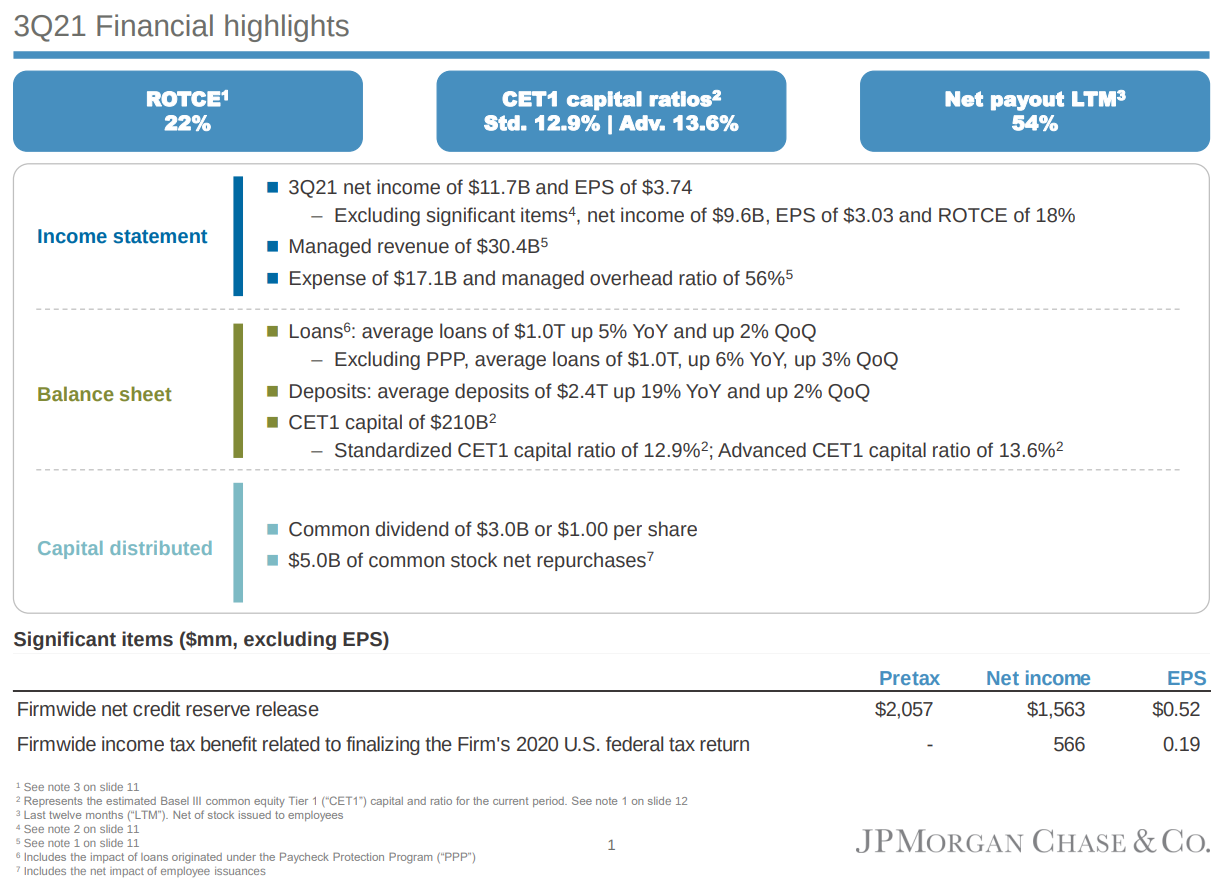 JPMorgan is the first of the big Wall Street banks to report their results this quarter, with Citigroup, Wells Fargo, Bank of America, Goldman Sachs and Morgan Stanley reporting later this week. Investors will be looking to see how banks — which are often a proxy for the overall economy — performed the last three months as the delta variant of the coronavirus swept across the globe and many companies dealt with supply-chain disruptions.

All the banks are facing a growing economy but ultra-low interest rates, which is starting to weigh on banks’ profits since they cannot charge customers more to borrow money. Earlier this year banks were reporting massive jumps in profit, but that was due to banks moving loans they considered at-risk during the pandemic back onto the “good” side of their balance sheet.

Without higher interest revenue or a growing number of customers, investors are likely to see JPMorgan’s results as partly just moving money from “Column A” to “Column B.”

JPMorgan has said just as such themselves. In a statement on Wednesday, JPMorgan Chairman and CEO Jamie Dimon said, “we do not consider these … releases core or recurring profits.”

JPMorgan has roughly $18.6 billion set aside for potentially bad loans, which is down from $33.8 billion in the same period a year earlier.

Third-quarter revenues were $30.44 billion, up 2% from a year ago. The bank earned $14.48 billion in interest income this quarter, down 1% from a year earlier.

The bank got a boost from its investment banking division as well, which has benefited from companies looking to merge or go public in the improving economy and strong stock market. The corporate and investment bank had a profit of $5.56 billion, up from $4.31 billion a year earlier.

Trading revenues were down 4%, reflecting the quieter markets the last three months compared with the pandemic-fueled volatility last year. Meanwhile investment banking fee revenues were up 52%.