Isn’t It Amazing How the Fed Controls the Market?

At the end of the day, no matter what the Fed says or does, the markets rally.

I wonder how many of you had your brains in gear when following the action in the market this past week. For those that did not, let’s review what happened.

First, the market broke out “bigly” on Wednesday, and every media source and investor was absolutely certain that it was due to the Fed chairman’s speech (even though he really said nothing new, as future rate decisions were always going to be data driven). Yet, the next day, the Fed minutes came out that clearly noted they are continuing to raise rates. And, what did the market do on that information? Of course, it rallied further.

So, at the end of the day, no matter what the Fed says or does, the markets rally.

Does anyone else see the intellectual dishonesty in the media and analyst reporting on this one? Why didn’t the same reporters and analysts explain that the market rallied on Thursday because the Fed minutes noted that they were still going to raise rates? I am sure a number of you will try to explain how this can happen. And, in similar fashion, I can scratch my left ear with my right hand by going over the top of my head.

Moreover, if you look at this chart, you will realize that the Fed follows the market and does not lead it when it comes to interest rate moves. 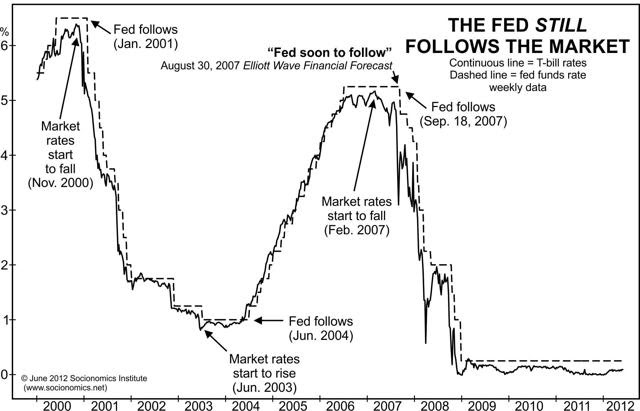 Again, it is the market that leads and the Fed follows, which means you can just follow the T-Bill action to know what the Fed will do. Yet, so many believe otherwise, and believe that the Fed is all powerful and controls all. I know many reading this article certainly believe that. Well, maybe we should not believe our lying eyes?

How about if we bust another fallacy about how government/Fed action certainly saved us in 2008/09: 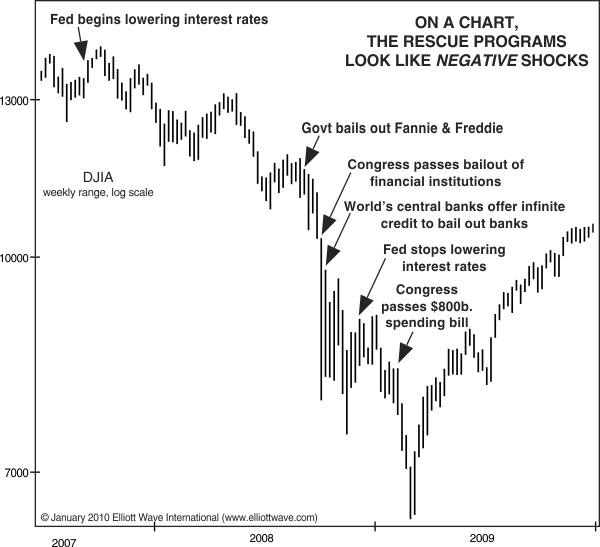 So, just because you see an instance that fits into your perspective of how news “certainly” causes a market move since it coincided with market move (like the rally seen on Wednesday), you would have to ignore all the other times where the exact opposite of what you expected occurred (as shown in the second chart above). And, this is why intellectual honesty does not exist in most media and analyst reports when it comes to market movements.

Now, if you want to know what happened in real time to us while we were tracking the market intra-day on Wednesday at ElliottWaveTrader, this is how it went – and all without the “benefit” of the news.

First, as I noted last week, should the market break out over 2683 (the modified level I noted in the comments section, but which was provided to my subscribers the week before), it opens the upside door in a big way. So, when the market broke out over that level, that was our first signal that the upside door had opened.

Then the market pulled back to 2683 in corrective fashion, and held over it on Wednesday morning. I then noted in an intraday update that the downside into 2683 presented as corrective (as it was only 3 waves down) and it presented us with an “open door” to rally up to 2700+. Minutes after my update, the market began its strong move upward.

While we can view the Fed chairman’s speech as the catalyst for the market rally, I do not think we can view it as the absolute “cause.” And, this is a very big distinction if you want to really understand how the market works. All those who have seen markets rise on bad news or fall on good news will understand what I am saying. In the current instance, the market was extremely oversold, and was due for a bounce. And Mr. Powell offered us a wonderful excuse for that bounce, especially after the market had already broken out through resistance.

So, please save the comments about how “obvious” it was that the market rallied due to the Fed chairman, at least until you can adequately explain all the other times when the market showed the exact opposite of the “obvious” expected reaction to prior news events. It was once “obvious” the world was flat too.

And, for those that are still unconvinced, well, let me ask you this: Why did we rally over 20 points after the massive earthquake in Alaska on Friday? Hmmm.

I am going to close this article with something I wrote to subscribers this past weekend:

While we navigate through the whipsaw we normally see within a 4thwave, try to avoid trading this action too aggressively, as I can assure you that anyone trading aggressively within a 4th wave will certainly be whipsawed at one point or another. So, please do not be swayed by those who brag about being on the correct side of one particular whipsaw move or another. I can assure you they will remain quite silent when they are inevitably on the wrong side of a whipsaw move during a 4th wave or may have even been caught in the downdraft to 2600 off the all-time highs.
After doing this for many years, I can tell you that this is simply the nature of this environment, and we often see way too much bravado during the strong whipsaw moves that are the hallmark of corrective structures. Ultimately, they humble all who trade too aggressively within them, which is a lesson you learn through experience. So, rather than trading aggressively during this environment, most investors should be focused upon capital preservation so that you can redeploy your capital at lower levels once this correction runs its course to take us to those lower targets in 2019/20.
Lastly, keep in mind the famous perspective that “topping is a process.” As I noted once we started breaking down in October, it will likely take months to set up the drop to our ideal target region below. I still think that to be the case. But, ultimately, this market will top out, and provide us with our set up in the c-wave projecting down to the ideal target for this 4th wave in the 2100/2200 region. That is the one trade in this 4thwave that I am personally stalking, and I intend on being patient until the market presents me with that opportunity.