It may not feel like it, but West Texas Intermediate (WTI) oil just posted its best month on record. The American benchmark for crude soared more than 88 percent in May, from $18.84 per barrel to $35.50, as businesses cautiously began to reopen and people returned to work following the coronavirus lockdown.

Even so, global oil demand may never fully recover to pre-coronavirus levels, according to some analysts. I believe this makes alternative and renewable energy producers even more attractive from a long-term investment point of view.

Demand for oil in 2020 may end up being 10 percent lower than the previous year, according to estimates by Bloomberg Intelligence analysts Rob Barnett and Salih Yilmaz. What’s more, oil consumption could very well have peaked in 2019 at about 100 million barrels per day.

“The coronavirus-driven demand shock will probably keep a lid on oil prices for the next six to 12 months,” Barnett and Yilmaz wrote in a research report dated June 4, “and structural changes stemming from the crisis may permanently reset the bar lower.”

But what “structural changes”?

Some see the rise of remote working as the biggest threat to oil demand going forward. Among the many companies that have already told their employees they can now work from home—permanently, if they choose to—are Twitter, Square, Facebook, Shopify and Coinbase.

This may be good for shares of Zoom and other teleconferencing companies, but not for oil demand.

Let’s put this in context: About 45 percent of each barrel of refined oil is used to make gasoline. So when working from home becomes the norm for a large percentage of people, it’s only natural that a substantial amount of oil demand will be wiped out.

And that’s before we factor in the growing popularity of electric vehicles (EV), which is also taking a bite out of oil consumption. Shares of EV-maker Tesla have surged more than 370 percent in the 12-month period through June 10, are just today cracked $1,000 for the first time ever, a sign that investors may be betting heavily on the electrification of automobiles.

Oil isn’t the only fossil fuel that’s under threat from advancing renewable energy technology, of course. Coal use in the U.S. has been in decline for years now, and in 2019, electricity generated from renewable sources such as wind and solar surpassed coal for the first time in over 130 years, according to a May report by the U.S. Energy Information Administration (EIA). U.S. coal consumption fell for the sixth straight year to 11.3 quadrillion British thermal units (quads), the lowest level since 1964, while renewable energy consumption rose for the fourth straight year to record-high of 11.5 quads.

Even in the age of President Donald Trump, who favors fossil fuels such as coal, major renewable energy projects in the U.S. continue to move forward.

Industry leader Siemens Gamesa Renewable Energy, which currently controls about 68 percent of the U.S. wind market, just announced that it will be installing a vast offshore wind project off the coast of Virginia Beach. The so-called Dominion Energy Coastal Virginia Offshore Wind project, described as the “largest offshore wind project” in the U.S., will use the Spain-based company’s new SG 14-222 DD turbines, which feature blades measuring an incredible 108 meters (354 feet). 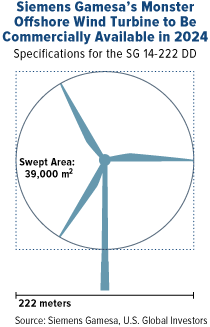 To give you some idea of how massive this machine is, the Statue of Liberty clocks in at 305 feet, meaning each blade is about 50 feet longer. Meanwhile, the turbine’s “swept area,” or the area in square meters of the rotor, is equivalent to approximately seven NFL football fields.

Although the exact number of turbines that will be installed off the coast of Virginia has not yet been revealed, it’s worth pointing out that each SG 14-222 DD turbine is able to generate enough electricity to power around 18,000 average households annually, according to Siemens.

The turbine is expected to be commercially available in 2024, and the Virginia Offshore project is slated to be completed by 2026.

We also happen to like Siemen’s main competitor, Vestas Wind Systems. The Denmark-based company, which controls about 12 percent of the U.S. market at the moment, has had strong sales growth in 2020 with a record-high order backlog, according to James Evans, renewables analyst at Bloomberg Intelligence. Besides healthy sales, a “growing service business adds stability to overall revenue,” Evans says.

Both Siemens Gamesa and Vestas were among the top 20 holdings in our Global Resources Fund (PSPFX).

With governments and companies around the world moving rapidly toward carbon neutrality, we believe renewable, clean energy stocks will benefit over the long-term. They’ve already pulled ahead of traditional fossil fuel companies, as you can see below. The S&P Global Clean Energy Index was up almost 45 percent for the two-year period through June 5, compared to the S&P Global Oil Index (negative 29 percent) and S&P 500 Energy Index (negative 35 percent). 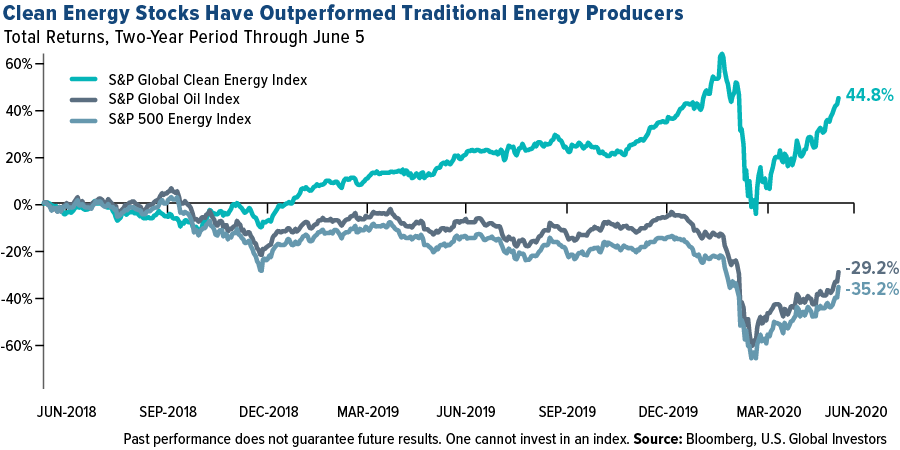 It’s for this reason that we maintain an overweight position in renewable energy stocks and underweight in oil exploration relative to PSPFX’s benchmark, the S&P Global Resources Index. The benchmark, in fact, has no exposure to wind, solar or other renewable energy sources.

We also like miners of metals that we expect will be in higher demand thanks to the electrification of energy production. Those metals include copper, nickel and lithium.