Why Gold Mining Stocks Could Be the Ultimate Contrarian Play

There’s more to the investment case than market timing.

Gold mining stocks appear very unloved at the moment. As measured by the NYSE Arca Gold Miners Index ( Chart  - $0.  (0%)  ), gold equities fell 18.5% year-to-date through the end of July, underperforming both the underlying metal and the S&P 500. From the index’s recent high set in August 2020, gold miners are off about 42.5%, putting them deep in bear territory.

When an asset class gets to be this overlooked by investors, I believe the time becomes ripe for contrarians to consider making a move.

There’s more to the investment case than market timing. Systemic risks abound right now that, in my view, could favor allocations to physical gold and gold mining stocks. Those risks include sustained inflation, a potential global recession, looming food and energy crisis, and an escalation of hostilities in Eastern Europe.

Reining in inflation alone will be no small task. The historic jump in consumer prices was likely years in the making due to unrestrained money-printing by central banks around the world, coupled with significant supply chain disruptions stemming from pandemic-related lockdowns. Besides aggressive rate hikes, austerity may need to be implemented to mute demand.

It’s worth pointing out that the last time we saw inflation this hot was in the early 1980s. This prompted similarly aggressive action by then-Federal Reserve Chair Paul Volcker, who raised rates to as high as 19%. Gold responded by soaring to $835 an ounce, or more than $3,000 in today’s dollars, an all-time high when adjusted for inflation. 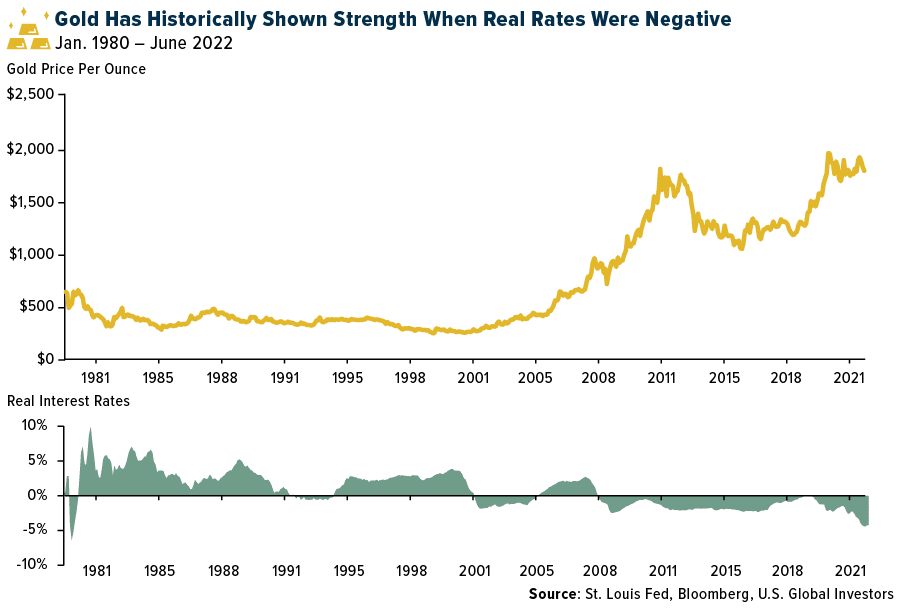 As I’ve shown you many times before, gold often shares an inverse relationship with real rates. When inflation-adjusted rates have turned negative, the precious metal has tended to trade up as investors dumped government bonds in favor of gold and other hard assets.

The reason I believe we haven’t seen gold rip to a new all-time high this year in light of systemic risks is the strong U.S. dollar compared to other world currencies. Like most other commodities, gold is priced in dollars, so when the value of the greenback is high, it has the effect of containing the metal’s price.

Year-to-date through the end of July, the only major currencies to have increased in value relative to the dollar are the Russian ruble and Brazilian real. Most currencies have decreased in value, with the Turkish lira having lost a little over a quarter of its value compared to the greenback.

Below are the results. While dollar-denominated gold has been stuck in a tight range, gold priced in the Turkish lira has exploded. Over the past three years through the end of July, the gold price in Turkey has increased fourfold and is currently trading near an all-time high, underlining the metal’s perceived role as a hedge against monetary debasement.

As for precious metal miners, I see them as an attractive opportunity right now. They’re trading at a huge discount compared to the broader equity market, and dividend yields are the highest they’ve been in nearly a decade.

What I believe could benefit miners is a potential pivot by Jerome Powell and the Fed. We’re currently in a tightening cycle, with another 50- to 75-basis point rate hike expected in September. But as soon as the central bank is convinced that inflation has come under control, policy may rapidly shift back to being accommodative to prevent an even deeper economic slowdown. For such a capital-intensive, highly leveraged industry as mining is, that would be welcome news.

To learn more about the drivers of the price of gold, and to request an investment kit, click here.