Global Wealth Destruction (And Then What?)

With rates rising fast and recession in the cards, you need a fighting game plan.

I’m going to show you a scary chart that plots the combined market capitalizations of the world’s stock markets.

You can see that since the Tech Bubble popped, we have been on an incredible global run. All thanks in large part to relatively loose monetary conditions and strong economic growth. 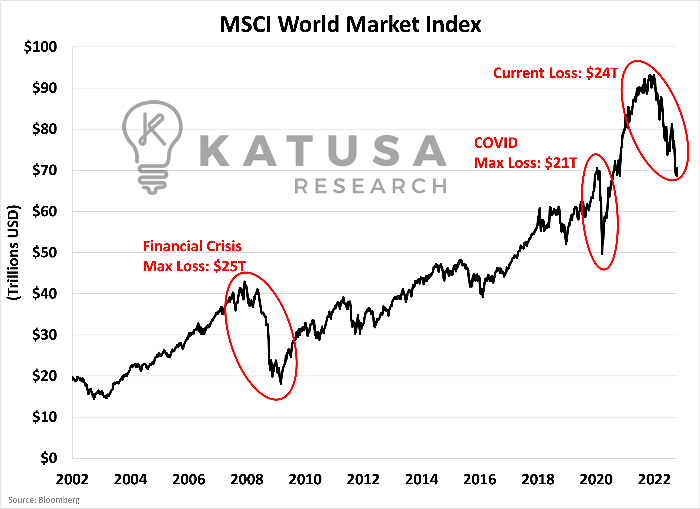 Markets have begun to forecast these tightening conditions and slower economic growth rates. And it’s leading to massive wealth destruction.

To match the Global Financial Crisis’s total percentage loss of 57% there could be another $30 Trillion lost.

That means we could only be 44% through this carnage using relative measures of the Global Financial Crisis.

To put this loss into perspective, money printed globally post-COVID pandemic has approached $19 trillion and in the developed world approximately $12 trillion.

This means that the economic losses – associated with stock market losses – have destroyed more than all the stimulus packages provided worldwide. The financial heroin has been used.

It’s not just the equity market that is feeling the effects. The U.S. bond market has been decimated and is facing the largest decline in 20+ years. At its peak, the combined market value of the U.S. Investment Grade and High Yield bond markets was 28 trillion. Over $3 trillion has been wiped out. 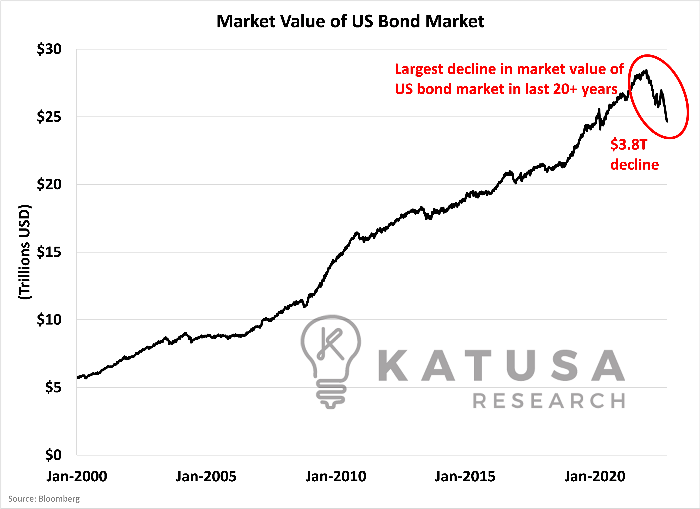 I don’t believe the spillover over effects from these huge losses has finished their full negative effects on the general population just yet. For example, if all bonds needed to be refinanced today at current rates, it would cost over $1 trillion more to do so.

When you add all these pieces together, you end up with one of the worst investment climates we have seen in modern history.

The average portfolio composed of 60% stocks and 40% bonds is facing its largest annual loss in 100 years.

Don’t believe me? The chart is below. You see that massive red bar? That’s this year. 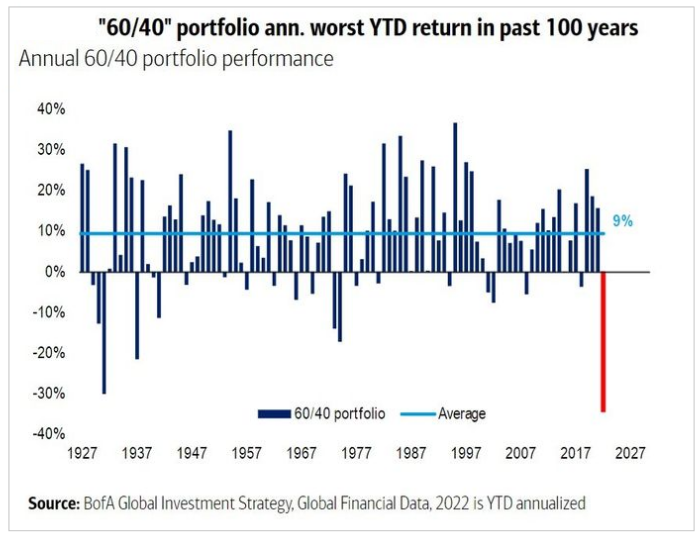 And as I outline to all my KRO subscribers in this month’s massive report, the market internals remains very weak.

A year and a half ago we wrote about the Rate Rise Era and painted a picture of what was coming.

Contrary to the mega-bulls, we started to take free rides in many portfolio positions to take initial capital off the table.

This is ultra-hard to do when everything is going gangbusters around you… Bitcoin highs, SPAC mania, meme stocks going to the moon (and back).

But even the forecast we posted was not aggressive enough for how the Fed acted given the massive increase in inflation.

When rates rise as fast as they are right now, the recession is in the cards. And you need to have a fighting game plan for it. 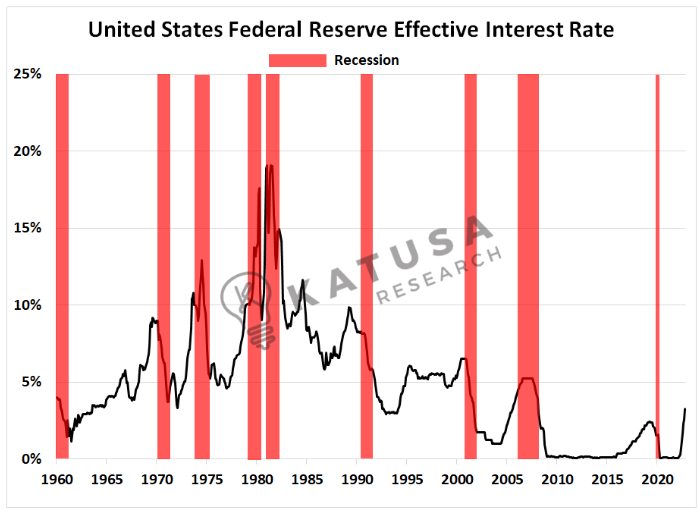 This is a historic handoff of power from the market-top buyers and cheap money addicts to the patient and prudent.

Don’t be left behind.

All Roads Lead to Washington D.C.

I wrote this before but will repeat it again… If history is anything like the past, most countries’ economies will not have the economic strength to absorb many interest rate increases.

The Fed is the most powerful decision-maker in the world. Fight it at your own peril.

But if you follow the moves they’re making as close as I am, you can set your portfolio up for success.

In today’s world capital is very mobile and moves rapidly across different asset classes around the globe.

Investors are always looking for the highest return on their capital in emerging sectors from carbon to uranium.

Nations with higher interest rates and strong economies attract investor capital, which in turn increases demand for the currency.

Nations who cannot raise rates or see their economies falter in the face of these interest rate increases will ultimately see their currencies decline in value versus those who have strong economies and currencies.

This ultimately leads to a stronger U.S. dollar.

And the world will look to the dollar and the US equity market.