LONDON (Reuters) – Having initially brushed off the potential impact from coronavirus-linked claims, global insurers are waking up to the prospect of a double whammy – a sharp rise in payouts at a time of big investment losses.

Because epidemics are excluded from many business insurance policies, the early prognosis was for a low levels of claims. But as recession threatens the global economy along with rising insolvencies, all sorts of companies with trade credit insurance, from airlines to retailers are coming under strain.

They manage more than $20 trillion in assets globally but their big government bond holdings are becoming problematic as the threat of recession grows and central banks’ interest rate cuts have sent yields plunging.

The $11 billion trade credit insurance market covers the risk that a company’s customers cannot pay for goods or services bought on credit. There was already a rising trend in 2019 in big corporate insolvencies, according to figures from insurer Euler Hermes at the end of the year.

Moody’s expects rising claims to hit three of the world’s biggest trade credit insurers Atradius, Coface and Euler Hermes. The ratings agency cited data from Atradius and Coface showing that for each, nearly 15% of their total net potential exposure is in Asia and Australia, two of the worst hit regions.

The insurers declined to comment, but Atradius said recently it expected corporate insolvencies to grow 2.4% globally in 2020, “largely resulting from the coronavirus outbreak”.

The stress could spiral as governments lock down regions or whole countries and if major events such as the Olympics are postponed.

“It’s not a good time for anyone in the credit world,” said Jeremy Shallow, head of specialty at insurer Argo Global.

He added that a possible recession was factored into the firm’s underwriting of trade credit insurance.

The coronavirus outbreak is likely to have a bigger effect on the world economy than the outbreak of Severe Acute Respiratory Syndrome (SARS) some 20 years ago, European Central Bank governing council member Klaas Knot said last month, adding that SARS wiped $40 billion off world equity markets.

The prospect of a global recession was reflected in an index of European insurance shares which has tumbled to 3-1/2-year lows, losing 30% from peaks hit on Feb 19 before concern about the potential of the deadly virus took hold. 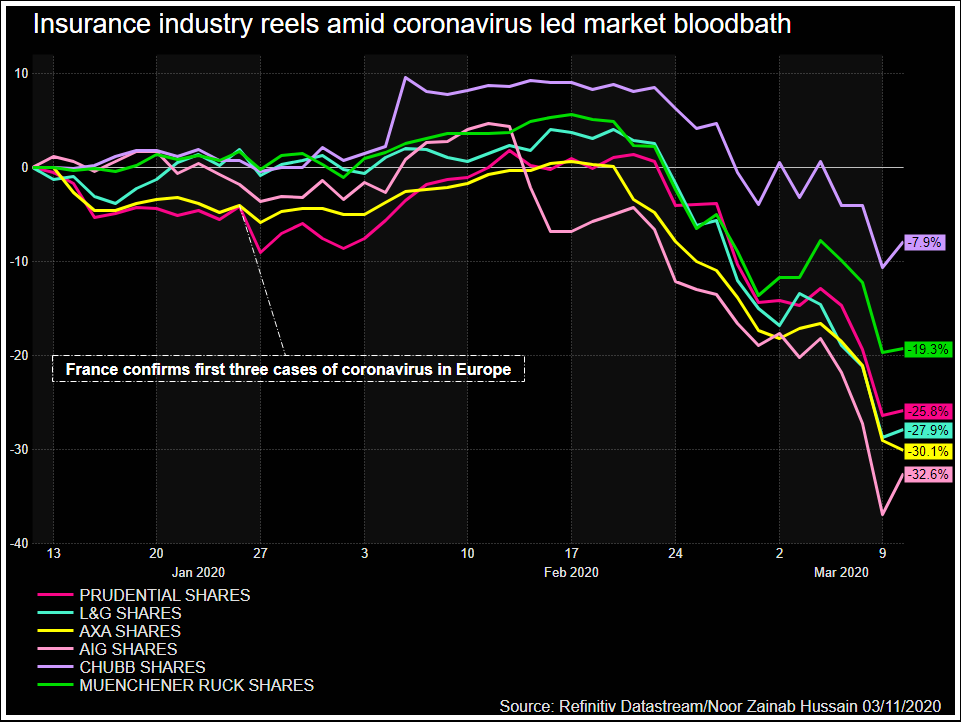 NO FUN OR GAMES AS EVENTS AXED

Trade credit insurers would be most cautious about sectors such as travel and entertainment, according to Bernie de Haldevang, head of credit, political risk and crisis management at Lloyd’s of London insurer Canopius.

Airlines have suffered badly with Norwegian Air laying off staff and cutting thousands of flights and Britain’s Flybe forced to throw in the towel. Hotel groups such as Hyatt, cruise operators like Carnival Corp and holiday companies including TUI will also see their cash flow crushed.

Travel restrictions to countries such as Italy and Israel will lead to further insurance payouts, while the cancellation of major events like the South by Southwest music and film festival in Texas will add to claims.

Analysts at Barclays warned last week that coronavirus losses for Munich Re were “potentially more material than we thought” after the global reinsurer flagged a 500 million-euro exposure if all the major events it covered this year were cancelled. 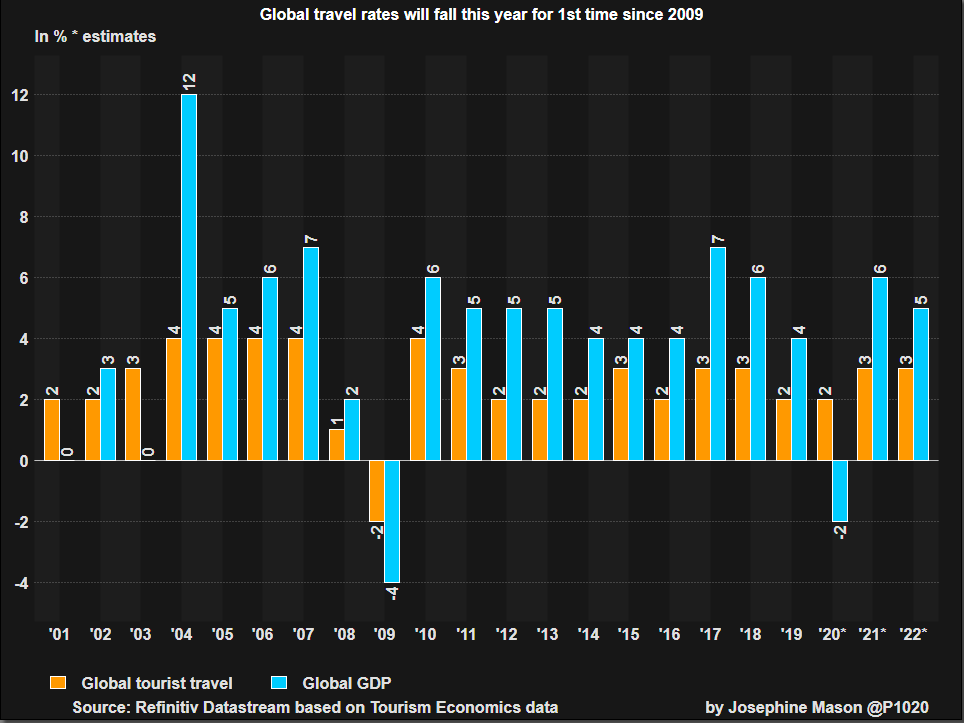 Meanwhile, the investments insurers rely on to pay the claims are unraveling.

U.S. 10-year bond yields have more than halved since the end of 2019. At least half of insurers’ $20 trillion in assets under management will be invested in government bonds, analysts say.

Years of rock-bottom bond yields persuaded insurers to foray into riskier corporate debt – U.S. life insurers had more than 34% of their portfolios in triple-B rated debt in 2018, according to insurance ratings agency AM Best, one level away from being rated “junk”.

Yields on this kind of debt have ballooned as default worries grow.

Increased equity exposure adds to vulnerability — since the sell-off started in earnest on Feb 19, some $11 trillion has been wiped off global stocks’ value, according to Refinitiv Datastream.

Legal & General and M&G are among insurers which have highlighted the dent to solvency ratios.

“The market moves already seen are giving insurers a lot to think about – in particular how their market risk models are coping with the current market stress,” said Colin Tipping, head of insurance investment management – international region at Mercer.

Insurers are generally long-term investors who do not make hasty investment decisions but the next few weeks will be a nail-biting ride.

“If the economic situation deteriorates, they will no doubt be reassessing their portfolios and exposures,” said Ferdia Byrne, insurance partner at KPMG. 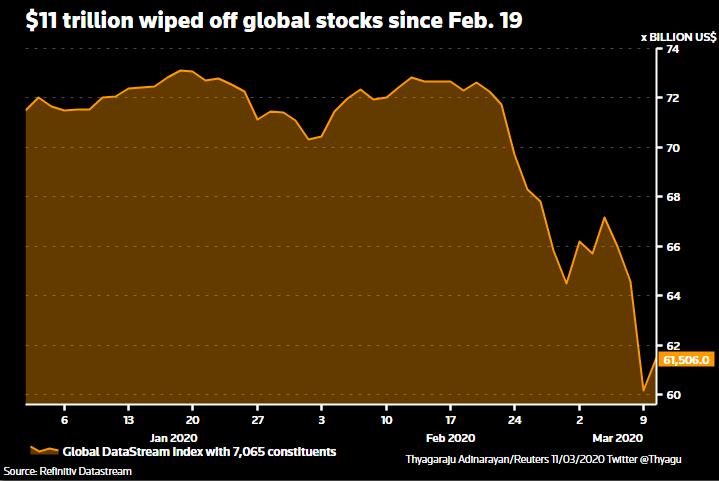