Get Into Stocks Right Now?

There is a tremendous amount of herding going on in the market, which is good until something goes wrong and everyone is looking to exit at the same time.

Michelle Fox of CNBC reports, ‘Outright bullish’ on the market, money manager says to get into stocks ‘right now’:

With the stock market about to leave the summer behind, now is the time to buy, according to Jerry Castellini, president and chief investment officer of CastleArk Management.

In fact, he told CNBC on Thursday the market can move up 10 percent just to get back to “fuller valuation.”

He said market watchers have been focusing on the wrong things, such as emerging market weakness, politics and earnings that some worry may have reached their peak.

However, Castellini said the global economy is poised to turn.

“The consumption around the globe is now following all the liquidity that the central banks have provided these economies. And you’re likely to see a continuing higher and higher expectation now for earnings kind of play out,” Castellini said.

“That’s what drives markets higher. And that’s a surge that we still haven’t seen the greatest part of, and you really want to be in front of that,” he added. “You probably want to get in right now, and you want to get in before the [Labor Day] holiday.”

Earlier Thursday, President Donald Trump took a victory lap on the recent market rally, tweeting about financial market news being “better than anticipated.” He also promised “more good news is coming” for those who have “made a fortune” in markets.

Donald J. Trump?@realDonaldTrump
The news from the Financial Markets is even better than anticipated. For all of you that have made a fortune in the markets, or seen your 401k’s rise beyond your wildest expectations, more good news is coming!
4:20 AM – Aug 30, 2018

However, on Thursday, U.S. stocks snapped a four-day winning streak after a report said Trump would support moving head with additional tariffs against China.

“We’re up about 8 percent since June,” he told “Power Lunch.”

Instead, he said, he will wait until after people come back from vacation and “see where the market wants to go.”

When it comes to the global economy, Pavlik said the rest of the world isn’t in the same type of situation as the United States. While the U.S. is in a great position to negotiate tariffs, other nations aren’t ready to handle interest rate increases, he explained.

He said the S&P 500 could trade as high as 3040, but if gets past that mark he thinks there may be a “bit” of a pullback on concerns over the midterm elections.

“As we go into next year, there’s going to be a little bit more concern about maybe some changes in Congress, about maybe a slowdown in earnings pace, maybe the Federal Reserve, less repatriated cash to come back from overseas and fuel buybacks,” Pavlik said.

He ultimately sees a market gain in the range of 7.5 percent this year and another 5.25 to 5.5 percent next year.

Last week, I discussed riding the bull market to nirvana where I showed you most of the gains in US stocks this year are coming from two growth sectors, consumer discretionary and technology , both of which have been on fire since early 2016.

And most of that growth is coming from one powerhouse tech giant, Amazon , up 70% year-to-date and 40% since early April after the last dip (click on image): 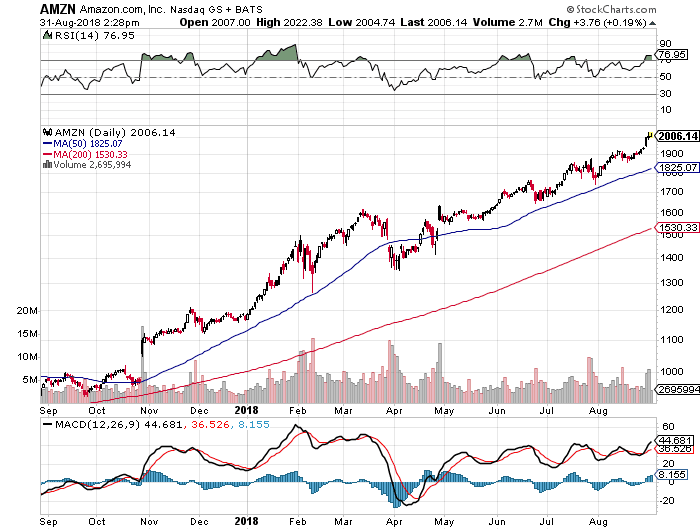 Amazon is on fire and you have a parade of analysts on CNBC telling you they’re executing on all fronts especially in the all-important Amazon Web Services (AWS) which is recurring business.

What CNBC doesn’t tell you is every single hedge fund is long Amazon shares and so are mutual funds, pension funds and other institutional and retail investors. So there is a tremendous amount of herding going on here which is good until something goes wrong and everyone is looking to exit at the same time.

But growth stocks are where institutional investors hide when Risk-Off markets dominate. So, from that perspective, it shouldn’t surprise us growth stocks are doing extremely well, that’s where earnings growth is most impressive.

In fact, the divergence between growth versus value stocks has reached an extreme, something which has many value investors upset thinking a mean reversal is inevitable: 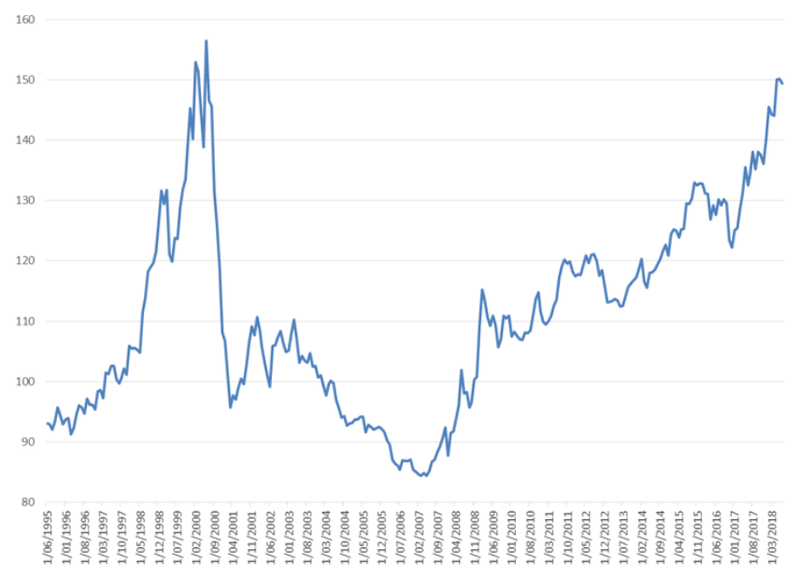 I would be careful, however, and not base any investment decision on mean reversion.

In an email to clients today, Cornerstone Macro‘s Michael Kantrowitz discusses why growth will continue dominating value, stating: “We’ve been making the case for Growth investing for several years now and do not see an end in sight of it’s dominance over value.”

Michael examines how the composition of growth and value indexes has changed since 2000 (click on image): 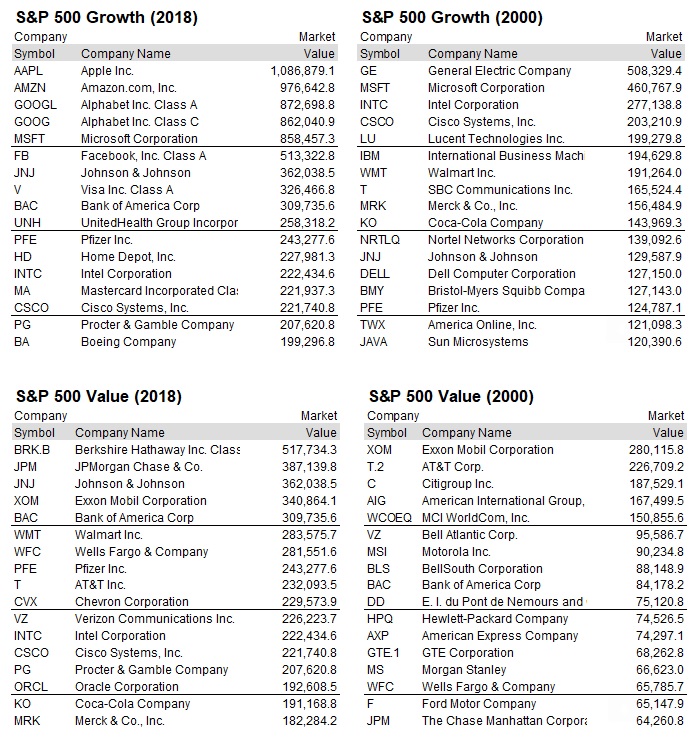 I wonder what the relative price chart of an iPhone versus a Palm Pilot looks like today?

There are many “cheap” Value companies today (these are the lower-quality companies) that survived due to post-2008 global fiscal and monetary stimulus. They are now MOST at risk of a central bank tightening cycle and another reason why I think Growth continues to be a better investment than value. 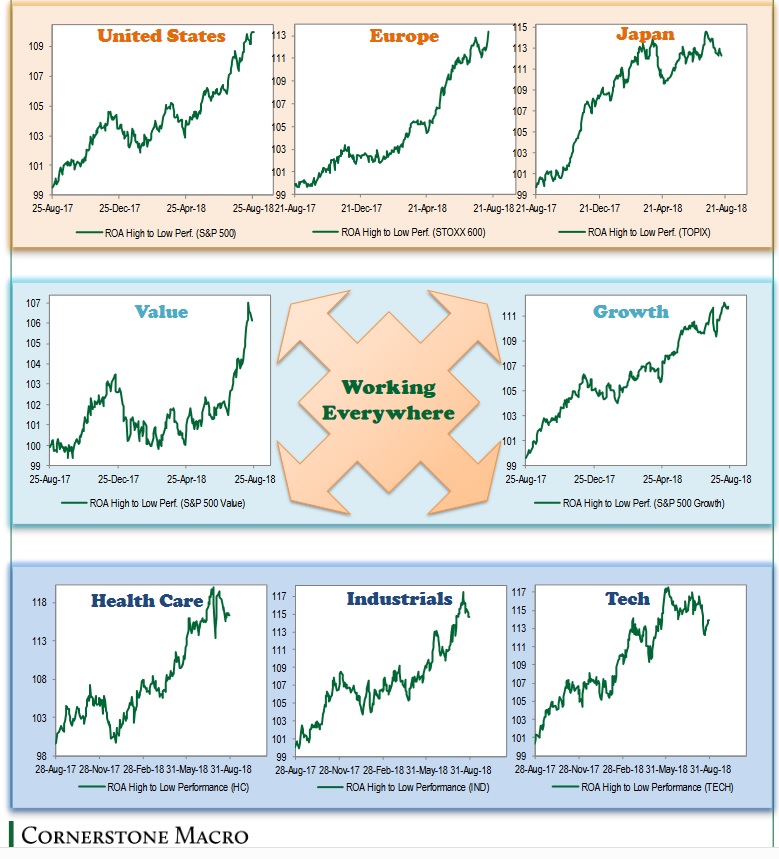 Francois also demonstrates how the rise in rates has caught up to leading economic indicators and financial markets and signals slower growth ahead in the US and around the world (click on image): 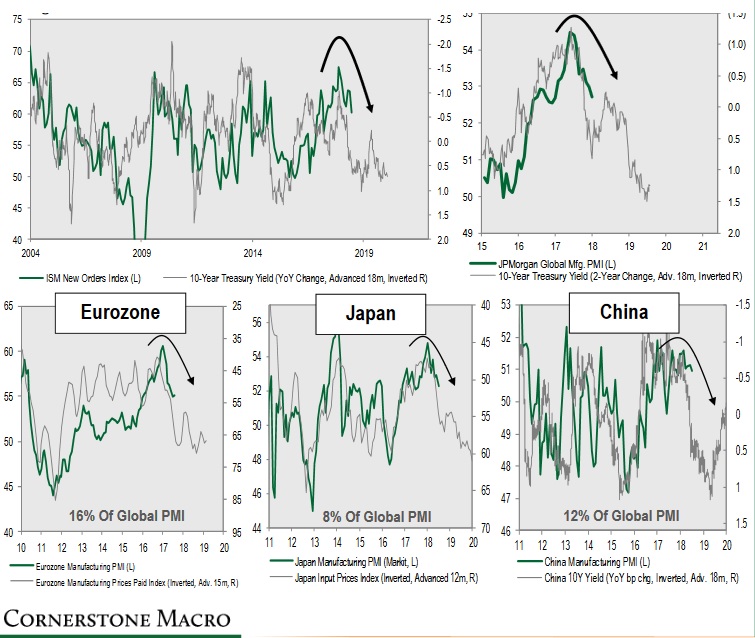 Slower growth ahead is bullish for US long bonds as it suggests inflation pressures will be transitory: 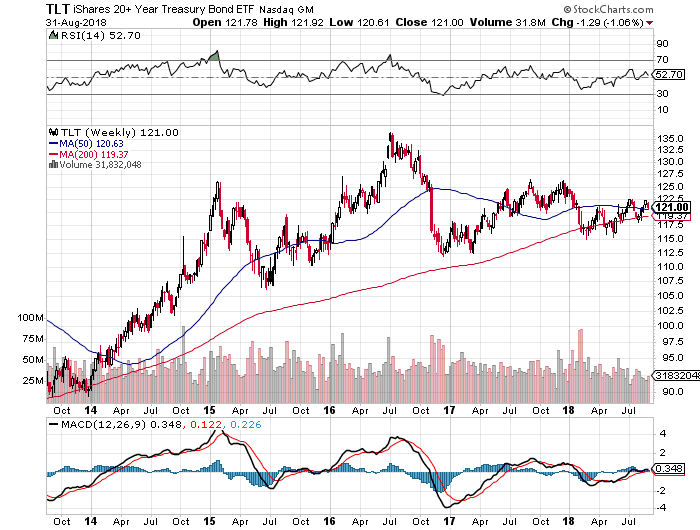 Admittedly, US long bonds haven’t done much this year but if the global economy is slowing, which I believe it is based on global PMIs rolling over, then you need long bonds in your portfolio to cushion the blow.

What else? A slowing global economy will support defensive sectors that offer stable profits. I’ve been warning my readers since mid-July that it’s time to get defensive, focusing on defensive sectors like healthcare , utilities , consumer staples , REITs and telecoms . And I would hedge that stock exposure with good old US long bonds .

All this to say, never mind what Jerry Castellini and all the cheerleaders on CNBC telling you to load up on stocks now, you need to be selective and defensive heading into year-end.

As I explained last week, mutual funds end their fiscal year at the end of September, so we might get a decent pop in markets in the next few weeks as they all shed their losers to buy market leaders, but after that, watch out, things can get very rocky, very quickly.