Georgia Could See Two Runoff Elections To Shape the Next Senate

Georgia could be the site of two runoff elections in January if David Perdue doesn't get an outright majority. 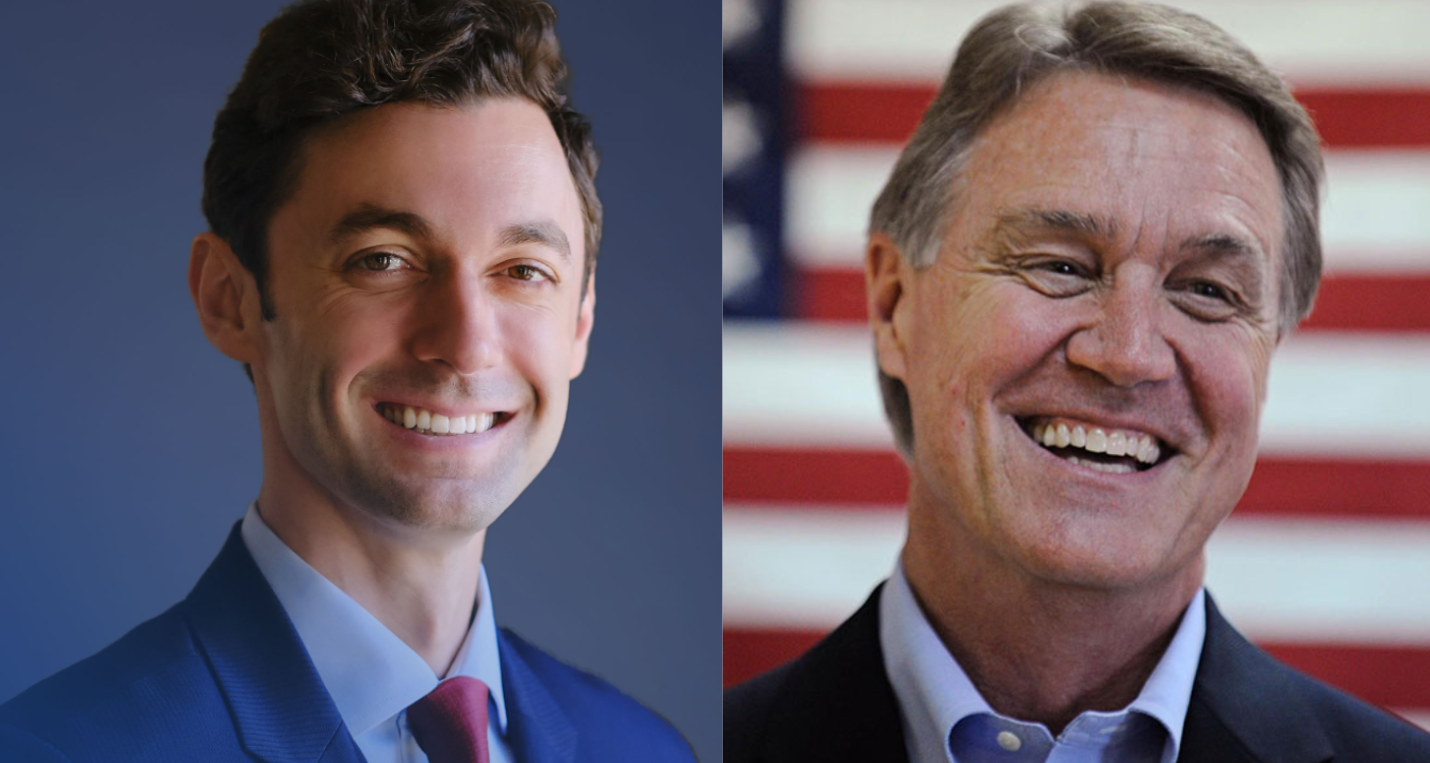 Image: Jon Ossoff and David Perdue, who would face each other in a runoff on Jan. 5, 2021, if Perdue doesn't get an outright majority in their race.

ATLANTA (AP) — The outcome in several contested states will determine whether Joe Biden defeats President Donald Trump. But if the Democratic challenger wins, the ambitions of a Biden presidency could well come down to Georgia.

Georgia, long a Republican stronghold — but one with rapidly changing demographics — could be the site of two runoffs on Jan. 5 to settle which party would control the Senate.

Should Democrats win them, Biden would be dealing with a majority in the Senate, increasing his chances for passing legislation and securing major appointment confirmations. Otherwise, Senate Majority Leader Mitch McConnell, a Kentucky Republican, could wield the power to block Biden.

Other races in North Carolina and Alaska also hold the potential to reshape the balance of power, but Georgia offers the more likely prospect.

In Georgia, two runoff elections would mean a campaign on an almost national scale, with tens of millions of dollars spent by both sides.

Biden has been mum on the Senate balance as he awaits the results in his own election, but he offered a preview days before Tuesday’s election.

“I can’t tell you how important it is that we flip the United States Senate. There’s no state more consequential than Georgia in that fight,” Biden declared at an Atlanta rally on Oct. 27, when he campaigned alongside Democratic Senate hopefuls Jon Ossoff and Raphael Warnock.

Votes were still being counted to determine whether Ossoff will meet Georgia Sen. David Perdue in a second round. Georgia law requires an outright majority to win a statewide office.

Separately, a Georgia special election to fill the unexpired term of former Sen. Johnny Isakson will require a runoff between Warnock and Sen. Kelly Loeffler, the Republican appointed to the post last year after Isakson retired.

Nationally, the Senate stands at 48-48. But Republicans lead uncalled races in Alaska and North Carolina. By Thursday, the focus turned to Georgia.

Both sides promised unlimited funds would flow to the campaigns and onto the airwaves, and they predicted an all-star cast of campaigners for a state that in recent weeks drew visits from Biden, Trump, Vice President Mike Pence, Democratic vice presidential nominee Kamala Harris and former President Barack Obama.

Sen. Chris Van Hollen, a Maryland Democrat who led Senate Democrats’ campaign efforts in the 2018 cycle, warned that McConnell, who has gleefully dubbed himself the “grim reaper” of the Democratic agenda, would threaten a Biden presidency if he returns as majority leader.

“His DNA has been all about obstruction and very little about constructive progress together,” Van Hollen said.

Progressives, meanwhile, lament losses in Senate races that could have given Democrats a majority with a cushion. Adam Green, co-founder of the Progressive Change Campaign Committee, tried Thursday to downplay the pitfalls of GOP control, arguing that “bold executive branch actions that impact people’s lives” still could “define Biden’s legacy.”

Republicans countered with warnings of an “extremist” government if Democrats, who appear positioned to keep the House majority despite losing seats, control both ends of Pennsylvania Avenue.

“David Perdue won this race in regular time and will do the same in overtime,” said Kevin McLaughlin, executive director of the Senate Republicans’ campaign arm, blasting Ossoff as a front man for “national Democrats and their shared dream of a socialist America.”

Missouri Sen. Josh Hawley, a potential 2024 presidential candidate, was harsher. “We are in danger of losing the Senate to extremist liberals who want to raise your taxes, defund the police and pass legislation for a sweeping government takeover,” Hawley wrote in a fundraising pitch for Loeffler.

Biden’s tax plan proposes increases only on corporations and the wealthiest Americans. Neither Ossoff nor Warnock proposes “defunding the police.” And Hawley’s fundraising email didn’t explain what Democrats’ “takeover” would be. But his assertions track the fault lines that will define the runoff campaigns.

In Georgia, Republicans and Democrats embraced the national frame, even as they talked up their candidates’ individual attributes. Loeffler is Georgia’s first female senator in the modern era. Warnock, pastor of the church where civil rights icon Martin Luther King Jr. preached, would be Georgia’s first elected Black senator.

“These are compelling candidates … but I think they have to accept it for what it is: a Democrats-versus-Republican race that’s all about the setup and authority in the Senate,” said Jack Kingston, a former congressman who narrowly lost a GOP Senate runoff to Perdue in 2014.

State Democratic Chair Nikema Williams, just elected to succeed the late Rep. John Lewis in Congress, said it’s impossible to separate Senate control from issues that matter to voters on the ground. “That national conversation has implications for every Georgian,” she said, noting that McConnell has blocked Democratic bills to expand the Voting Rights Act and send aid to state and local governments hammered by the pandemic and would do the same on health care and other Biden initiatives.

“I can’t wait to have that discussion,” Williams said.

Williams further celebrated the attention as confirmation of Georgia’s battleground status. Trump won the state by 5 percentage points in 2016, and Democrats have lost nearly every statewide contest for two decades.

For Ossoff, it’s a bookend to the start of Trump’s tenure, when he ran for a suburban Atlanta House seat that became the most expensive congressional race in U.S. history to that point. He lost. Warnock, meanwhile, is making his first bid for public office.

“I’m staying focused,” Warnock then says into the camera. “And by the way, I love puppies.”