GBP/USD has been stabilizing after suffering significant falls earlier. Fears of a hard Brexit and the Fed decision are eyed. Wednesday's technical chart is mixed for GBP/USD.

Sterling has found some stability – but Boris Johnson’s blame game may send it lower. The PM – hardly one week in office – has said that he was not aiming for a no-deal Brexit but added that it is “very much up to our friends and partners across the Channel.” Johnson – who previously refused to meet his European peers unless they agree to reopen the deal – stressed that parliament has “thrown out the [Irish] backstop three times” and that it must be removed from the Withdrawal Agreement.

GBP/USD has stabilized in the mid-1.2100s but has been unable to recapture over 200 pips that it shed early in the week. The recent rise off the lows is a classic “dead cat bounce” pattern – even a dead cat bounces when it falls to the ground – but fails to go very far. Another significant sell-off may be in the cards.

Markets are currently pricing in a growing chance of a no-deal Brexit. The EU refuses to budge. The latest to comment was Irish PM Leo Varadkar that repeated that the EU is united in its view that the backstop cannot be scrapped.

Johnson completes his tour of the UK’s four nations with a visit to Northern Ireland. Comments about the backstop and the Good Friday agreement that has maintained the peace in the province will be closely watched. Reports suggest that US politicians in both political parties have vowed to block any US-UK post-Brexit trade deal if the PM “messes” with the historical accord.

Johnson, as his predecessor Theresa May, wants the UK to be able to strike independent trade deals and thus leave the EU’s customs union. However, the mounting new customs checkpoints between Northern Ireland and the Republic of Ireland – part of the EU – would undermine the peace deal. The circle is hard to square.

The focus will later shift to the US and the all-important rate cut expected by the Federal Reserve.– the first since the financial crisis in 2008. A rate reduction is fully priced in but investors are split on the next moves by the Fed. If Chair Jerome Powell frames the move as cautionary or as an “insurance cut” but stresses the strengths of the economy, the dollar may rise. If he opens the door to further cuts later this year, the greenback may fall.

Overall, the Brexit clash and the Fed decision will likely be the most significant market movers today. 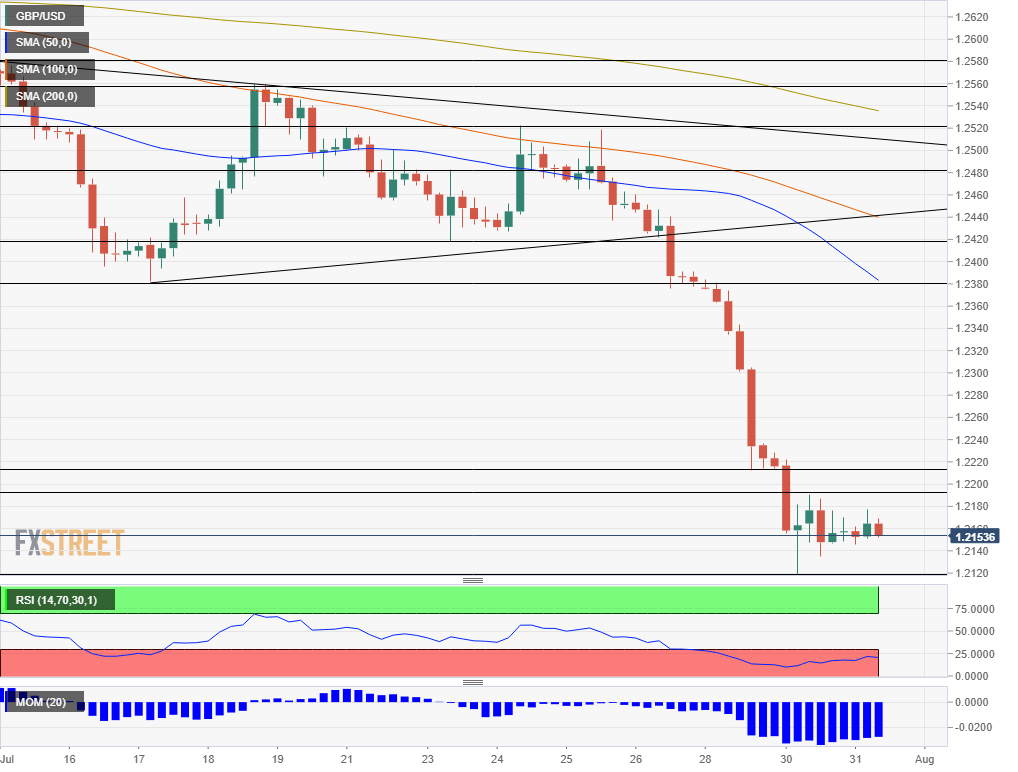 We return to the four-hour chart after the recent stabilization and see that the Relative Strength Index (RSI) remains below 30 – indicating oversold conditions and potential for a rebound. However, momentum remains to the downside.

Some resistance awaits at 1.2190 which capped the pair on Tuesday and 1.2210 which provided short-lived support on Monday. The next noteworthy line is only at 1.2380.