GBP/USD: Carney and Powell may pound the pound

GBP/USD has been recovering as the US dollar takes a breather and UK GDP figures. Brexit speculation, central bankers, and coronavirus headlines are set to dominate trading.

Christmas came right on time – an upswing in exports in December saved the UK economy from contracting in the fourth quarter. Together with revisions that pushed yearly growth to 1.1%, GBP/USD has been able to move higher.

However, the economy is far from being out of the woods. Manufacturing production rose by only 0.3% monthly and dropped by 2.5% yearly in December – worse than expected. Investors seem confident that Britain’s stagnation during the last three months of 2019 was related to Brexit uncertainty and that upbeat confidence after the elections will lead to a return to growth.

Cable has also benefited from a slide in the US dollar. The greenback has been giving ground amid receding fears from the coronavirus outbreak. While the number of deaths topped 1,000, the pace of new infections has decelerated. Moreover, China is broadly back to work after extended holidays. Will money continues flowing out of safe havens? This remains unclear as fears of quick-spreading have risen after several new cases in Britain and France.

Brexit may return biting as well. Both the UK and the EU have toughened their stances ahead of March’s official talks about future relations. UK Chancellor of the Exchequer Sajid Javid has stated that he wants to break free from EU regulations while maintaining equivalence status for London’s financial services industry – and Brussels rejects this. Further adverse headlines may weigh on the pound.

Mark Carney, the outgoing Governor of the Bank of England, may comment on GDP figures, the economy at large, and also financial regulation when he faces a committee at the House of Lords. While Carney may speak more freely as he nears the exit, the next BOE decision rests with his successor Andrew Bailey.

Another central banker may have more sway on pound/dollar. Jerome Powell, Chairman of the Federal Reserve, testifies on Capitol Hill. He may open the door to cutting rates later this year amid the coronavirus outbreak or weak inflation. The Fed’s stance has been that the economy is doing well and current borrowing costs – slashed three times in 2019 – are appropriate.

Overall, GBP/USD traders have their hands full with market-moving developments. 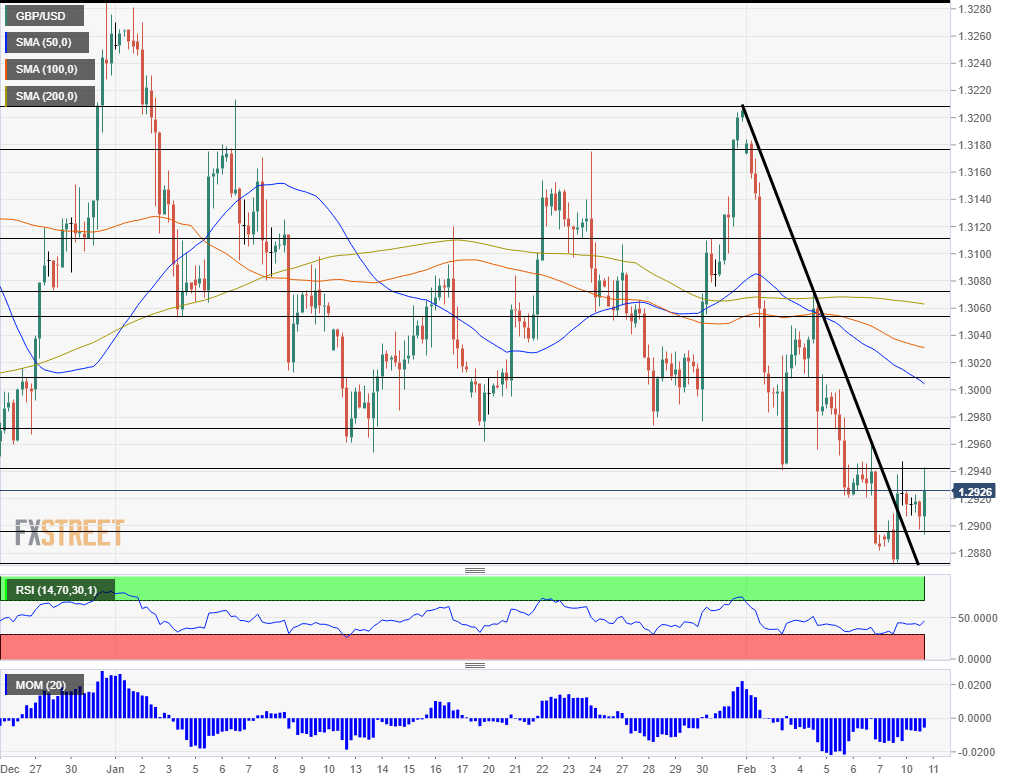 Pound/dollar has broken above the steep downtrend resistance line – but that does not guarantee swift recovery. Momentum remains to the downside and the pair continues trading below the 50, 100, and 200 Simple Moving Averages. Moreover, the Relative Strength Index is above 30 – far from oversold conditions.

Overall, bears are in the lead.

Resistance awaits at 1.2940, which is the daily high and a low point in early February. Next, we find 1.2975, a support line from late January, and 1.3010, which played a role in both directions recently.