A number of trend lines right now—from manufacturing PMI to FDI to the inverted yield curve—point to imminent risks, including a potential economic recession. 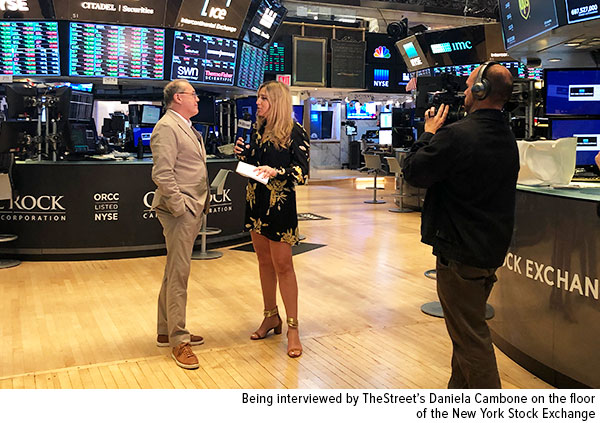 Last week was quite eventful! I was honored to speak alongside some of the best and brightest in the investment industry at the Oxford Club’s Private Wealth Seminar held in New York City. I enjoyed hearing from all the speakers at this year’s event, especially Alexander Green, chief investment strategist at The Oxford Club.

Alex spoke to a theme I think most investors can relate to—the importance of remaining positive and looking past the gloom-and-doom headlines that often weigh on the market. I’m a firm believer that your thoughts manifest your future. It’s very hard to make money and be successful when you’re always expecting the worst to happen.

“Follow the trend lines, not the headlines,” President Bill Clinton once said. I’m a news junkie myself, but I guarantee you I wouldn’t be where I am today had I based every one of my investment decisions on what the talking heads tell me.

Alex recommended a few positive books that I plan on picking up at some point. Among them are Steven Pinker’s Enlightenment Now, Matt Ridley’s Rational Optimist and Peter Diamandis’ Abundance. All three books, in their own ways, take on the popular misconception that our lives are progressively getting worse. The headlines might make it feel this way sometimes, but the trend lines tell a different story. We’re living longer, healthier and freer lives than we were in years past.

Don’t believe me? Take a look at the chart below, courtesy of research website Our World in Data. It shows that an increasingly smaller percentage of people are now living in extreme poverty compared to earlier times. As recently as 1820, a vast majority of people—close to 90 percent—were living on less than 1.90 international dollars a day. Comfort and abundance were the rare exception, not the rule. Today, thanks to industrialization and liberalization, millions upon millions of people have been lifted out of poverty.

“Unfortunately, the media is overly obsessed with reporting single events and with things that go wrong, and does not nearly pay enough attention to the slow developments that reshape our world,” writes economist Max Roser, founder and editor of Our World in Data.

My last day in New York was well spent at the New York Stock Exchange (NYSE), where I was able to speak to a group of media and investment advisors about the world of gold. The yellow metal has been trading above $1,400 for more than a month now as bond yields around the world continue to plumb new all-time lows. As much as $13.64 trillion, equal to 25 percent of all sovereign and corporate bonds, currently have negative yields, meaning investors are paying the issuers for the pleasure of holding their debt.

Last week, in fact, German Bunds touched new record lows on manufacturing weakness due to global headwinds such as trade tensions and Brexit. The 10-year Bund yield dropped to minus 0.43 percent on Thursday, while the 20-year Bund fell below zero.

The Bund rally was sparked by the release of factory data that shows that Germany’s manufacturing sector contracted at a faster pace in July. The country’s preliminary purchasing managers’ index (PMI) hit 43.1, down sharply from 45.0 in June and a seven-year low. Output slipped to 44.1, its steepest decline since 2009.

A rate cut is also widely expected by the Federal Reserve this week, following similarly disappointing manufacturing and economic news. The U.S. economy slowed in the second quarter, falling to 2.1 percent from 3.1 percent in the previous three-month period. Meanwhile, the U.S. flash PMI sunk to a neutral 50.0, a 118-month low, on lower production volumes, a drop in employment and reduced stocks of purchases. A reading of 50.0 means factories neither expanded nor contracted.

The economy “started the third quarter on a disappointingly soft footing,” commented Chris Williamson, chief business economist at IHS Markit. “Manufacturers are shedding workers at the fastest rate since 2009 and service sector job creation is now down to its lowest since April 2017.”

A lot of the slowdown, of course, stems from the very disruptive U.S.-China trade war. Tensions between the two economies have hit supply chains and are affecting nearly every part of the economy, from technology to agriculture to real estate. And last week, economic research firm Rhodium Group released data showing that Chinese foreign direct investment (FDI) in the U.S. has plummeted an incredible 90 percent since President Donald Trump took office. From its peak of $46.5 billion in 2016, Chinese FDI shrank to only $5.4 billion last year.

Again, this is being felt in all corners of the economy. The Wall Street Journal reports that foreign buying of U.S. residences has dropped a record 50 percent in the past two years, from $153 billion to almost $78 billion, the smallest amount since 2013. The pullback, according to the WSJ, is driving price cuts in coastal cities such as New York, Miami and cities in California, and causing new condos to sit empty. 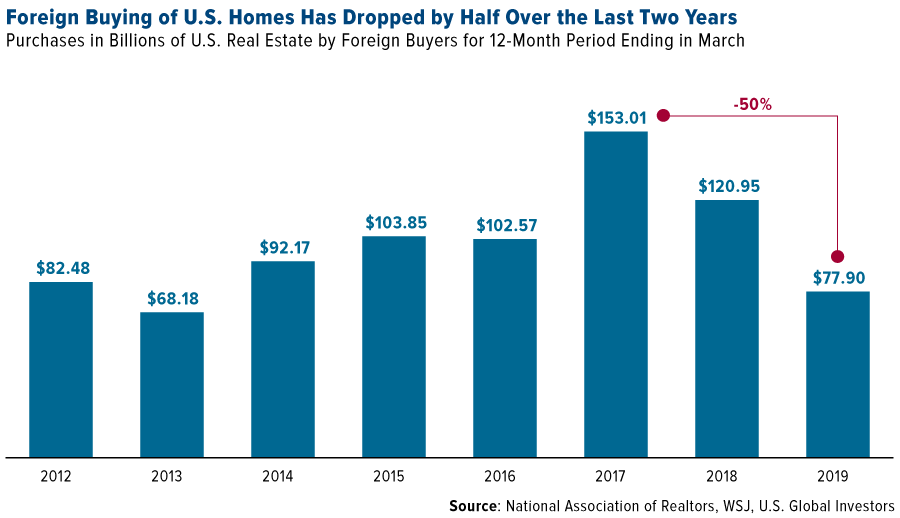 “Generally speaking, we are in the largest market correction since the Great Recession in New York City,” said Martin Eiden, a New York-based realtor. “The foreign buyers have pretty much all but disappeared.”

Going back to the beginning of my comments, it’s important to stay positive, but it’s just as important to be prepared. A number of trend lines right now—from manufacturing PMI to FDI to the inverted yield curve—point to imminent risks, including a potential economic recession.

One of the ways some big-name money managers are hedging against these risks is with gold. Billionaire investor Paul Tudor Jones told Bloomberg last month that gold was his favorite trade in the next 12 to 24 months as recession fears loom. Ray Dalio, founder of Bridgewater Associates and the most successful hedge fund manager ever, recommended gold in a LinkedIn post earlier in the month, saying that the metal could help investors have a “better balanced portfolio to reduce risk.”

It’s also important to get exposure with high-quality gold stocks. Bridgewater, for instance, holds significant positions in gold across all tiers in the industry, from senior miners to junior miners to royalty and streaming companies (Franco-Nevada, Wheaton Precious Metals and Royal Gold).

What’s good for the goose…