Fed to the Rescue

Since 2009, every time, stocks fell, the Fed would adopt a dovish stance and then stocks would rally. This time could be different but until that relationship ends, it should be respected.

Stocks rallied sharply last week after the Federal Reserve did a 180 and stepped in to give the market a well-timed boost. The Fed stepped in right before the Nasdaq and Russell 2000 were about to fall into a bear market. Remember, a bear market is defined by a decline of 20% or more from a recent high. The Nasdaq and Russell 2000 were both down over 16%, so the timing of the Fed changing their stance is not a mistake. It is also important to note, the Fed pays close attention to the stock market and the stock market reacts to the Fed. At least that has been the relationship for a very long time. 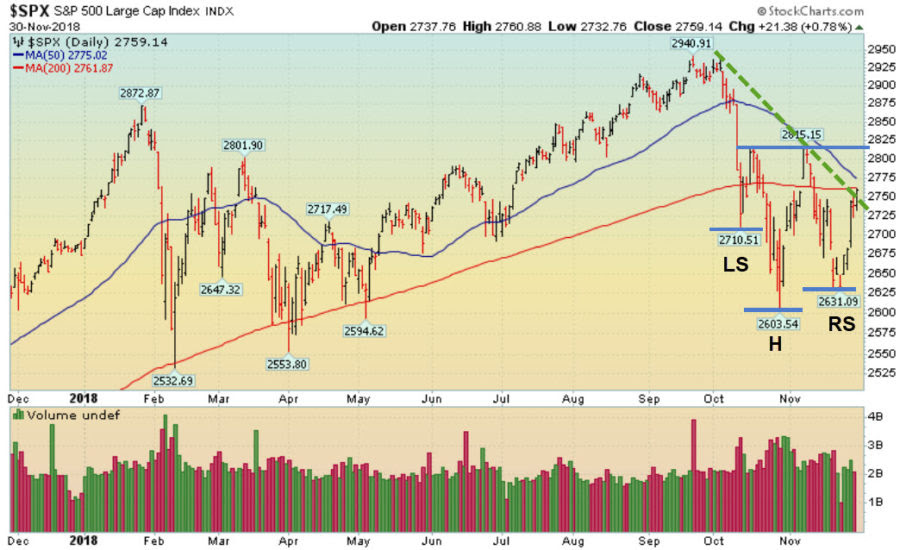 Since 2009, every time stocks fell, the Fed would adopt a dovish stance and then stocks would rally. This time could be different but until that relationship ends, it should be respected. Now, if that relationship changes, and stocks fall after this announcement, then that would be a very important paradigm shift and that would likely pave the way for a bear market.

That said, we have the G-20 meeting this weekend which could easily impact stocks going into year-end. I highly doubt it will be a negative outcome considering how lousy this year has been for global equity markets. Finally, we are entering a seasonably strong period for stocks, so barring some large sell-off the market has an upward bias over the next few weeks.

Stocks rallied sharply on Monday as they bounce from deeply oversold levels. General Motors said they will slash its salaried workforce by 15%, a more drastic cost-cutting plan than investors had expected. The stock was up nearly 5% on the news. Separately, oil and tech stocks rallied from deeply oversold conditions. On Tuesday, opened lower but reversed and turned positive after the White House said talks were being held on “all levels” between the US and China before Trump and Xi meet.

Technically, the market is deeply oversold and is trying to bounce as it pauses to digest the recent (and steep) sell-off. Stocks rallied nicely on Wednesday as the “bounce” continued. The Fed came out in the morning and warned that a ‘particularly large’ plunge in market prices is possible if risks materialize. Later in the day, Fed Chairman, Jay Powell, gave a speech and said, the Fed is close to it’s target and will not be aggressively raising rates in the near future. That was enough to send stocks sharply higher.

Stocks paused on Thursday to consolidate Wednesday’s very strong rally and digest the latest round of data. In pre G-20 news, President Trump canceled his meeting with Russian Premier Putin, citing concerns about the Ukraine crisis. Separately, investors were spooked after the South China Morning Post reported that White House advisor Peter Navarro would be attending the dinner between President Donald Trump and Chinese leader Xi Jinping in Buenos Aires.

Navarro is a big proponent of the tariffs and many people view his attendance as a negative sign. In other news, the minutes of the Fed’s latest meeting were released and Fed officials want to raise rates in December but it is worried about tariffs and debt. Stocks rallied on Friday as the world waited for the G-20 meeting.

Christmas arrive early on Wall Street after the Fed did a 180 and changed its stance regarding future rate hikes. Right now, the next big levels of support to watch are October’s low and then February’s low. Meanwhile resistance is the 200 and 50 DMA lines & then 2018’s high.

As always, keep your losses small and never argue with the tape.

Do You Know The 20 Cheapest Stocks On Wall Street? Our Members Do… Join CheapBargainStocks.com