EUR/USD has been looking for a new direction after the Fed-fueled surge. Markets will be digesting this week's policy shifts and euro-zone PMIs while watching Iran.

Has the Euro-zone economy bottomed out? Markit’s forward-looking purchasing managers’ indices suggest things are going in the right direction. Germany’s manufacturing PMI is off the bottom with a score of 45.4 points compared 44.3 last time, indicating slowing contraction. The parallel French figure for June also beat expectations with 52 points – above 50.8 projected – and reflecting accelerating growth.

The data may cause a rethink at the central bank, which has turned dovish earlier this week.

Which central bank will have the upper hand in repressing its own currency this week? So far, the US Federal Reserve is winning in pushing the US dollar lower.

The Fed has opened the door to rate cuts by expressing concern about growing uncertainties and low inflation. Officials have also dropped the word “patience” which refers to interest rates from their statements, and some expect a reduction of 50 basis points in July.

On the other side of the Atlantic. Mario Draghi, President of the European Central Bank, has also set the stage for additional rate cuts – despite a negative deposit rate of -0.40%. The ECB is also worried about low inflation.

Markets are still digesting these developments that have resulted in a 140-pip trading range so far this week.

EU leaders have failed to divvy up the top jobs in a lengthy summit in Brussels. Euro traders await the nomination of the next president of the ECB after Mario Draghi steps down in November. If Jens Weidmann, President of the German Bundesbank takes over, the euro will have room to rise in response to Weidmann’s hawkish approach. The nomination of Benoit Coeure may trigger a downfall in the euro due to the Frenchman’s dovish views. Two Finns are in the race as well – Olli Rehn and Erkki Liikanen, both experienced central bankers.

Donald Tusk, President of the European Council, has summoned an extraordinary summit for June 30th to sort out the top jobs.

Geopolitics are also eyed today. US President Donald Trump has reportedly ordered an air strike against Iranian military bases but changed his mind at the last moment. Tensions have been intensifying after Iran downed an American drone in the Persian Gulf. The US claims the drone was flying in international waters while the Middle-Eastern nation has claimed it invaded Iran’s airspace. 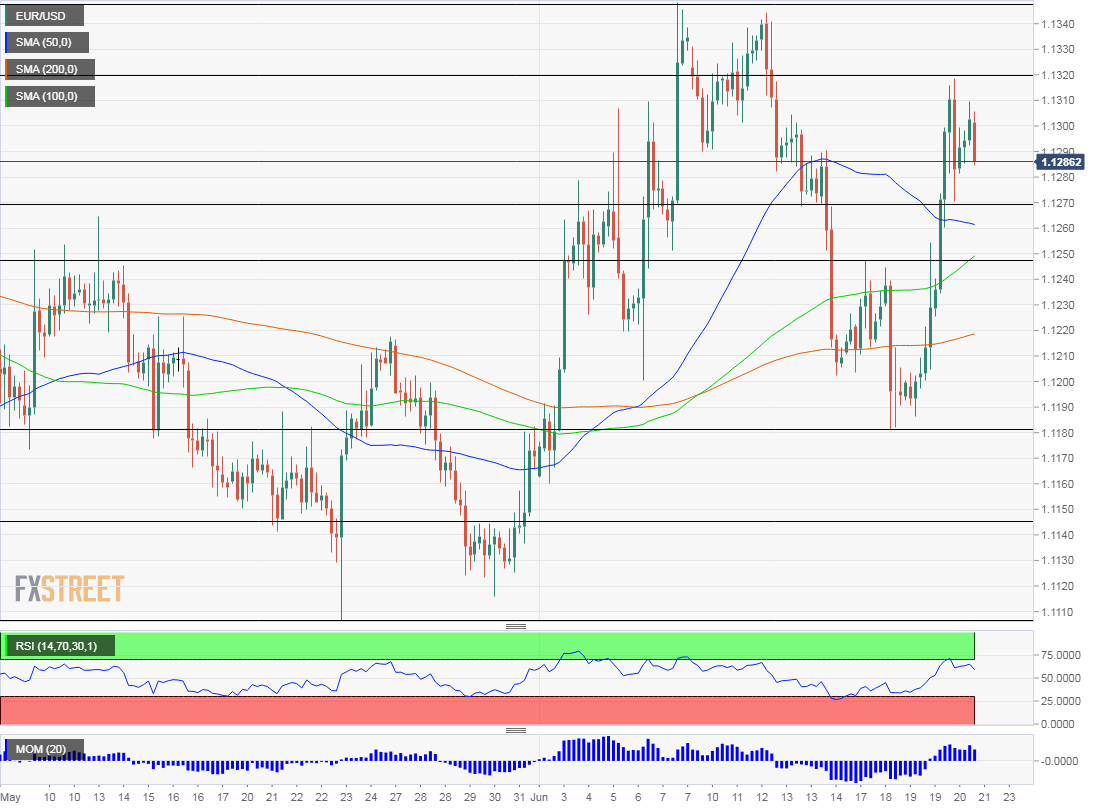 EUR/USD has continued enjoying upside momentum on the four-hour chart and holds its ground above the 50, 100, and 200 Simple Moving Averages. Moreover, the Relative Strength Index has dropped below 70 – exiting overbought conditions – and adding to the bullish outlook.