Emerging Markets and Europe: When Will It Be Time To Buy?

While a contrarian call at this point is likely premature, longer term, investors may want to embrace the rally in emerging-market stocks.

The global landscape of economic growth is one of the “critical variables” that we watch as a barometer of recession risk. A year ago we reported that the world was enjoying a coordinated uptick in economic growth. (Our regular readers will remember none of the member countries of the Organization for Economic Cooperation and Development (OECD) had economies in recession, and economic growth in most of them was accelerating. We viewed this situation as bullish for stocks in the U.S. and in other economies closely linked to the climate of global trade, especially manufacturing exporters in emerging markets.

A year later, and things look a little different. On the side of hard data, while the strength of global growth shows some slight expected deceleration in 2018 and 2019, the overall picture is still strong. Despite a few trouble spots that feature prominently in the news, such as Turkey and Argentina, all of the OECD member economies are growing, and the majority are still accelerating — expecting higher growth in 2019 than they experienced in 2018. A three-year stretch of such growth in the world’s most important economies is rare in the past half century. 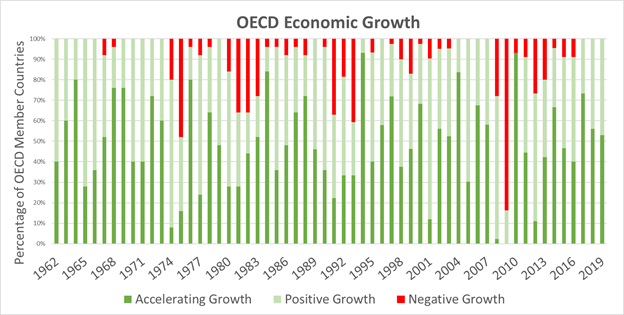 But there are clouds. U.S. President Donald Trump, who has a track record of criticizing Chinese trade policy going back decades, has made good on his campaign promises to apply intense pressure in trade relationships that he views as unfair to the United States. The news surrounding trade conflicts has helped depress investor sentiment about much of the world, both developed and developing, outside the U.S.

Another factor at work has been the U.S. dollar. The dollar rallied strongly in the second and third quarters, peaking in mid-August. 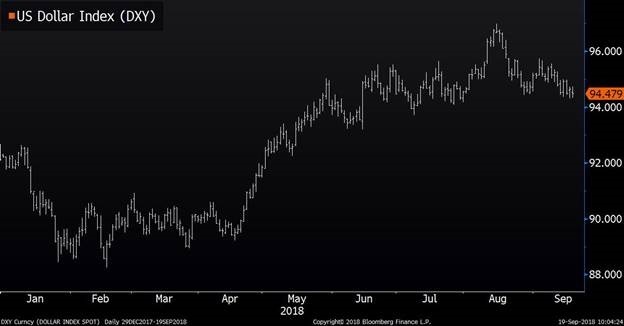 Since that peak, the dollar has moved slightly lower. Stocks outside the U.S. have rebounded in September — partly because of the perception that the dollar rally has lost steam; partly because the investing public has begun to acclimate to trade-war rhetoric and view it as loud, tough negotiation; and partly just on a reversion-to-the-mean thesis. With the performance differential between the U.S. and emerging markets standing at multi-year highs, for example, some analysts are inevitably beginning to make contrarian calls that it’s time for investors to revisit the battered world of stocks outside the United States. 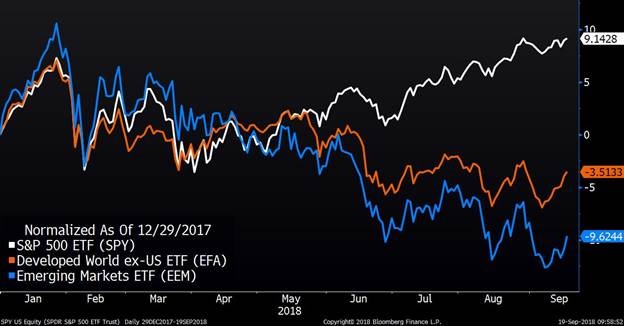 We think that this contrarian call is likely premature, longer term we may embrace the current rally in emerging-market stocks.

It’s important not to lose sight of the fundamental economic backdrop. Investors will move to the countries where this is the strongest.

It is true that globally, with a few problem-child exceptions, the economic growth backdrop remains quite strong by historical standards. However, there is one critical factor to bear in mind: the regulatory and tax environment, and the momentum of regulatory and tax policy. This environment is quite clearly better in the United States than anywhere else in the developed world, and the direction and momentum of change is also the best. Where Europe, for example, is on average increasing regulatory burdens and pressures on businesses, the United States is reducing and easing them. This reality is highlighted by the data we showed last week that small business optimism now stands at the highest level in the history of the survey — exceeding the high of the Reagan administration. Small businesses are the primary engines of innovation, economic growth, and job creation in the U.S. If small businesses feel that their prospects are strong, that bodes well for the whole country’s economic health. 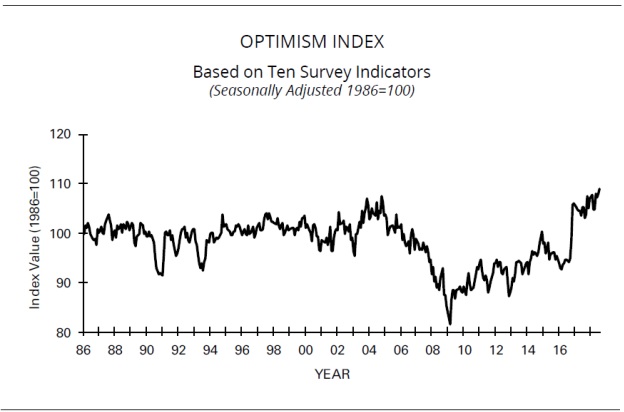 Emerging markets make sense for dollar-based investors only under conditions in which investment gains will not be compromised by currency losses. While, again, there may be a counter-trend rally in emerging markets as contrarians step in, and as it becomes clear that EM problems are restricted to a few troubled economies, we are skeptical that this rally will provide more than an opportunity for traders.

If we had to choose investment destinations outside the U.S., we would restrict ourselves to parts of Europe that have a more encouraging regulatory climate for business — especially countries in eastern Europe, and perhaps in Switzerland. We believe that fears of economic disruption for the U.K. resulting from Brexit are exaggerated, and U.K. stocks and the pound could provide trading opportunities as a consequence. In emerging markets, we would steer clear of most; in the longer term, India presents superior growth prospects if the transformation inaugurated by Narendra Modi remains on course. When and if the dollar’s sideways-to-down movement is confirmed, we might consider revisiting emerging markets with strong growth prospects, especially Asian manufacturing exporters.

Investment implications: Some analysts are making the case that it’s time to look outside the U.S. at stocks in non-U.S. developed markets and in emerging markets. However, although the U.S. dollar has recently moderated its strength, we’re skeptical that this moderation will be lasting. We still favor U.S. stocks and don’t believe the time has yet come to rotate to markets outside the U.S. There may be trading opportunities; look for those, but not yet for an investment entry point.