DNP Select Income Fund and the Magic of Dividends

Shares have never traded higher than around $12 in the past two decades. So, why is this investor recommending it?

When we first invested in DNP Select Income Fund (DNP), shares were trading near their 52-week high. And since buying in, shares have dropped to as far as the $9 range. But I’m not worried at all, asserts Brit Ryle, editor of The Wealth Advisory.

If I were to show you the stock chart for the 20-year history of DNP, you’d think I was crazy for recommending it. Shares have never traded higher than around $12 in the past two decades: 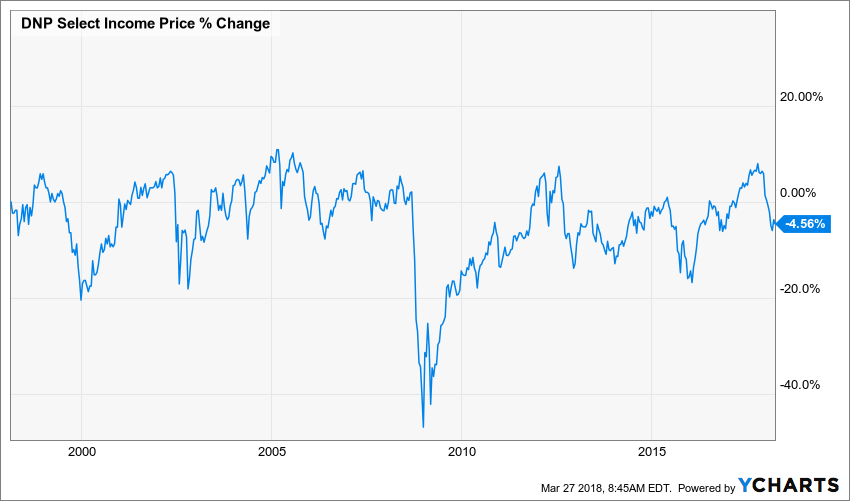 And they’ve barely headed south of $8 during that whole time either — aside from a brief drop into the $6 range during the depths of the 2008 recession.

In fact, over the course of the past 20 years, shares are down by around 5%. So, why on earth would we want to own an investment like that? 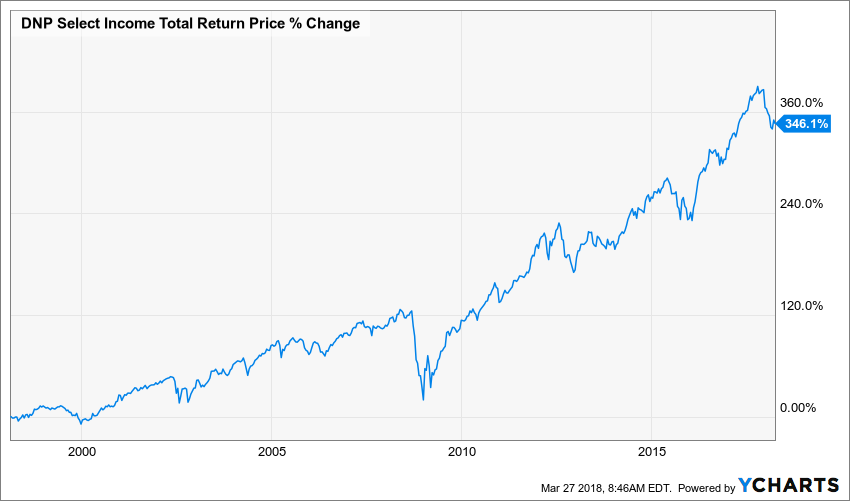 How’s that? Well, it’s through the magic of dividends. The fund has paid a monthly dividend since it started. And those dividends have added up.

Thanks to those payments, folks who bought DNP back in 1998 paid an adjusted entry price of just $2. And with every month that passes, their average costs just keeps falling. At the current payment level, they’ll have gotten all their initial investments back in dividend payments by mid-2020.

And with DNP’s management so favorable when it comes to making extra payments, early investors could see their initial investments paid off even earlier. That’s some serious profits. And all from an investment that’s never broken out of that super-tight trading range.

You see, with DNP, we don’t have to worry about our shares becoming worthless. If history is any indicator, even if the market plummets, our shares won’t drop lower than $6. And if shares ever get that low again, we’ll be buying them by the handful.

Because every single time that DNP has dropped to the bottom of its range, it’s climbed back up again just as quickly. It’s reward without risk. Well, without the kind of risk you’d usually have to take to get those kinds of rewards.

When it comes to closed-end funds (CEFs), they own a basket of assets — usually stocks and bonds — and that basket has a market value. That’s the net asset value (NAV) of the fund. It’s what the fund should expect to get if it sells off everything it owns.

I know, that sounds way too complicated. But it’s really not. What it means is that some funds always trade at a premium to their NAV, meaning that they always cost more than the value of their assets.

Some always cost less. And that’s why it’s important to look at their historical prices versus NAV ratios and compare it to their current ones.

DNP is a fund that always trades at a premium. As I’m writing this, shares cost $10.20. But the NAV is only $8.68. That’s nearly 18% less than the fund costs to own. It doesn’t start to sound like a deal until you look at the historical premium to NAV. That’s around 14%.

So, while DNP is hovering around the $10 level, it’s a great time to start a position if you haven’t done so yet. This is basically the fund’s historical middle ground. And if it drops below $10, it will be time to start accelerating your buying schedule.

I don’t expect that we’ll see it below $8 anytime soon. But if ever we do, I’ll recommend adding as many shares as you’ll be able to afford. It won’t be long before you’ll be rewarded by both dividends and capital appreciation as DNP’s NAV heads up and its shares head back to their comfort range.