Demographics and Automation Will Create a Perfect Economic Storm Until 2030

Analysts think automation will eliminate up to 25% of US jobs by 2030,

The bad news is that Bain thinks automation will eliminate up to 25% of US jobs by 2030, with the lower-wage tiers getting hit the hardest and earliest. That will be devastating, and it’s not that far away.

On a positive note, Bain predicts that the manpower needed to build out the technology will keep us all working until 2030. The Bain team is way more optimistic than I am. But they have their reasons.

Why Is This Happening?

The answer is demographics and automation. Employers increasingly turn to automation as they can’t find enough workers with the skills they need.

The Baby Boom generation is leaving the workforce—although many Boomers are putting off their retirementas long as they can. The additional labor that came from one-time factors like China’s opening up has mostly run its course.

At the same time, technology is getting better and less expensive. 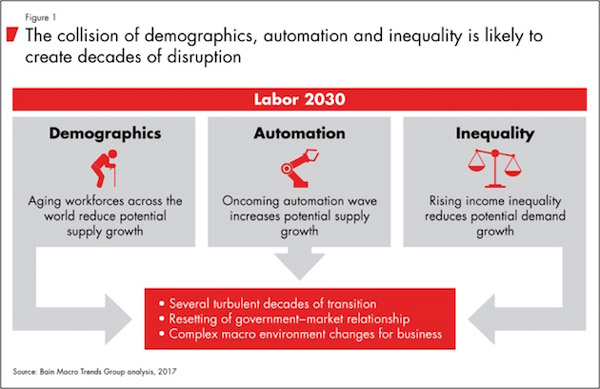 Much of the job automation so far has been mild. It has mostly replaced dangerous factory work or other repetitive, unpleasant manual labor.

Often, automation makes human workers more productive instead of replacing them. But that’s about to change as artificial intelligence technology improves. Machines will be able to perform cognitive tasks that once required highly trained, experienced humans.

Automation Will Hurt Everyone

This trend might look like a good thing to employers. Invest in machines, lay off people, mint more profits.

But that’s short-sighted because someone has to buy your products. The laid-off workers won’t spend as much unless they get new jobs.

In theory, automation will enable lower prices, which will raise demand and create more jobs. Bain does not think it will happen that way. They foresee up to 40 million permanent job losses in the US. 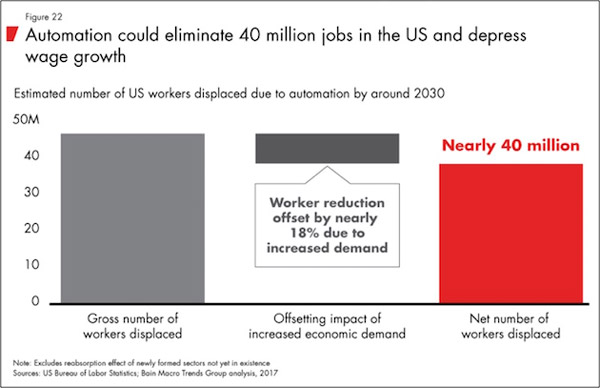 In the next 10–12 years, the US economy will swing from a labor shortage to a huge labor surplus. With the labor force presently around 160 million, this implies an unemployment rate around 25%.

I find it hard to see how we could call that an economic boom.

Bain’s report also points out that wages will go down long before workers get replaced by machines. The mere existence of the new technologies will cap wages as the price of automating vs. employing humans falls.

This will increase inequality and curb consumption. The best case is that reduced demand will result in decades of flat or mild growth. The worst? Economic dislocation and inequality lead to social breakdown and more calls for government intervention, higher taxes on the wealthy, and more generous welfare programs.

None of those outcomes would be good, but it’s not clear to me how we’ll avoid them.

There is a 50-50 chance that a left-wing populist movement will arise in the coming decade. And those odds mean higher taxes. And larger government and more government controls. And a wealth tax.

Not an income tax, mind you, but a tax on all your wealth.

Now imagine having to “donate” 1% or 2% of your net worth to the IRS every year. It could happen, and if it does, it will make it that much harder to keep your assets growing against other headwinds.

I know that many of us think this outcome would be a terrible thing for the country. But it is quite possible that many more voters in this country will disagree with us, and things will change.

Remember that the significant majority of Millennials, who will be voting in greater numbers, think that socialism is superior to free-market capitalism.

For investors, a wealth tax would mean that merely keeping your wealth, let alone growing it, may get a lot harder in the next decade.