Essential Utilities Inc., formerly known as Aqua America, is a company to watch.

In 2002, the deadly pneumonia-like virus known as SARS jostled world markets. At the time, China was mainly a producer of low-cost goods like shoes and t-shirts. Eighteen years later, China has evolved into the second largest global economy. International companies are closing stores, and factories have shuttered, leaving the potential for delays in the worldwide supply chain.

“China today accounts for about one-third of global economic growth, a larger share of global growth than from the U.S., Europe and Japan combined,” Andy Rothman, an economist at Matthews Asia.

In an uncertain geopolitical climate like this, utility stocks are a traditional haven for safety-seeking investors. The S&P 500 Utilities index is up 7.4% since Monday, January 6, 2020. Reuters recently reported that the S&P utilities sector outpaced other traditional safe havens since January 21, 2020, including gold and the Japanese yen. Dividend yields are another attractive characteristic of utility stocks. The sector boasts a dividend yield of nearly 3%, compared to 1.6% for 10-year Treasuries.

Outside of being a resilient safe haven, another factor potentially increasing the demand for utility stocks is the rise of ESG investing. Environmental, social and governance investing entered our financial lexicon following the landmark study entitled “Who Cares Wins.” Led by former UN Secretary General Kofi Annan, the UN Global Compact and the International Finance Corporation (IFC), the report made the case that ESG investments made for good business and would also lead to sustainable markets. A few critical attributes of ESG investments are:

Fifteen years later, ESG investing is estimated at over $20 trillion in AUM, according to Forbes. Additionally, U.S. water utilities are seeing an increased injection of cash due to ESG investors. CNBC reported water utilities profit from investors caring more about the environment but also acting defensively against resource shortages.

Essential Utilities: A diversified utility when you need it most

“A lot of those ESG funds use water utilities as a proxy of water scarcity,? Angie Storozynski, managing director and senior analyst at Macquarie Capital, told CNBC. “They have been doing particularly well because there is this additional environmental oversight.”

Essential Utilities Inc., formerly known as Aqua America, is a company to watch in this sector. Founded in 1886, the company is the second-largest publicly traded water utility in the US, serving over three million customers in eight states. To solidify water mains and wells, the company has also invested $774.8 million in infrastructure over the last two years.

In September 2019, operating then as Aqua America, Essential beat out American Water to buy the Delaware County Regional Water Authority (DELCORA) for $276.5 million. The deal was a massive win for Essential Utilities as DELCORA represents a large, regional base of 165,000 retail customer equivalents and many industrial users serving 42 municipalities in Delaware. As an aside, water consolidation has also been an ESG talking point for Essential Utilities and other water utility companies. For example, American Water released a study showing water consolidation saves money by shoring up rusted pipes thanks to a larger base of employees and available cash flow.

The biggest acquisition for Essential Utilities—which caused it to change its name from Aqua America—was the closing of Peoples Gas, a Pittsburgh-based natural gas distributor. The $4.2 billion all-cash deal was announced on October 23, 2018, but finally received regulatory approval after a lengthy battle on January 16, 2020. Peoples is now a subsidiary under Essential Utilities and brings a total of 740,000 total customers along with it. The company is still primarily focused on the Keystone State, but now has 34% of its customers spread out among Ohio, North Carolina, West Virginia, Kentucky, Texas and Illinois. Moreover, Essential Utilities believes the deal will add 45% to the rate base. The Peoples acquisition also diversifies the company’s utility mix to 70% water and 30% natural gas. 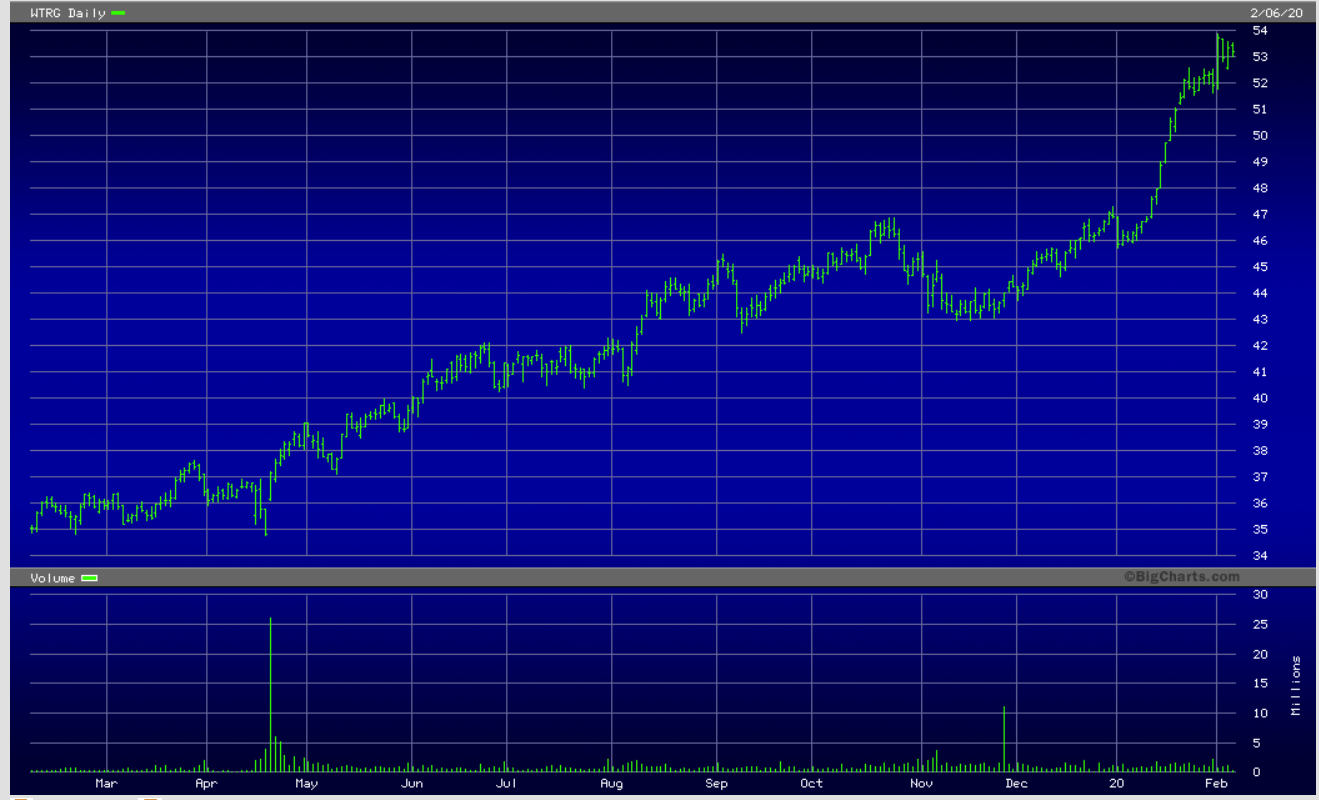 Furthermore, Essential Utilities boasts a dividend of $0.93 for yield of 1.76%. To the delight of shareholders, the company has paid consecutive quarterly cash dividends for 74 years and increased the dividend 29 times in the last 28 years.

The stock’s share price has seen a 52% increase over the last year. Essential Utilities’ convergence of water and natural gas, we believe, could be a catalyst to drive them even higher. Lastly, with the coronavirus spreading rapidly, a defensive trend should continue across Wall Street for months to come.