Currencies and Sanctions: A New World of Foreign Policy?

Attempts to rein in lira short-sellers, if history is a guide, will not achieve the desired effect.

Drama has unfolded in emerging markets, starting last week as the Trump administration stiffened tariffs against Turkish steel and aluminum, exacerbating the Turkish lira’s sharp decline. Stock markets soured globally as investors tried to determine whether Turkey’s problems were relatively isolated, or if there could be wider ramifications. European financials declined amid speculation about European banks’ exposure to Turkish debt.

By early this week, the lira and the Turkish stock market were rebounding from their panic lows. But given the landscape of continued divergence between the United States and the rest of the world in economic growth and interest-rate policy, anxiety remained that fragile emerging-market economies with a lot of U.S. dollar-denominated debt could be tipped over the edge if Turkish instability proved contagious. Argentina, faced with similar stresses, took the orthodox path and hiked interest rates to 45%. Turkey has made no such response; instead the administration is digging in for a fight and increasing nationalist rhetoric. Attempts to rein in lira short-sellers, if history is a guide, will not achieve the desired effect. 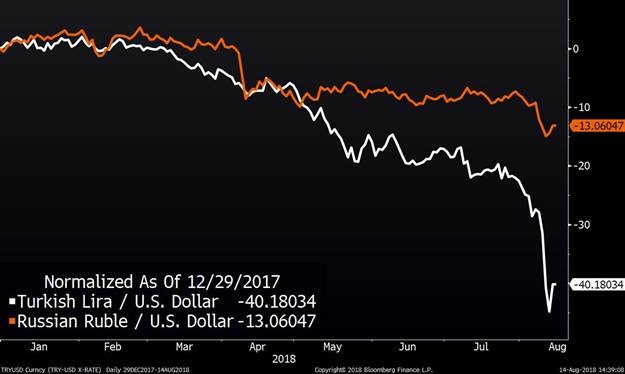 Turkey and Argentina are severe cases, but they are not alone among emerging-market currencies. Others have also tumbled, notably Russia’s. The ruble’s concurrent decline with the lira’s move last week was not nearly as severe, but the countries have something in common: they find themselves at odds with the United States and facing potential tariffs or sanctions.

Between July 30 and August 10, the ruble dropped 8.2% against the dollar; the lira dropped 24% in the same period. Both were already headed down, but accelerated their declines sharply when trouble intensified with the U.S.

In Turkey’s case, it was tariff tightening prompted by a stand-off over the fate of U.S. pastor Andrew Brunson, a resident of Turkey since the 1990s who has been accused of complicity with the architects of a failed coup in 2016, and held in detention and under house arrest.

In Russia’s case, it was the belated application of sanctions mandated by a 1991 international treaty banning certain chemical warfare agents. The government of the United Kingdom concluded that Russia used banned agents in a March 2018 attempt to assassinate a former Russian double agent now living in Britain — a style of revenge which the Kremlin has often employed in the past. With that determination by the UK, sanctions come into play as a matter of course, in two stages. First, the relatively mild sanctions enacted on August 9; and in 90 days, a much more severe set of sanctions that could produce real trouble for the Russian currency and economy. In order to avoid the next round of sanctions, Russia would have to permit international inspections — which would be extremely unlikely.

Of course, there may be other developments going on under the surface. Many media sources have pointed out in recent days that the U.S. may be less than happy that Turkey, a NATO member, is purchasing defense electronics from Russia.

From Turkey, to Russia, to China, we see a pattern emerging: the line between economic and political pressure is blurring. Of course, realistically, this has always been true, but in this case as in many others, the current U.S. administration is bringing something into the light that has long been done outside of public view. The Trump administration is willing to apply economic pressure in order to accomplish political and geopolitical goals, and willing to do so openly.

In short, while “tariffs” (economic pressure) and “sanctions” (political pressure) may be very different things, which in the past might prompt different market responses, those categories are beginning to merge.

Investment implications: In the policy lexicon of the Trump administration, the political and the economic are very closely related. As markets evaluate and attempt to price rising stress in emerging-market economies, particularly those with already-weak currencies and unfavorable dollar-denominated debt burdens, this policy shift may heighten volatility. Due to the effects of indexing, stronger emerging market economies, particularly in Asia, will be caught in downdrafts that occur. As anxiety and panic run their course, and depending on the broad strength of the U.S. dollar, we will be bargain-hunting in economies with favorable growth characteristics — particularly tech-heavy manufacturing exporters.