Could a Big Move in the Global Markets Be Setting Up?

The recent news is that the European leaders are convening an Emergency Meeting. We believe this emergency meeting could result in a big fat...

Over the past few months, our research team has authored many articles regarding the weakness in China/Asia as well as the recent rotation in the global markets as trade issues, debt issues, the G7 meeting and, more recently, concerns in the US and Europe regarding immigration and political issues create chaos in what was, just 18 months ago, a relatively calm global market. Yes, there have been some concerns over the past few year with regards to debt issues and other concerns, but the recent shakeup in the status-quo of the global markets seems to be presenting a massive opportunity for investors.

We believe this emergency meeting could result in a big fat “nothing” from the EU which will expand additional pressures on EU member nations to find solutions on their own regarding immigration, costs, debt and others. In other words, if our assumption is correct that this meeting will result in the EU leaders saying “well, it’s just the way it is right now – we’ll have to come together to find a way to deal with it” will result in a massive backlash revolt from other EU members.

Additionally, concerns originating from within China and Asia are indicating that massive debt issues, defaults and margin calls. We warned of this economic contagion cycle back in late March 2018 and early April 2018 with our detailed multi-part research post. This is just beginning as China has been an economic leader for most of Asia, thus as China deals with a contracting economy and some levels of economic contagion, so will the rest of Asia.

We expected to see an explosion in defaults and reduced foreign capital investment as China attempts to curtail this credit crisis event. This means many of the emerging markets will see some extended weakness while pricing attempt to find support in the face of unknowns and unpredictable outcomes.

Lastly, in the US, with mid-term elections only about 3 months away, and with Mexico having elections only a few days away (July 1, 2018) a number of key factors for North America are unknown.

Right now, Andres Manuel Lopez Obrador (ALMO) appears to be a potential winner of these elections, yet from news we see that Mexico is moving away from new-liberalism and towards a more populist leader that could expand tensions with the US President. Just recently, ALMO urged Mexican citizens to overwhelm the US with illegal immigrants while attempting to move Mexico away from reliance on the US for economic support.

Our opinion of this is that ALMO is walking a very fine line given everything that is going on throughout the globe at the moment and although it may sound good to his people – there may be some very tough situations ahead in making this a reality.

We, the research team at www.TheTechnicalTraders.com, have recently released a Members Only update to our valued members that shows our predictive modeling systems expectations over the next 2~4 weeks for the US equity markets. We can’t show these to you because this is a free article to help you see what is happening and that the markets are about to have some big moves.

What will happen? That is only for our subscribers at the Wealth Building Newsletter. But, what we can show you is what we believe are critical charts for the next few weeks in regards to the global markets and the expectations ahead.

First, Bitcoin recently broke below the $6k level on a breakdown move that could be a sign that no strength really exists near this $6k level. Please understand that if this $6k level is broken and no real support is found near this level to keep prices above $6k, then $4k or lower is an immediate downside target. Below $4k, we are talking about $1600 price levels. This represents a 70% price decrease from recent level if it happens. So, pay attention to Bitcoin as we believe the meltdown in cryptos could present real issues in the global markets as a derivative market risk factor. 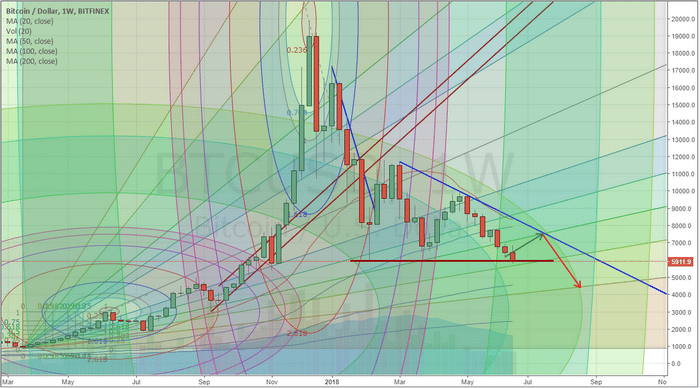 Next, this Weekly BRICS chart (emerging market custom index) is clearly showing the weakness in price levels extending much lower over the past few months. Remember, the BRICS markets are a basket of major emerging markets and this price channel breakdown could be an early warning of a much larger downside price trend setting up. Weakness below immediate support may result in an additional price decline of -20% or more from current levels. 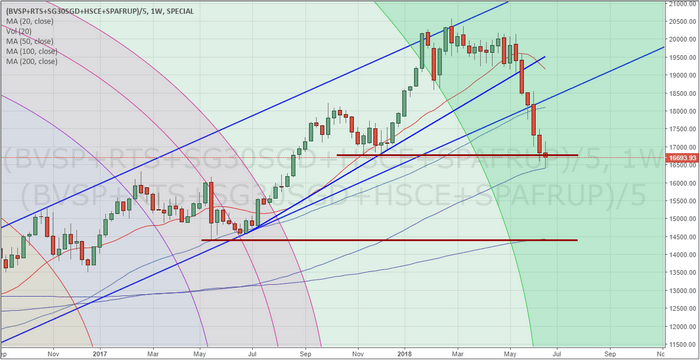 This Weekly China/Asia custom index is showing us that recent price weakness has recently broken a FLAG/PENNANT formation that tells us price weakness could accelerate as debt issues, defaults and margin calls expand. Somewhat similar to what happened in the US 10 years ago, when this debt bubble continues to collapse, the issue is how do the Chinese contain this collapse event while continuing to support their global efforts and multi-national efforts to become a global economic leader? Think about it and understand that China has expanded quite extensively over the past 12+ years on the support of the global central banks and US Fed. The recovery efforts throughout most of the world have created an environment where China could attempt to expand with ease and allow their credit markets to expand without much risk. Well, not that the world is changing direction and President Trump is attempting to settle trade and other issues – it’s a completely new playing field for the Chinese and for most of the world. We believe the next few months could show further signs of weakness in the Chinese and Asian economies as well as, potentially, lead to an emerging market collapse before the end of this year. 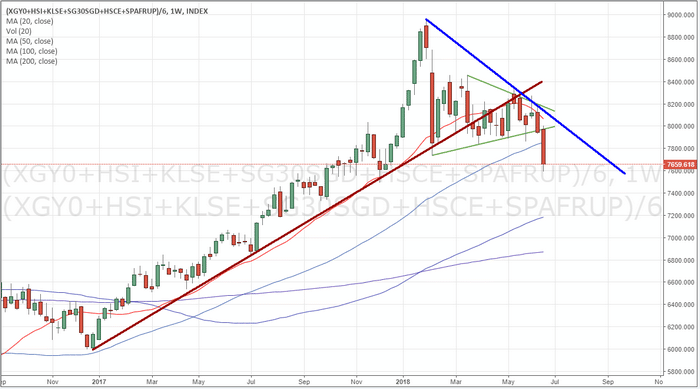 Lastly, the US Dollar. Yes, the trusty old GREENBACK. It is not very difficult to explain or understand why the US Dollar will likely stay above 110~115 over the next few years and likely push a bit higher over the next few months. All of the preparation by global economies to bring multiple national economies near par with the US economy (think the European Union and the efforts of China to bring the Yuan into the global market as a suitable currency), have resulted in what we have today – an expansive effort to bring foreign economies to near par basis levels against the US Dollar. The attempt to accomplish this was based on a bias that existed 8+ years ago during the global economic recovery efforts and was based on the ability for “all economies” to achieve great success and develop renewed balance as a result of such efforts.

In other words, the intent was to create multiple base currencies that could be used in global transactions that were near par to the US Dollar – ideally removing the US Dollar as the only real stable currency for such transactions.

Yet, here we are – on the cusp of what could become a global divergence from these “best-laid plans” and on the verge of a greater level of debt contagion, credit defaults, margin calls, global political issues and global immigration issues as a result of these globalist biases. Europe, China, Asia and dozens of emerging markets and European markets are having to defend themselves from the seemingly out of control liabilities and expenses with these globalist biases. Just as we are seeing in Mexico right now, this defense is resulting in a populist/nationalist movement that could push the unraveling of these biases even further.

And what happens to the US Dollar through all of this? Our belief is that the US Dollar will, again, attain and secure itself as the leading global currency with continued strength and security. We believe a massive capital flight mechanism has already been active where foreign capital is rushing into the US markets in an attempt to avoid devaluation and risk factors. We believe this will continue for at least the next 6~12 months as global issues continue to be resolved. 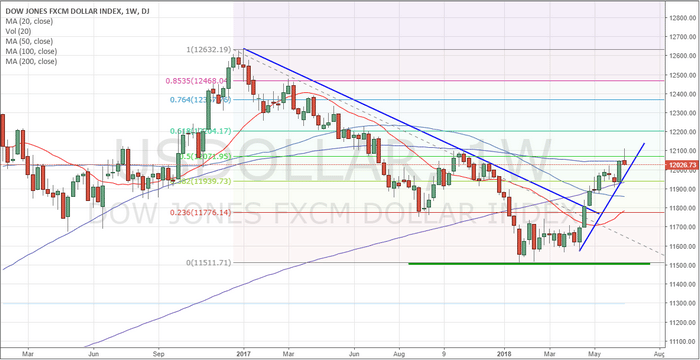 Please take a moment to review some of our other, older, research posts by visiting www.TheTechnicalTraders.com and seeing how we can help you stay ahead of the market and find greater success while trading. Our members love our research, our predictive price modeling systems, our Daily video forecasts, ETF trade alerts, and more. Our job is to help you become a more informed, and better trader. We know you will be satisfied with our efforts and we urge you to become one of our valued subscribers today. 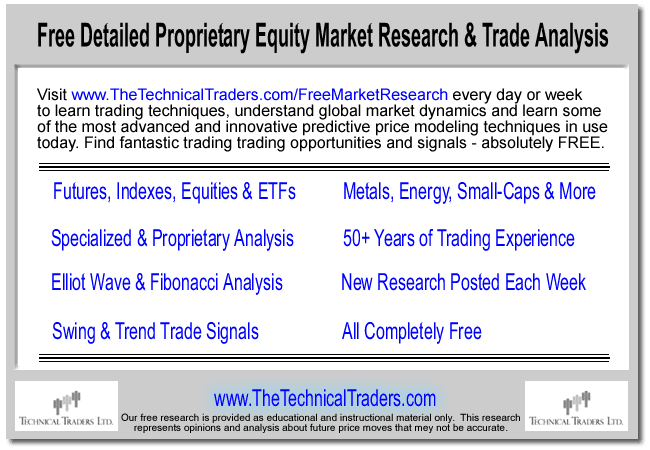