The CME launched bitcoin options. Who will be first with a bitcoin ETF?

Aside from its breathtaking mountains, world-famous chocolate and wartime neutrality, Switzerland is perhaps best known for its commitment to financial privacy. Banking secrecy became law in 1934, making it a crime for Swiss banks to disclose accountholder information of any kind to third parties.

Although such privacy laws have been impacted in recent years—most notably by U.S.-led global efforts to counter money laundering and tax evasion—Swiss banks still enjoy a reputation for being secure and discreet, and they continue to attract assets from all over the world.

It’s appropriate, then, that the country should host the world’s most private conference on what’s potentially the most private asset class: cryptocurrencies. Last week, hundreds of crypto investors, experts and enthusiasts from all around the globe descended on the legendary skiing resort town of St. Moritz to attend and learn at the Crypto Finance Conference.

The conference’s timing couldn’t have been more perfect. Bitcoin had its best start to the year since 2012, rising more than 22 percent in the first 15 days. 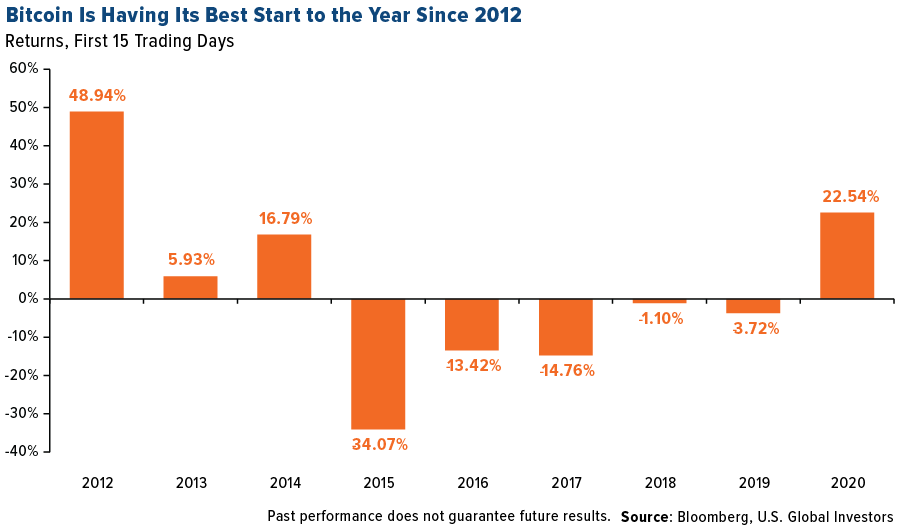 Among the biggest contributors to the rally, as I see it, is the hope that 2020 could finally see institutional investors move into the digital field en masse, prompted by growing client demand and more attractive ways to get exposure than direct ownership of coins. Last week, the Chicago Mercantile Exchange (CME) launched one such product, a bitcoin options contract, which reportedly had a successful first day of trading with a total of 55 contracts, worth 275 bitcoin, or the equivalent of $2.4 million.

Who Will Be First With a Bitcoin ETF?

Advisors, though, may be holding out for an exchange-traded fund (ETF) backed by cryptos such as bitcoin, if a recent survey is any indication. As much as 65 percent of respondents to a survey conducted by crypto indexer Bitwise and ETF Trends said that a crypto ETF was their preferred method of getting exposure, followed by a distant 16 percent preferring direct ownership and an even more distant 9 percent preferring a mutual fund. 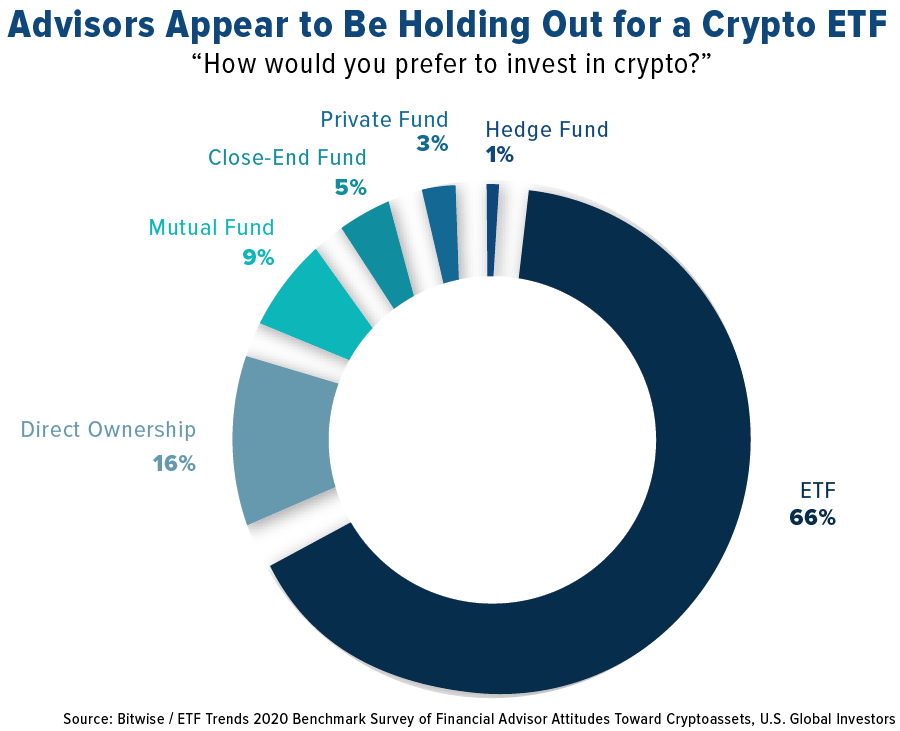 At the moment, no such ETF is available because the Securities and Exchange Commission (SEC) has yet to approve one. Bitwise, in fact, withdrew its proposal for a bitcoin ETF last week, with Bitwise global head of research Matt Hougan telling The Block that the firm intends “to refile our application at an appropriate time.”

It’s no exaggeration to say that a bitcoin ETF is highly anticipated.

If you recall, I explored the feasibility of launching such a product a couple of years ago, ultimately deciding that the regulatory hurdles were too prohibitively high. Instead, we elected to bring to market the world’s first publicly traded crypto-mining firm, HIVE Blockchain Technologies. More than two years after its debut on the TSX Venture Exchange, investors continue to use it as a proxy for digital assets.

Last week HIVE announced an incredible 20 percent increase in newly mined Ether coins compared to the last 15 days of December 2019. That’s thanks to the completion of the company’s Ethereum network upgrade dubbed the “Muir Glacier.”

Winklevoss Twins: Time to Get On Board With Bitcoin

There was a number of notable presenters at the conference, including J. Christopher Giancarlo, former commissioner of the Commodity Futures Trading Commission (CFTC), who reminded the audience that innovation must come before regulation. And yet the European Union (EU) has it backwards, putting rules in place that hamper innovation before it even has a chance to begin.

The biggest rock stars in attendance by far were the Winklevoss twins, Cameron and Tyler, cofounders and president/CEO of crypto exchange Gemini. During their “fireside chat,” the two bitcoin perma-bulls urged conference-goers to start “building up bitcoin reserves” in anticipation of significantly higher prices.

In particular, they targeted gold investors, saying they “think bitcoin will disrupt gold.”

“Once the likes of Tesla’s Elon Musk or Amazon’s Jeff Bezos start mining gold on asteroids, which will happen within 25 years, gold’s value will change,” Tyler Winklevoss told the audience.

With all due respect to Tyler and his brother, I don’t happen to agree that bitcoin will replace gold anytime soon, as I’ve explained before. For one, unlike bitcoin, gold has a number of uses outside of its roles as investment, currency and a wealth preservation vehicle. Two, the yellow metal can be traded without electricity, internet or WiFi. This makes gold especially valuable in situations where power and telecommunications services are unexpectedly unavailable, such as during or after a natural disaster.

Some Relief in U.S.-China Trade Spat, But More Work Is Needed

On a final, unrelated note, you’re probably aware by now that, after more than 18 months since the start of the U.S.-China trade war, a meaningful “Phase 1” agreement was finally reached between President Donald Trump and Chinese trade representatives. Although U.S.-imposed tariffs on China-imported goods still remain largely in place—presumably those will come off after a second round of negotiations—this is a positive step toward normalizing trade between the two superpowers.

The visual below, courtesy of Caixin Global, lays out exactly what China has agreed to. Over the next two years, the Asian country will be expected to purchase no less than $200 billion worth of U.S. goods and services, including $77.7 billion in manufactured goods and $32 billion in agriculture.

That’s a tall order, to be sure. In 2017, American exports to China were valued at $130 billion, the most ever, according to the Census Bureau. This leaves a $70 billion purchasing gap that China will need to fill somehow. 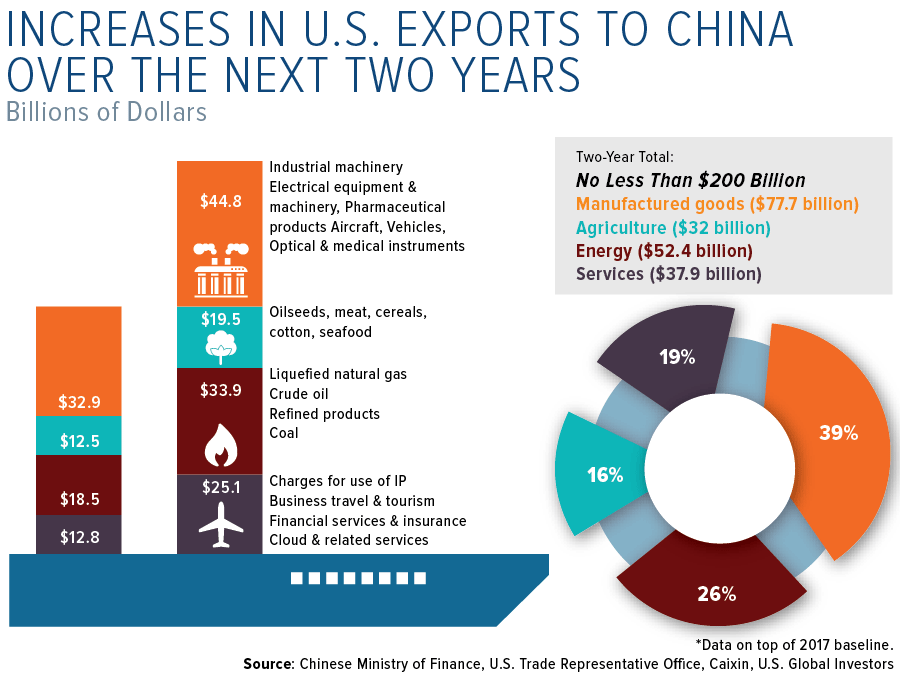 Washington and Beijing have also agreed to a “dispute settlement mechanism” to help resolve potential disputes during the implementation phase of the agreement.

Interestingly, the market didn’t respond too strongly on the news, gaining just under half a percent at its session high on Wednesday. This tells me that investors have likely already priced in the first phase, which, again, does not provide tariff relief. Perhaps not until the so-called “Phase 2” of the trade deal is signed will we start see to see significant recovery in the U.S. manufacturing sector.