Median progression-free survival of 14.9 months using encorafenib and binimetinib together.

Although much less common than basal cell and squamous cell skin cancers. melanoma is more dangerous because of the higher likelihood of metastasis, according to the American Cancer Society. There are about 200,000 new cases of melanoma diagnosed worldwide each year, approximately half of which have mutations to the BRAF (B-RAF, one of a family of rapidly accelerated fibrosarcoma kinases) gene, a key target in the treatment of metastatic melanoma.

Array BioPharma (Nasdaq: ARRY) announced that detailed results of its pivotal Phase 3 trial for the treatment of patients with BRAF-mutant advanced, unresectable or metastatic melanoma were published in The Lancet Oncology. In the analysis of the primary endpoint, the median progression-free survival (mPFS) for patients treated with the combination of encorafenib, 450 mg daily, plus binimetinib, 45 mg twice daily was 14.9 months versus 7.3 months for patients treated with vemurafenib, 960 mg twice daily [hazard ratio (HR) 0.54, 95% confidence interval (CI) 0.41–0.71, p<0.0001].

In February 2018, Array announced that this combination treatment demonstrated median overall survival of 33.6 months compared to 16.9 months for patients treated with vemurafenib alone (HR 0.61, 95% CI 0.47-0.79, p <0.001). The hazard ratio describes the relative risk of the complication based on comparison of event rates, while the confidence interval is a precision measurement indicating the range of values that is likely to include the true population value. 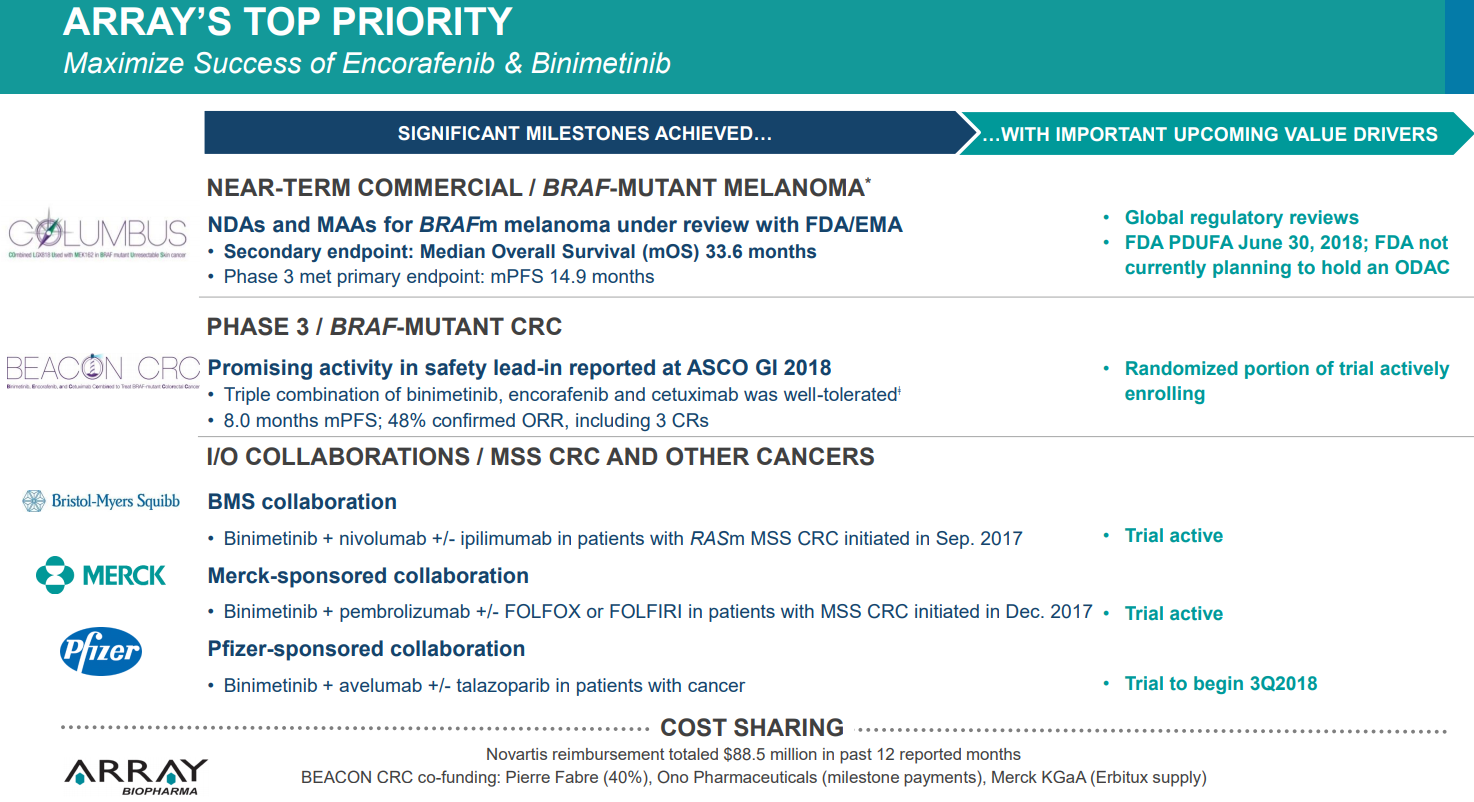 The manuscript entitled “Encorafenib plus binimetinib versus vemurafenib or encorafenib in patients with BRAF-mutant melanoma (COLUMBUS): a multicentre, open-label, randomised phase 3 trial,” was published online on March 21, 2018. Array had previously announced top line results from this study in September 2016.

The FDA is currently reviewing the New Drug Applications to support use of the combination of encorafenib and binimetinib for the treatment of patients with BRAF-mutant advanced, unresectable or metastatic melanoma and has set a PDUFA target action date of June 30, 2018 for both applications. In addition, the European Medicines Agency, the Swiss Medicines Agency and the Australian Therapeutic Goods Administration are each reviewing the Marketing Authorization Applications for encorafenib and binimetinib. 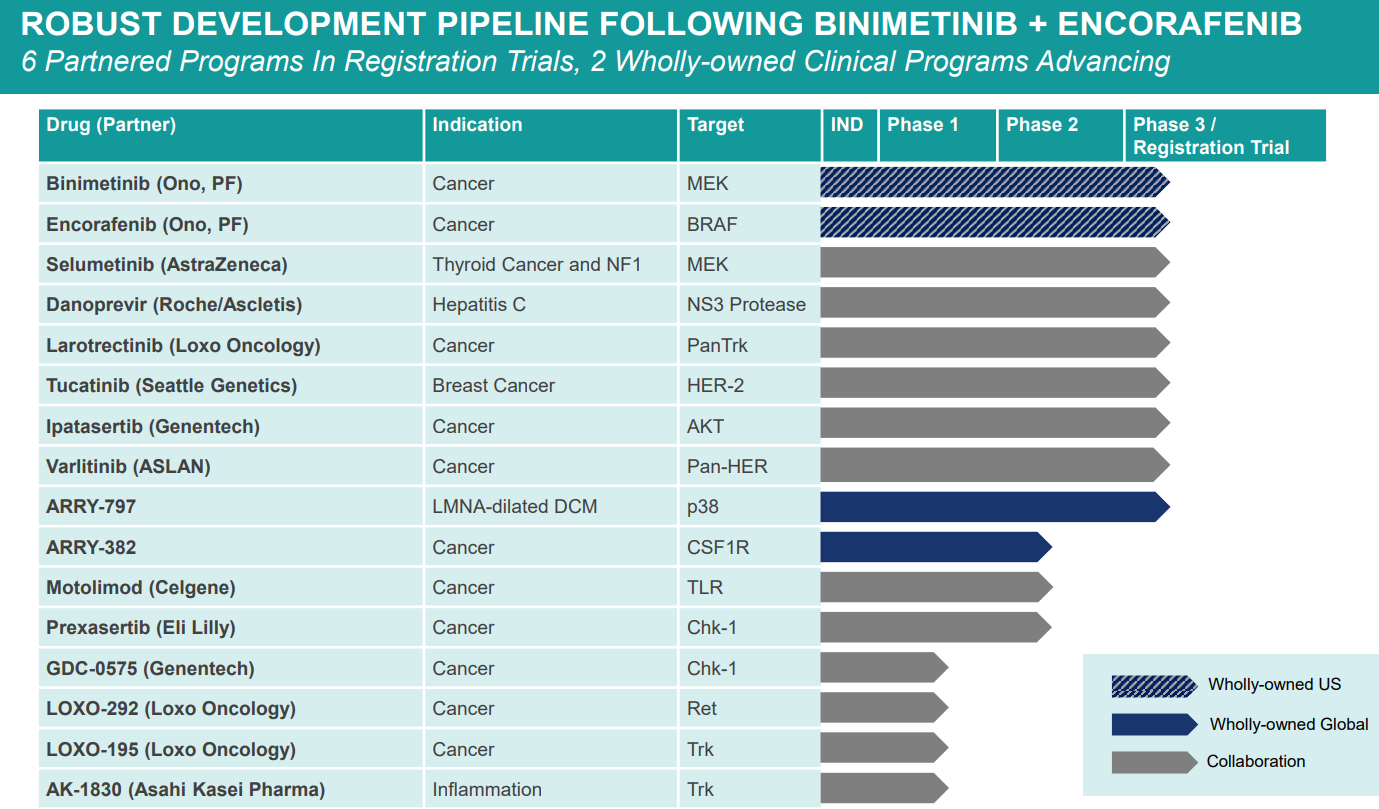 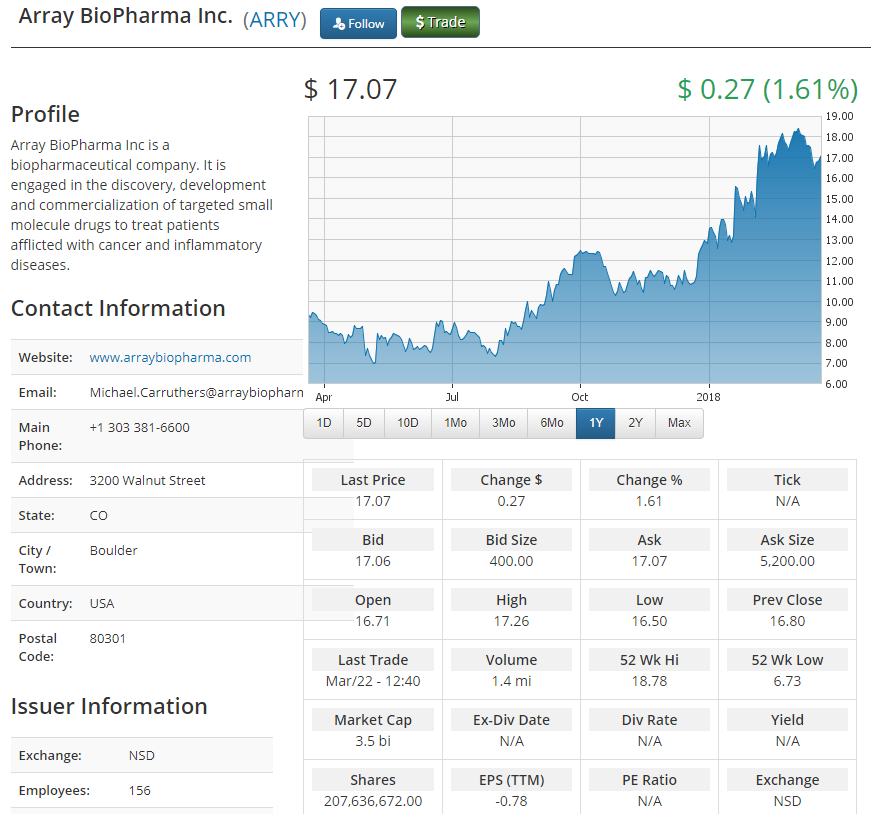