Are All Your Ducks in a Row?

Positioning your portfolio for the market's next move

If you’ve paid any kind of attention to recent market headlines, you’ve surely seen the term “recession” among the most prominent topics in your newsfeed. This shouldn’t come as a shock, either––the global growth picture isn’t as rosy as it could be.

Take a look at Germany. There are wide indications that the world’s fourth largest economy is heading into a recession, with its GDP shrinking in the second quarter and its 10-year bond hitting a record-low negative yield. Some analysts warn that U.S. investors should be alert due to a potential spillover effect.

Then there’s the purchasing managers’ index (PMI), a forward-looking indicator I write about often. Right now, PMIs are falling around the world. In July, the U.S. Manufacturing PMI was 50.4, its lowest reading since September 2009. Thursday’s August “flash,” or preliminary, reading for the IHS Markit U.S. Manufacturing PMI dropped even lower, coming in at 49.9, indicating contraction. According to Morningstar, this is the first time in nearly a decade that the reading declined below the neutral reading mark of 50.0. 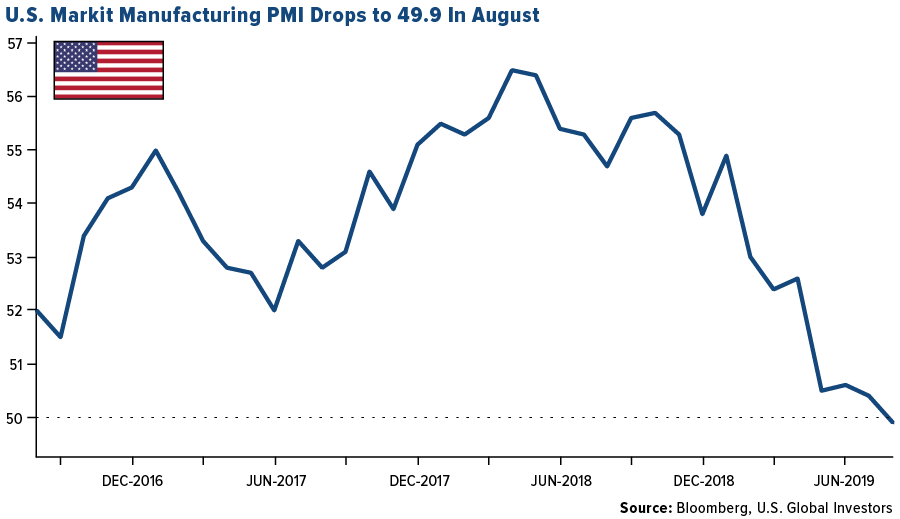 President Donald Trump and his economic advisors have been sharing their thoughts on whether or not a recession could be making landfall in the near future. Trump says the U.S. economy is “doing really well,” and last Sunday, economic adviser Larry Kudlow downplayed signs that a recession is in the works. 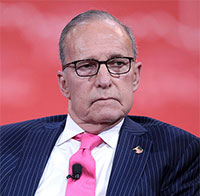 Kudlow’s comments are notable here due to his questionable record of forecasting economic pullbacks. Before the 2007-2008 financial crisis, for example, he wrote: “There’s no recession coming. The pessimists were wrong. It’s not going to happen…”

We’ll have to wait and see if he’s gotten any better at making these types of calls. But if you remember, Kudlow was wrong about goldduring most of its incredible run-up in the 2000s.

Although the White House insists there isn’t problem, certain actions are telling a different story.

Trump has made it clear to Federal Reserve Chair Jerome Powell that he believes interest rate cuts should be made more aggressively; Trump has delayed imposing additional tariffs on goods imported from China until after the Christmas shopping season; and the White House is even weighing whether to cut payroll taxes.

The Fed and the European Central Bank (ECB) released minutes from their recent policy meetings last week, but all eyes were fixed on Powell’s speech at the annual and much-anticipated Jackson Hole symposium, which took place this past weekend.

At the symposium, central bankers met and discussed what can be done, monetarily, to keep the world economy on track.

On Friday, Powell said that the U.S. economy is close to both goals of price stability and full employment, and that he will act appropriately to sustain the expansion. He did, however, comment that the global economic outlook is deteriorating, talking specifically at length regarding tariffs and trade wars.

Certainly after Friday’s announcement from China regarding new tariffs on $75 billion worth of U.S. goods, many including a variety of agriculture and commodity-focused products, we’re curious to learn what comes out of the full weekend of discussions. In conversing over the news with analysts in Canada today, for example, some ponder whether this direct hit to the farm belt was done to sway opinions against the U.S. President. Stay tuned…

Expect the Best, Prepare for the Worst

The powers that be are all working on ways to prevent, or at least lessen, the effects of a recession, whether that is fiscally (President Trump and Congress) or monetarily (the Federal Reserve). Government policy is a precursor to change, after all, so it’s important to follow these decisions closely.

I encourage you to consider what you will be doing in the event of a pullback. How will you prepare your portfolio?

As I’ve written about many times, gold has traditionally been a good hedge in times of economic instability. The chart below is a perfect illustration of how gold can benefit your portfolio during a market downturn.

I continue to advocate for the 10 Percent Golden Rule of having 5 percent in physical gold or beautiful gold jewelry, and 5 percent in well managed gold mutual funds or ETFs, rebalancing quarterly.

What’s Next for Gold?

Recently I said to buy gold in the dips, after witnessing the yellow metal soar above $1,500 an ounce for the first time since September 2013. With gold up two-and-a-half standard deviations, the theory of mean reversion says it will be due for a correction. Indeed, it’s receded somewhat from its 52-week high of close to $1,550, though it’s still above $1,500.

As you can see in the chart below, gold looked overbought and began to correct at the start of last week. On Wednesday, however, the yellow metal rose 1 percent on news that an additional inversion in the U.S. Treasury yield curve occurred. Unfavorable economic data out of the eurozone also continued to push for its haven appeal. 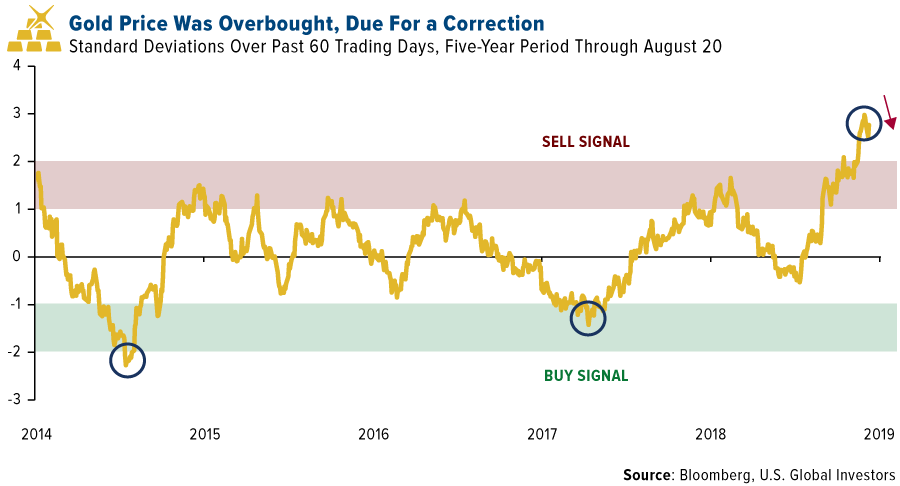 Mobius isn’t the only one with gold on the brain. Interestingly enough, we’ve seen a spike in traffic to our gold-themed pages since the start of 2019. In particular, visits to our gold-focused ETF page from January have jumped over 200 percent from this same time frame in 2018. The yellow metal is top of mind for many investors and I believe this will continue to be the case.

Mobius isn’t the only one with gold on the brain. Interestingly enough, we’ve seen a spike in traffic to our gold-themed pages since the start of 2019. In particular, visits to our gold-focused ETF page from January have jumped over 200 percent from this same time frame in 2018-, (also, a spike in airline-related and travel content).

The yellow metal is top of mind for many investors and I believe this will continue to be the case.

Want to learn more about gold and how it could benefit your portfolio? Subscribe to my award-winning blog by clicking here!