A Closer Look at the CHIPS Act and Its Implications for the U.S. Market

The CHIPS Act isn’t the only incentive U.S.-based manufacturers are getting.

The bipartisan Creating Helpful Incentives to Produce Semiconductors for America Act, or CHIPS Act, was signed into law last week, setting aside $52 billion to boost domestic semiconductor research and production. We believe government policy is a precursor to change, and if that’s the case, we may soon see a big shift in the U.S.’s global market share of semiconductor chips.

These integrated circuits are the hidden brains of nearly everything that fills our lives, from vehicles,  smartphones, TVs, washing machines and even diapers. Without them, nothing would function. Global demand for chips is growing at an alarming rate and will only accelerate further as more and more devices are designed to be “smart” and connected. According to ASML Holding ( Chart ASML - $650.31 17.08 (2.559%)  ), the world’s leading supplier to the chip industry, there are an estimated 40 billion connected devices right now, and by 2030, this number is expected to increase to a jaw-dropping 350 billion.

Put another way, the worldwide semiconductor market is forecast to increase 16.3% this year, which would be the second straight year of double-digit growth, according to  the World Semiconductor Trade Statistics. In 2023, growth is expected to be a more moderate 5.1%.

Semiconductor Use in Automobiles

Consider the growth in automobiles’ chip use alone. In 2021, each new vehicle contained close to 300 different semiconductors, a massive 40% increase from just two years earlier, according to research by Goldman Sachs. 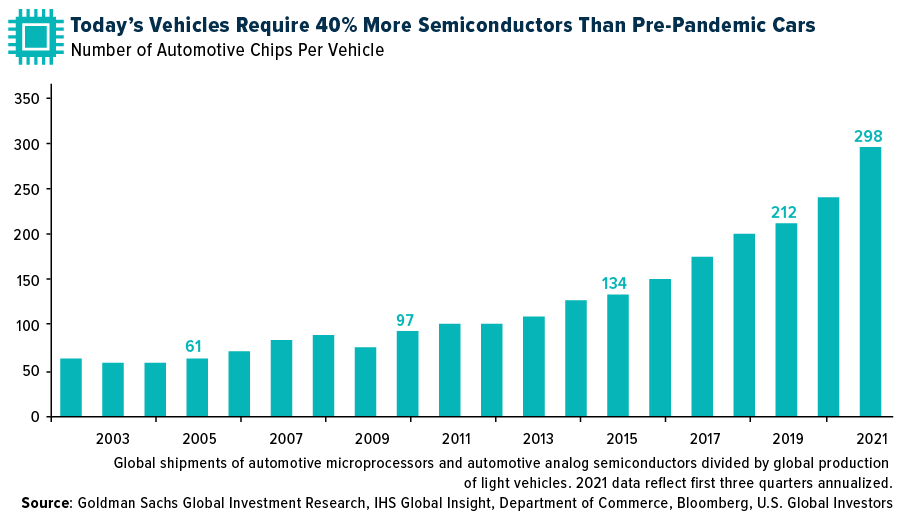 This is due in large part to the expansion of electric vehicles, advanced driver assistance systems (ADAS) and other technologies. A Tesla Model 3, for instance, is estimated to use more than twice the number of chips as an internal combustion-powered vehicle.

As you likely know, the pandemic lockdowns of 2020 exposed huge supply chain vulnerabilities for a number of goods coming into the U.S., including semiconductors. Without fresh chips, most automakers have been forced to cut production. According to Automotive News, the North American market was short as many as 100,000 new vehicles in the week ended August 7, thanks to the ongoing chip shortage.

This has driven up demand (and prices) for used cars and trucks. The Manheim Used Vehicle Value Index shows that, despite a slight decrease from June to July, preowned auto prices in the U.S. were up 12.5% on average in July from the same month last year.

To be clear, the U.S. is no slouch in this department. Semiconductors rank as the nation’s fifth largest export, and U.S. companies represent seven of the top 10 global chipmakers by market cap. 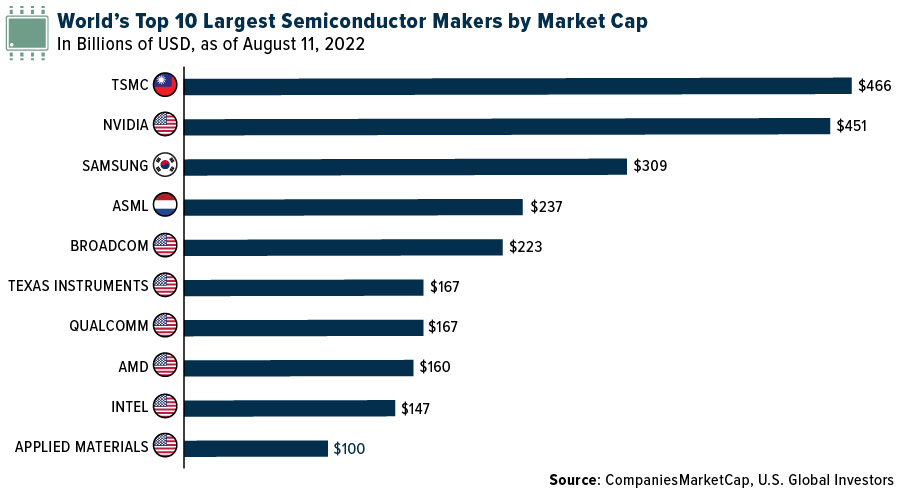 Nevertheless, the U.S. today represents only 12% of global semiconductor manufacturing capacity, despite the technology being invented in the U.S. That’s according to Keith Jackson, president and CEO of the Semiconductor Industry Association. Jackson rightfully added that chip technology is “strategically important to our economy and national security.”

If you refer back to the first chart in this piece (“Semiconductor Sales Forecast by Region”), it’s clear the momentum has been gaining for overseas manufacturers. That’s particularly true for Korea’s Samsung ( Chart SSNLF - $0. 0. (0%)  ) and Taiwan’s TSMC ( Chart TSM - $93.13 0.17 (0.182%)  ), whose largest customer is none other than Apple. In 2021, the iPhone maker accounted for over a quarter of TSMC’s total annual revenue of $57 billion.

The CHIPS Act isn’t the only incentive U.S.-based manufacturers are getting. Just two days after the legislation was signed into law, New York committed an additional $10 billion in corporate tax breaks for chipmakers who build or expand semiconductor fabrication plants, or “fabs,” within the state.

Although nothing has been announced yet, it’s possible that other states may roll out similar tax incentives to relocate within their borders. 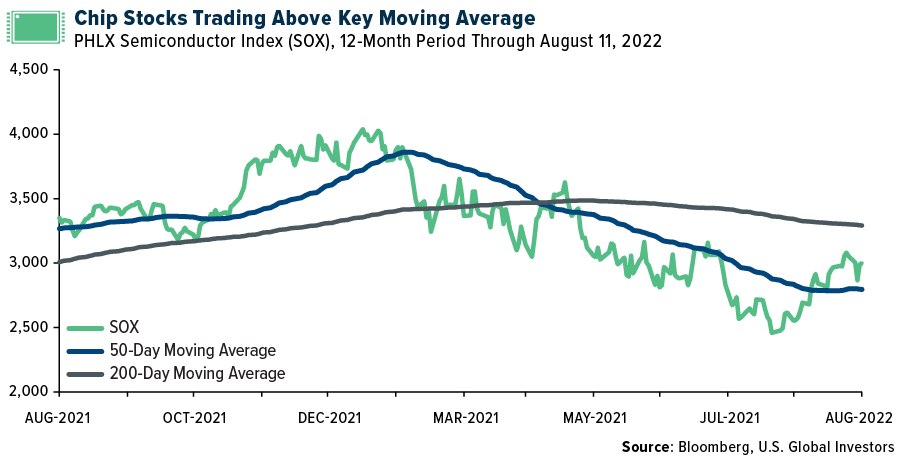 Shares of the top 30 largest U.S. chipmakers, as measured by the PHLX Semiconductor Index ( Chart  - $0.  (0%)  ), have responded positively in anticipation of the law’s passage. Last week marked the sixth straight week that SOX has recorded a positive gain, and the index is now back to trading above its 50-day moving average. As of Friday, shares were still about 24% below their all-time close high on December 27 of last year, so it appears there could be plenty of upside potential.